The 12 Films of Christmas 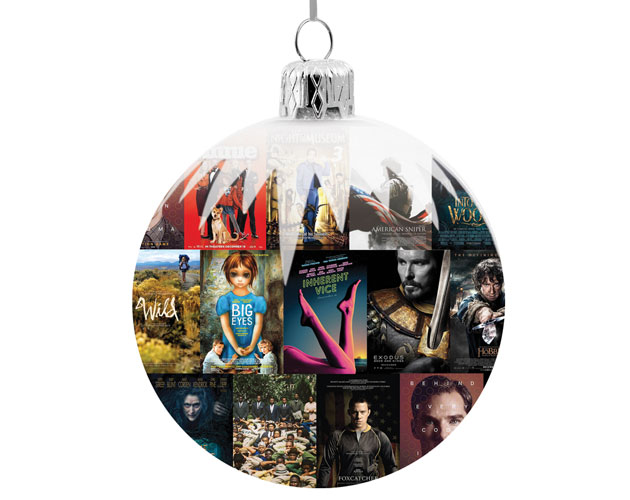 Sing along, folks! On the 12th day of Christmas, Hollywood gave to me …

12 CELEBS A-SINGING
With a nod to 1978’s The Wizard of Oz adaptation The Wiz, which reimagined the film with an African-American cast, producers Will Smith and Jay-Z give Annie a modern makeover by setting it in the Big Apple of today with 11-year-old Quvenzhané Wallis as the endearing orphan.

11 STARS RETURNING
No museum display case on Earth can hold franchise favourites like Teddy Roosevelt and Sacagawea, who return in Night at the Museum 3: Secret of the Tomb. Sadly, the movie also marks the last live-action film performances from both Robin Williams and Mickey Rooney.

10 MEDALS FOR SNIPING
Bradley Cooper starring in a Clint Eastwood-directed Iraq war film based on the true story of a deadly U.S. marksman. American Sniper as the next Zero Dark Thirty? Perhaps, but that’s, ahem, just a shot in the dark.

9-TY DAYS OF HIKING
Based on the memoir Wild: From Lost to Found on the Pacific Crest Trail, Reese Witherspoon brings the true tale of author Cheryl Strayed’s journey to life in Wild, directed by Jean-Marc Vallée (Dallas Buyers Club).

7 NOVELS WAITING
The first film adaptation of one of Thomas Pynchon’s eight novels, Inherent Vice, helmed by Paul Thomas Anderson. Word is the reclusive author makes a cameo – a moot point given almost no one knows what he looks like.

6-THOUSAND EXTRAS LEAVING
With all the big budget effects, actors and thousands of extras to pay, Exodus: Gods and Kings may need a turnout of biblical proportions to break even. “Let my people go … to the theatre to see this film!”

5 3-D ARMIES
Sauron is coming, Smaug is mad and the dwarves better duck for cover. The Hobbit: The Battle of the Five Armies wraps up this Tolkien trilogy with a bang at a very lifelike 48 frames a second.

4 FAIRY TALES
The storybook-inspired musical Into the Woods calls on a cast of Broadway and Hollywood heavyweights – including Meryl Streep and Johnny Depp – to bring the Sondheim classic to the big screen.

3 HISTORIC MARCHES
Selma, a vivid and powerful drama depicting the Selma to Montgomery marches of 1965 – landmark events in the Civil Rights Movement, which ushered in the Voting Rights Act later that year.

AND AN OSCAR NOD FOR BEN AS TURING
Benedict at his Cumber-best as British mathematician Alan Turing, breaking Nazi codes and audience hearts in The Imitation Game while making himself an early Oscar favourite.