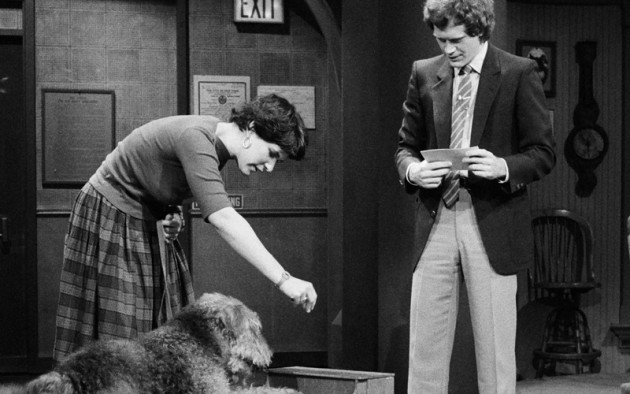 On May 20, David Letterman, the last remaining Carson-era late-night host, hangs up his microphone for good. Here, our top 10 list of favourite Dave moments

His 33 years behind the desk – a late-night record – wasn’t without its share of emotion (such as Dave’s poignant post-9-11 show or his interview with terminally ill Warren Zevon) and even controversy (when he made an inappropriate joke about Sarah Palin’s underage daughter, which he apologized for). But through it all, it’s the laughs he’ll be remembered for.

To celebrate the man who brought irony to the mainstream, we’ve compiled our Top 10 list of favourite Dave moments.
10 When comedian Andy Kaufman and pro wrestler Jerry Lawler got physical on Late Night. Dave tried to lighten the mood with lines like, “Welcome back to the show, ladies and gentlemen. As you can tell Andy Kaufman is here, sort of.”

9 Suiting up in Velcro and throwing himself against a wall, Stupid Pet/Human Tricks and tossing random items off buildings: some of the many ridiculous exploits that helped established Dave as the anti-talk show host.

8 Johnny Carson’s final TV appearance in 1994, arriving to a rousing standing ovation to hand Dave his Top 10 list, sit behind the desk and then leave without uttering a word. “What’s the point?” an awestruck Dave quipped. “Like I’m going to continue after that.”

7 Oprah and Dave reconciling after a near two-decade “feud,” which wasn’t helped by Dave’s “Oprah/Uma” stunt at the Oscars, on a 2005 episode of The Late Show.

6 Dave’s eyes bugging out of his head when Drew Barrymore hopped on his desk and flashed him in 1995. He responded with, “I can’t thank you enough for that.”

5 Dave thwarts an extortion attempt by admitting to sleeping with staffers on his show, employing a level of transparency that scandal-ridden celebs and politicians could learn from.

4 Dave’s debate with Fox News pundit Bill O’Reilly over the war in Iraq. He manages to maintain a sense of humour through his frustration, charging, “You’re putting words in my mouth, just like you’re putting artificial facts in your head.”

3 When Jimmy Fallon was chosen as Jay Leno’s Tonight Show successor in 2013, Dave poked fun at himself, joking, “I got a call from my mom today. She says, ‘Well, David, I see you didn’t get The Tonight Show again.’” Letterman’s longstanding feud with Leno began when Jay was awarded The Tonight Show in 1992.

2 A presidential putdown that epitomized Dave’s love of targeting a particular U.S. commander-in-chief: “The White House is giving George W. Bush intelligence briefings. You know, some of these jokes just write themselves.”

1 The first show back after heart surgery, proving that even a near-death experience couldn’t quell Dave’s sense of humour. “While I was gone, I had quintuple bypass surgery on my heart. Plus, I got a haircut.”