Best of Enemies Director on Gore Vidal vs. William Buckley 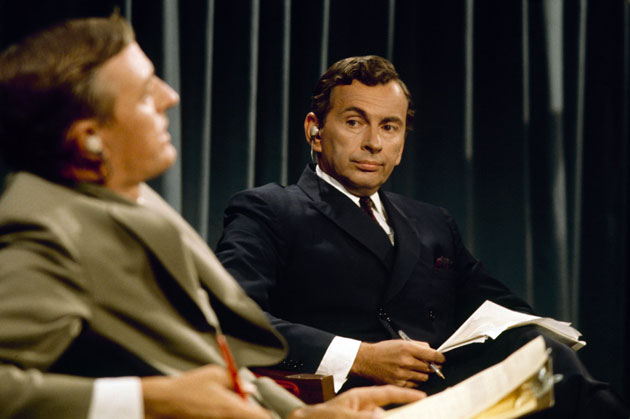 Morgan is the co-producer and co-director of Best of Enemies, a documentary now playing in Toronto.

I asked him why he made a film about a series of televised debates between two effete, smug public intellectuals — liberal Gore Vidal and conservative William Buckley — that took place a half century ago during the Republican and Democratic conventions.

“A friend of mine got a bootleg DVD of the debates and he shared it with me in 2010,” he explained. “I was struck immediately by how contemporary it all was, how it anticipated the culture wars that we live in now.

“And I was riveted by their anger, the enmity between them.”

My question was really dumb because the film is indeed riveting. And also immensely entertaining.

Morgan and his filmmaking partner carved the most succulent morsels from ten 15-minute debates and added context and commentary.

“They brought a command to language, history, literature, politics, and economics,” said Morgan, about Buckley and Vidal. “They had all the knowledge at their fingertips and employed it. Now, when you see a political show, there’s all the yelling but none of the substance.”

Vidal and Buckley obviously loathed not only each other’s political philosophy but also each other.

Buckley was repulsed by Vidal’s most famous book, Myra Breckinridge, about a transsexual. When he refers to it, he practically hisses the title. Vidal, meanwhile, is shocked by Buckley’s assertion that “freedom breathes on inequality.”

“These guys each thought that the other one was going to take down the nation,” observed Morgan.

Buckley and Vidal embedded their loathing in what was arguably the most eloquent, erudite language ever heard on commercial television news.

Except when Vidal scored his big win in getting under Buckley’s skin by calling him a “pro-crypto-Nazi.”

“Now listen, you queer,” he said, “stop calling me a crypto-Nazi or I’ll sock you in your goddamn face and you’ll stay plastered.”

“Those particular slurs they chose represented everything that the other had tried to deny,” explained Morgan.

“Buckley had cleansed the Republican Party of the John Birch Society, the kooks and anti-semites and had fastidiously made the conservative movement more responsible.

“Vidal was a campaigner for gay rights without proclaiming himself gay. He was against labels. He did not want to be stamped as anything.”

That’s why the explosive exchange was more than just name calling, said Morgan. “It was the culture wars brought to a head in a verbal blood sport.”

In the white hot summer of ’68, identity politics were being formed and the culture wars were being ignited, explained Morgan.

There’s been another big change since 1968, he said.

Because Vidal and Buckley shared the same facts, he said, “they could argue from different points of view about how to resolve the issues.

Morgan was heartened by the enthusiastic response to the film.

He added, “It suggests to me that there’s an audience that’s not being served. Maybe people want long answers from intelligent people. Maybe someone in this mediascape will take a chance on that.”