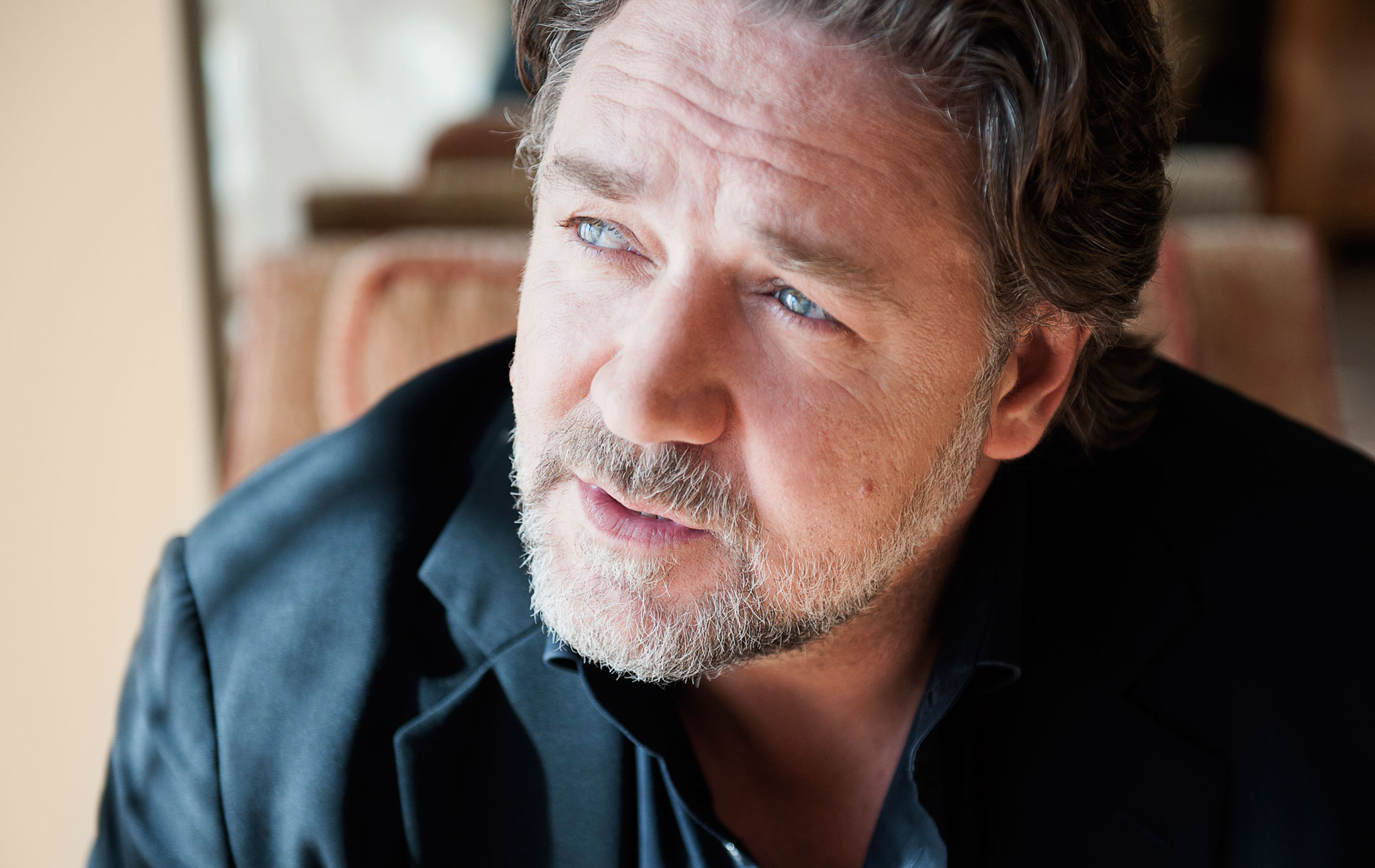 A surly thespian with a penchant for pugilism or a warm and funny regular guy? Kim Izzo meets the real Russell Crowe.

The couple with the most chemistry at this year’s Oscar ceremony wasn’t George and Amal. That honour went to an unlikely duo: actors Russell Crowe and Ryan Gosling, whose backstage and onstage banter as presenters sent the Twittersphere into a tizzy. The two dudes quipped and bantered like an old married couple with high-octane testosterone.

While I wasn’t shocked that Gosling, a Canadian, was a natural comic, Crowe’s ease with the material was a surprise. I’ve long admired his work onscreen—L.A. Confidential, The Insider (Oscar nominated), A Beautiful Mind (Oscar nominated), Gladiator (Oscar won)—yet he never struck me as a laugh-a-minute kind of guy.

Don’t get me wrong. Hollywood is rife with tough guy actors taking on lighter fare—Clark Gable and Spencer Tracy excelled in comedic roles as has Robert De Niro more recently. Perhaps aging softens a leading man’s edge and, at 52, Crowe has passed the middle-age marker. But still, he seems different. More brooding. More simmer beneath the surface. More unpredictable.

Take his arrest in June 2005, following an incident that saw Crowe hurling a phone at a New York hotel employee who gave him attitude when he couldn’t place a call to his wife in Australia (never mind that many of us want to throw items when they don’t work). His temper and public outbursts have been documented and dissected in tabloid rags for years.

However, more recent evidence shows a different side.

In May 2014, British comedian Ricky Gervais tweeted “Who am I getting drunk with at the moment?” and included a hilarious photo of himself and Crowe in an inebriated state, to which Crowe tweeted back “Roger Moore?” You wouldn’t necessarily think of him as a Tweeter, yet Crowe tells me he likes the immediacy of social media, in no small part to instantly debunk nasty rumours. A quick scan of his Twitter feed and you see he uses it to do everything from write poetry, share his travels and yes, have a go at friends.

Then when Crowe made his hosting debut on Saturday Night Live this past April, he poked fun at his “very long career now in comedy” and “starring in so many hysterical movies over the years.” Attempting to make his case by using the guffaw-fest that is Gladiator as an example, running a violent fight scene from the film to prove his point, much to the delight of the live audience.

Which man would I find myself with during our chat about The Nice Guys? The warm and funny or the surly?

Next: Who is the real Russell Crowe?

For starters, he loves Newfoundland.

A lifelong musician—in the ’90s, he fronted the rock band 30 Odd Foot of Grunts—in 2005, he began working with NewfoundlanderAlan Doyle, perhaps best known for the band Great Big Sea. The two became friends after meeting at an NHL Awards show and have collaborated on two albums, My Hand, My Heart in 2006, and The Crowe/Doyle Songbook Vol. III released in 2011, with a third album on the way. Newfoundlanders are famous for their wit—think Mary Walsh, Shaun Majumder and Rick Mercer—and Crowe’s love of The Rock saw him guest starring in the former CBC drama Republic of Doyle in 2012, which was filmed in the province.

“I love the spirit of Newfoundland,” Crowe explains to me. “The people and the vibe, just makes that place so magical.”

Doyle concurs. “R.C. is fond of most places that are their own place; that have histories, stories, dialects, food, architecture, geography, and art that is theirs and theirs alone,” he explains. “Newfoundland is like that, and I think he saw it from day one. Also, I think it is fair to say he’s fond of those who work hard and play hard. No shortage of that in Newfoundland.”

Intensity for work and play aside, is it possible that Crowe has merely been misunderstood over the years? Definitely.

“Partly because of the type of roles he’s played and partly because of the way he’s been portrayed in certain kinds of media, he’s often seen as an unapproachable or deadly serious fella,” says Doyle. “Nothing could be further from the truth. I’ve spent more time with him in the kitchens of posh restaurants chatting with the dishwashers than sitting in some VIP roped-off area.”

During my time with Crowe, he is warm and engaging. Definitely not the type of star who considers promoting his movies beneath him. He wants to talk about the work, sure, but he does so in such a casual way, like we’re two buds shooting the shit over a pint. Nothing formal. Nothing stand-offish. He’s generous and interested in entertaining me with personal stories. The only contentious bit came when out of the gate I tried to point out that despite his SNL stint, he wasn’t known for comedy.

“Yeah, but there’s a lot of laughs in Gladiator,” he insisted. Who am I to argue with Maximus?

The Nice Guys was co-written and directed by Shane Black, a Hollywood wunderkind in the ’80s, whose first screenplay was the blockbuster buddy-cop picture, Lethal Weapon. Black has since turned to directing, including Ironman 3 and the upcoming Predator reboot. The Nice Guys is more in keeping with his directorial debut, Kiss Kiss Bang Bang, film noir with a comedic bent—a movie with more than its fair share of plot twists, nudity, violence and, yeah, laughs. All of which attracted Crowe to the project.

“It was great writing. At the end of the day that’s what I always respond to. It has to be what’s on the page,” says Crowe.

Upon hearing that Crowe was interested, Black hopped on a plane to Australia, where the New Zealand born actor lives on a sprawling ranch in New South Wales, one of his homes where he lives with his two sons, Charles, 12, and Tennyson, 9. Crowe is separated from their mother, his wife, Danielle Spencer.

“The very first thing Black said to me stuck with me, and I just thought this guy is very complicated and probably an interesting fellow to get to know,” Crowe says.

What was that first thing? Crowe chuckles. “I asked him if he wanted a drink and he said ‘No, I prefer not to have a drink. You know what they say, one drink leads to handcuffs.’ That’s Shane’s black sense of humour.”

I bite my tongue and avoid making the obvious handcuff reference to Crowe while he holds a phone in his hand. One of the biggest strengths of The Nice Guys is where this story began, the chemistry between Crowe and Gosling. As part of promotion for the film, a series of hilarious online videos see the pair attending couples’ therapy to deal with Crowe’s “anger issues.” I wondered if their chemistry was instant. “That’s what chemistry is,” Crowe points out. “It’s very simple, I enjoy his company and I think he enjoys mine. He has a sense of humour that just gets straight to the core of mine. That little bugger can make me laugh at the drop of a hat and I’m not usually that bloke.”

This was the first project the two actors have worked together on but they had been in touch previously about others. Crowe says that he got in contact with him once before to arrange a private dinner. The guest list was to include Crowe and his wife, Gosling and his girlfriend at the time—just the four of them. But then it turned into what Crowe describes as “a bit of an embarrassing moment.”

“When my wife and her mom found out that we were having dinner with Ryan Gosling, it just led to her inviting about a dozen or more girlfriends, which I didn’t find out about until about two or three hours before the dinner,” laughs Crowe.

“I’m like, oh God, this is just not the way it’s supposed to be, but I’ve got a bunch of mates [in L.A.], so I invited them to balance out the room. So Ryan is expecting to be walking into a private dinner to meet my wife and me and instead there are 24, 26 people on the balcony of a bar. It was more like a cocktail party, and it wasn’t until we actually started work on The Nice Guys that I got to explain what had happened that day.”

Next: The Nice Guys took 15 years to make

Ryan Gosling and Russell Crowe in “The Nice Guys.”

So there you have it. Gosling’s power over women—see the “Hey Girl” memes if you require proof—extends even to females who are already surrounded by (and married to) sexy, brawny, Oscar-winning men. But only a “nice guy” like Crowe would see the humour in the situation and not fly into a jealous rage.

The Nice Guys took nearly 15 years to get made, eventually being shepherded into production by legendary producer Joel Silver, who produced Lethal Weapon among dozens of others. I asked Black about casting such an intense actor as Crowe.

“There was no rewriting to accommodate Russell’s serious side. We knew he could do that. If anything, he was game to try something different, to expand, and I was pleasantly surprised as well,” Black says.

“Crowe has precision and gravitas. My instinct is to play it as a thriller first and comedy second, and the characters will find little bits of humour in the midst of being shot at or tracking down a clue, and there’s just a camaraderie that I find very funny, and I knew that he could do that.”

One thing that Crowe is definitely serious about is rugby. He is the co-owner of the South Sydney Rabbitohs, who won the Australian Grand Final in 2014, the first time the team had done so in 43 years. He has spoken in the press about how this extracurricular activity was partially to blame for his marital woes, citing his wife’s frustration that he took on such a huge task in addition to all the travel he does for his day job.

Doyle explains that the key to working with Crowe is to be as committed as he is. “He’s an incredibly hard-working person, and it would be tough to work with him if you were not as passionate about the project as him,” says Doyle. “Luckily, I love every chance I’ve gotten to work with him in TV, film or music, so it’s always been a fun, challenging and rewarding experience. In particular, we both find writing and singing songs to be quite a bit fun, too. We might even have the odd pint while we are at it.”

But even friendship has its limits. In December 2014, Crowe posted images of himself “stood up in Gander.” Tweeting, “Can’t believe @alanthomasdoyle and @allanhawco didn’t drive 4 hours to meet me in Gander. Guess I’m partying alone” And later to rub it in, “The coffee at the airport in Gander is better than Tim Hortons. Yes, @alanthomasdoyle I said that.”

Ah, Tim Hortons, it doesn’t get much more Canadian than that. And having worked in Toronto, Canmore, Calgary, Winnipeg and Vancouver, Crowe loves Canada. “I just get along easily with Canadians. There’s actually one huge part of my family, and I’m talking like 10 brothers and sisters, who left Wrexham and Wales and moved to Canada back in the 1920s,” he tells me. “So there’s a massive amount of Crowes running around in Canada.”

When my conversation with Crowe comes to an end, he apologizes for being rushed along to the next interview and says, “Thank you, love. Look after yourself. Have a great day.” And then he’s gone, leaving me without a doubt that he is the kind of bloke you want to hang out with in a bar, at a game or yes, at the Oscars. Perhaps I was wrong. Maybe Gladiator is funny.