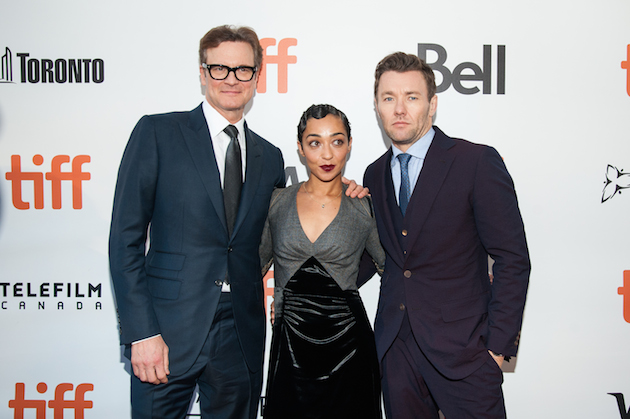 When three isn’t a crowd… rising star Ruth Negga looks like the kitten who got the cream as she’s sandwiched between Colin Firth and Joel Edgerton at the North American premiere of Loving. Based on a true story, Negga and Edgerton play the Lovings, a married couple who were arrested for their interracial marriage in 1958 Virginia and took their case all the way to the US Supreme Court. British Oscar winner Firth is one of the film’s producers. Can we just add that we are very jealous of Negga at this moment?

Ruth Negga is being buzzed about as one of Hollywood’s next big things… her portrayal of Mildred Loving is considered a potential Oscar contender. On the TIFF red carpet Negga wins the best in show award for her stunning Marcel Wave and berry lips.

Aussie hunk Joel Edgerton went blonde for his role as Richard Loving. Here he returns to his normal – and hearthrobbing – dark hair. We dig the barely-there chin scruff too.

When you have a statement dress such as the one Rachel Weisz chose for the premiere of her film Denial, beauty is kept clean and simple. Slick hair, pale lip and smoky eye do the right thing on the red carpet.

We’ve seen our fair share of beards at this year’s TIFF. Suffice to say this men’s grooming trend is here to stay. On Oscar Isaac, in town for the premiere of his film The Promise, the flecks of grey adds to his already distinguished look. He’s a classic. And we can’t wait to see him in the next Star Wars.