The Juice is Let Loose (on Parole): Our Ongoing Fascination with O.J. Simpson 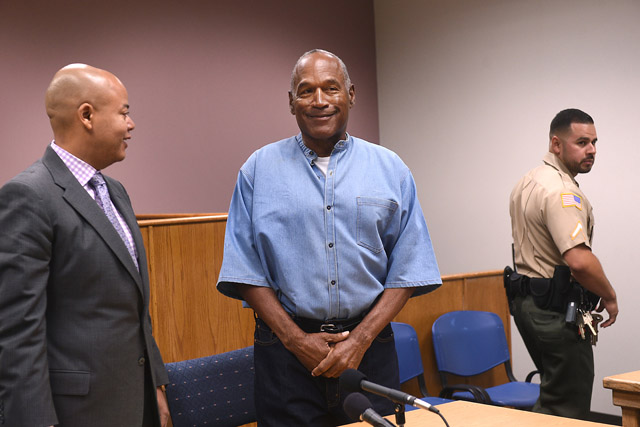 On the same day that O.J. Simpson, 70, was granted parole by Nevada authorities after serving nine years of a 33-year sentence, A&E announced the October debut of Guilty: The Conviction of O.J. Simpson, a two-hour network documentary that promises never-before-heard tapes from the “Trial of the Century” and an in depth look into the inner workings of the Juice’s mind at the time.

If it seems a little like O.J.-overload, it’s because it is. Twenty-two years after a jury foreman stumbled over the pronunciation of the name “Orenthal James Simpson” en route to delivering a “not guilty” verdict in the murders of the former NFL star’s ex-wife Nicole Brown Simpson and Ron Goldman in the most publicised and media-scrutinized criminal trial in history, people continue to examine its own conclusions about the former All-Star running back.

Since 1995 legal reps, social commentators and pop culture pundits have dissected the trial, evidence and verdict, which divided viewers along race, class, gender and even sports lines. And today, with 1990’s nostalgia in full force, it’s no surprise that O.J.-obsession washed ashore on the nostalgia tide that brought recent reboots of The X-Files and Gilmore Girls, Power Rangers and the sequel series Fuller House. After all, the hours of broadcast time devoted to the O.J. trial proved far more culturally relevant than the latest hijinks in the Tanner household.

The Simpson trial cast of characters includes hard-nosed prosecutors and C-list celebrity witnesses, a defense attorney with a golden tongue – “If it doesn’t fit, you must acquit” – and a high-speed white Bronco car chase. Heck, even back then there was a Kardashian in the courtroom and Vanity Fair has traced the whole Kardashian-led reality moment back to the trial. And at the centre of it all, a beloved, all-American, African-American football hero accused of murdering his white blonde wife and Goldman. They don’t write legal dramas as juicy – no pun intended – as this, because you can’t. Truth, after all, is stranger than fiction.

Instead, we rely on true crime redux, like the star-studded 2016 mini-series The People v. O. J. Simpson: American Crime Story, which transported viewers back to every nail-biting twist and turn of the Simpson saga, with reminders of 90s fashion trends and lead prosecutor Marcia Clark’s infamous perm hairdo thrown in for good measure. It wracked up Emmys and Golden Globes alongside critical acclaim and ratings, as did the 2016 ESPN doc O.J.: Made in America, which landed an Oscar for Best Documentary Feature at this year’s Academy Awards. Even disgraced former LAPD detective Mark Fuhrman, whose use of racial slurs was made public in court, and who refused to admit, under oath, that he didn’t plant a bloody glove at the Simpson/Goldman crime scene in an attempt to frame O.J., resurfaced recently, downplaying the increasing number of fatal police shooting against unarmed African-Americans in recent years.

Of course, Simpson did his part to stoke his newfound infamy. After losing a civil trial to the Goldman family he reportedly co-operated with publishers on a book detailing how he would have committed the killings if he did do it, in addition to occasional brushes with the law. And then, on October 3, 2008, exactly 13 years to the day that he was found not guilty in the deaths of Nicole Brown Simpson and Ron Goldman, he was found guilty of armed robbery and kidnapping following a Las Vegas break-in and robbery of sports memorabilia Simpson claimed were stolen from him. Like in the murder case, tensions rode high after the verdict, with some calling the 33-year prison sentence by a female judge revenge for the 1995 murder acquittal. And the judge in question, Judge Jackie Glass, did what almost everyone else involved in an O.J. Simpson trial does — cashed in on her newfound fame. In her case, she became the host of Swift Justice, a reality courtroom show.

And now, with today’s parole and the possibility that Simpson could be released as early as October — the 22nd anniversary of his murder acquittal — the saga continues. Chances are, debate over the parole will join the debate over Simpson’s “not guilty” verdict 22-years ago as evidence of either how the American justice system works, or how it’s broken. Race, class, gender – it all plays a part. Social media will swarm with opinions and opposing narratives, which begs the question of how would social media, if it had existed in 1995, would have affected or even changed the perception of the trial?

Of course, in three years the 25th anniversary of the “not guilty” verdict will surely give rise to new O.J. revelations, new “never-before-heard” tapes, new perspectives and new books/TV shows/movies/media. All of which, it seems, the man at the centre of the story will take in from the comfort of his Florida home — out of jail but never, truly free.