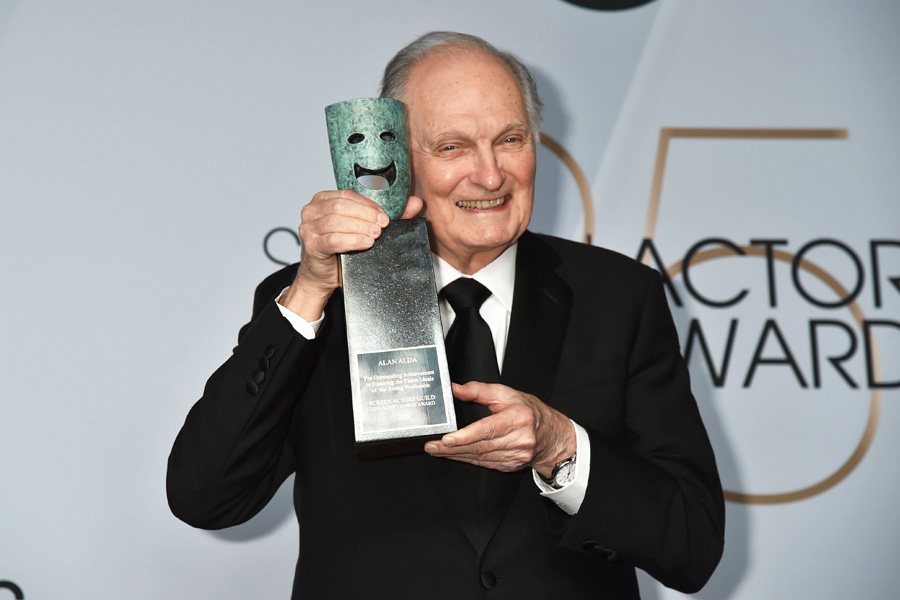 One day before his 84th birthday, screen legend Alan Alda stood before his peers and accepted the Lifetime Achievement Award at the 25th Screen Actors Guild Awards (SAG Awards).

“This comes at a time when I’ve had a chance to look back on my life … and I see more than ever now how proud I am to be a part of our brotherhood and sisterhood of actors,” the MASH star said when he took the stage following an introduction from Tom Hanks. “It may never be more urgent to see the world through another person’s eyes than when a culture is divided so sharply. But actors can help.”

He concluded his short acceptance speech with a plea, asking his peers to, “be playful and have fun and keep searching. It couldn’t hurt.”

It’s a sentiment Alda discussed when we spoke ahead of his appearance at ideacity (a ZoomerMedia property) in 2017.

“I find myself led by my nose all the time. I don’t have a master plan and I really am trying to cut down on how busy I am,” he told me then. “I think it’s just a product of my interest, my curiosity, the pleasure I get at accomplishing little things that keep me writing and acting, going on the road. But that’s one of the disadvantages of being led by your nose – everything seems interesting and you take everything on. Dogs who are led by their nose, they find everything interesting.”

Meanwhile, 71-year-old Glenn Close, fresh off a Golden Globe win earlier this month for playing the titular character in the film The Wife continued her award season run by picking up the SAG award for Outstanding Performance by a Female Actor in a Leading Role. The win marks Close’s second SAG award, which came 14 years after her first, prompting a speech that included the actress’ musing on the power of film in a world of screens.

Close also wore her grandmother’s wedding ring to the ceremony, noting in a pre-show interview that, “she wanted to be an actress and I only knew that after she died. She never would have been allowed to do that. I feel like I’m carrying the women in my family who were wonderful mothers and wives, but could have had more personal expression probably.”

At the beginning of the broadcast, before the show’s host, Will & Grace star Megan Mullally, 60, took the stage, the opening segment of the show brought another touching scene. The camera, spotlighting different actors and actresses who discussed their vocation, stopped on Geoffrey Owens, the 57-year-old actor who played Huxtable son-in-law Elvin Tibideaux on The Cosby Show. In late 2018 a photo taken of him working at the California-based grocery store Trader Joe’s went viral after appearing on the Daily Mail website, sparking calls of “job shaming” against those who mocked him for no longer working as an actor. The resulting attention landed Owens a handful of new acting gigs and the opportunity to deliver his address, outfitted in a black tuxedo, at the SAG Awards.

“So somewhere in the middle of the road of my life I found myself in the dark wood of unemployment and debt, but instead of switching careers like a sane person, I took a job at a local Trader Joe’s to see if I could hang in there with my career. And it’s actually worked out pretty well,” he explained, garnering laughs and applause. “I’m Geoffrey Owens and I am an actor!”

Owens followed Canuck comedy legend Mike Myers, 55, who used his moment to describe how he filled out a government of Canada vocational test when he was 17 and the results came back saying that his ideal vocation is a movie star.

Elsewhere on the show, Canadian actress Sandra Oh, 47, won the award for Outstanding Performance by a Female Actor in a Drama Series (Killing Eve) and actor Rami Malek won the Outstanding Performance by a Male Actor in a Leading Role award for his portrayal of legendary Queen front man Freddie Mercury in Bohemian Rhapsody. Malek took some time in his acceptance speech to acknowledge the spirit of the man he embodied on the big screen.

“I thank Queen and Freddie Mercury. I get some power from him that is about stepping up and living your best life and being exactly who you want to be and accomplishing everything you so desire. I feel that, and he allows us all to feel that. So this is again for him.”

And Chadwick Boseman, who starred as the titular hero in Black Panther, closed out the night with one of the most memorable acceptance speeches of the show in accepting the award for Outstanding Performance by a Cast in a Motion Picture on behalf of the film.

“Everyone knows that winning a SAG Award is the greatest honour an actor can win this weekend.” – host Megan Mullally in her opening monologue.

“And to SAG nominee Emma Stone, who just turned 30, our condolences. But we’re looking forward to your reverse mortgage commercials.” – host Megan Mullally in her opening monologue.

“The greatest honour of my life is to be nominated in the same category as Alan Arkin, who is an idol of mine and I think the reason I wanted to become an actor in the first place.” – Tony Shalhoub, 65, accepting the award for Outstanding Male Actor in a Comedy Series for The Marvelous Mrs. Maisel.

“Thank you Robert Mueller and everyone working to ensure we have sovereignty for the United States of America.” – Patricia Arquette, 50, accepting the award for Outstanding Performance by a Female Actor in a Miniseries or Television Movie for Escape at Dannemora.

“Thank you. This is reassuring.” – Jason Bateman, 50, accepting the award for Outstanding Performance by a Male Actor in a Drama Series for Ozark.