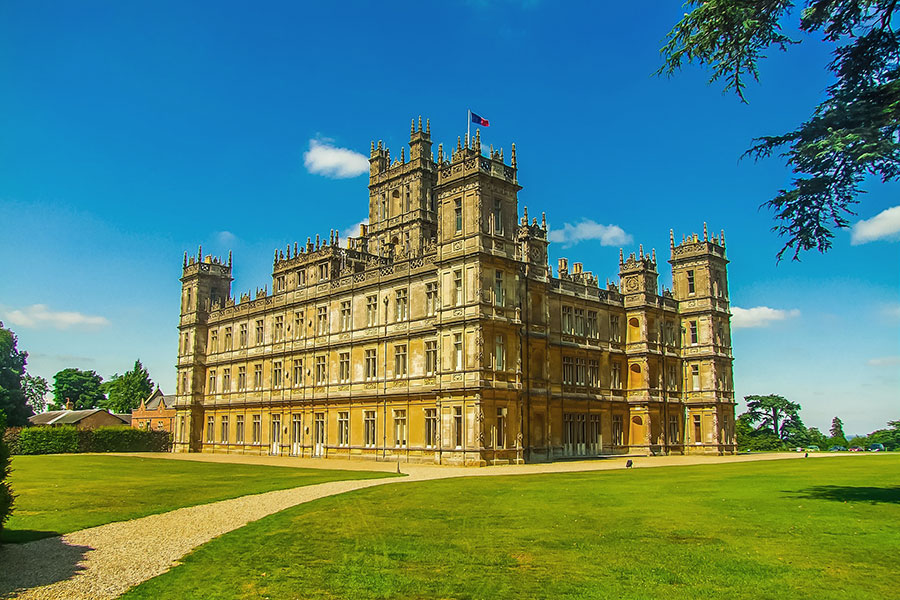 Highclere Castle, the titular estate of Downton Abbey, is having a sleepover. A new Airbnb listing offers two lucky fans the rare opportunity to emulate the king and queen of England (who in the movie, pay Downton an overnight visit) as they live, dine and sleep like royalty by spending the night in one of the opulent bedrooms at the historic home.

And as devotees of the series and upcoming feature film know, there’s nothing quite like waking up as a Crawley — the freshly-pressed newspaper, the silver salver bearing the morning post, the latest village gossip courtesy of the lady’s maid by way of the second footman, who heard it from the cook.

The opulent one-night only offering adds buzz to Airbnb Luxe, the online marketplace’s recent push into the luxury travel tier, and pairs exceptional homes with rarified experiences (the service has secured, for example, the Jamaican villa where Ian Fleming wrote his James Bond novels) and an around-the-clock travel concierge. The Highclere Castle listing also adds a patina of history and a sprinkle of Hollywood glitter dust, although it isn’t a straightforward rental transaction.

It’s a contest where booking applications — which open Oct. 1, with the event to take place in November — require a short essay, and the winner is selected based on creativity. Steeped in both aristocratic and television history, with views of rolling Hampshire countryside, butler service and opulent, gilded interiors (the green wallpaper in the drawing room is silk!), writing a few impassioned sentences and paying £150 (about $250 Canadian) seems a relative bargain.

The privately owned, stately home belonging to the Earl and Countess of Carnarvon has a starring role as the series’ estate and frequent shooting location, and the stay includes a private guided tour of the home and grounds.

Opportunities for fan photos and selfies are endless: Carry a breakfast tray up the elaborately carved, central oak staircase or, if you have the forethought to pack a wedding dress, re-enact Mary’s slow descent to exchange vows with Matthew). Cut a swathe, just like Carson striding purposefully down the path on the grounds by renowned landscape designer Capability Brown. Recreate cutting remarks over a traditional dinner with the Lord and Lady, and sisterly squabbles over hearty English breakfast buffet in the dining room the next day. Perhaps take a nap in Lady Mary’s bedroom, which has seen its share of action, from the untimely death of Turkish diplomat Kemal Pamuk to the dramatic birth of Anna and Bates’s son. There will also be opportunity to practice meaningful glances over cocktails in the “saloon,” the Gothic passageway from the formal dining room to the service area where so much intrigue and gossip takes place among the Downton staff.

The Airbnb listing is not the only chance to visit the titular mansion, of course — the public rooms open to visitors every summer, Viking Cruises recently added Highclere visits to their Great Homes, Gardens & Gin tour and other excursions, and soon the Belmond British Pullman luxury train will offer exclusive day trips. But the overnight stay marks a new phase in the historic property’s ongoing tourism windfall. “If you win the lottery, you’re winning something called cash,” is how Lady Carnarvon put the castle’s newfound fame to the New York Times early in the TV series run. “With Downton, it’s how it can turn into something like cash.” In other words: Expect to find a copy of her bestselling history Lady Almina and the Real Downton Abbey on the bedside table.

If that isn’t your reading taste, you might peruse one of more than 5,600 antique books that line the castle’s Victorian library (nicknamed the withdrawing room by Carnarvon ancestors) and sit at the small Napoleonic desk where Lord Grantham tends to the estate. Many of Downton’s pivotal decisions pertaining to affairs of the heart and business take place in this library. As you perch by the fireplace on the very same red sofas, know that the illustrious room is not only where Violet, everyone’s favourite domineering matriarch, likes to take tea on her frequent visits, and where the feisty dowager countess might upbraid Tom Branson for his impertinence or scold her daughter-in-law Cora for being too soft on the staff; it was also the location for the iconic masked ball orgy scene in Stanley Kubrick’s final film, Eyes Wide Shut.

Downton’s series finale featured Daisy bemused by Anna’s new handheld hair dryer, one of several incursions by modern technology into Downton’s dusty Edwardian world (“I think the future is no ladies’ maids at all, but we haven’t quite got there,” as sage Mrs. Hughes once observed, before she welcomed an electric toaster into her kitchen). Likewise a modern hair dryer, as well as shampoo, come with Highclere’s overnight stay. Should you want to livestream the experience, however, take note that the amenities generally harken back to 1927 and do not include Wi-Fi.