Antonio Banderas on His Heart Attack, Nearing Age 60 and His New Film, “Pain and Glory” 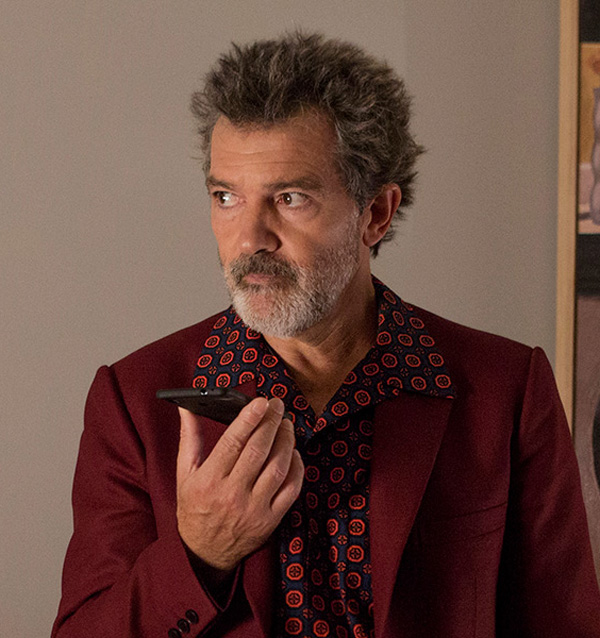 Throughout the 1990s and early 2000s, it seemed like Hollywood casting directors kept Antonio Banderas on speed dial for when they needed a suave, charming and mysterious hero who oozed sex appeal for their next big screen blockbuster. In fact, the ability to blow bad guys away in one scene and sweep a leading lady off her feet in the next aided Banderas’ rise to fame in films like Desperado, Assassins, Once Upon a Time In Mexico and, of course, the Zorro franchise.

“Sometimes the characters that are offered to you are determined by your look. And I had a very athletic youth and so romantic heroes all came to me,” Banderas, 59, says during an interview in Toronto. “And it was fun to a certain point and then you say, ‘No, I want something a little bit deeper than this that I can just dig.’”

In person, the actor appears with his shirt unbuttoned and a chain resting against his chest and retains those qualities that propelled him to romantic Hollywood hero status: he’s handsome, projects an air of mystery and keeps fit. He’s also charming in his soft-spoken way, listening attentively and answering thoughtfully as we sit on a hotel couch near a window that overlooks the downtown core.

Banderas’ latest film, Pain and Glory, made its Canadian premiere at the 2019 Toronto International Film Festival, fresh off a screening at the Cannes Film Festival a few months earlier that landed him the fest’s Best Actor award. Not long after, Spain announced the film as its official entry in the Best Foreign Language Film category at the Academy Awards in 2020.

In the movie, Banderas plays a semi-autobiographical version of the film’s real-life director, celebrated Spanish auteur Pedro Almodóvar, who, coincidently enough, gave the actor his first big screen break in 1982’s Labyrinth of Passion. The character in Pain and Glory — an aging and ailing film director attempting to reconcile with his past while struggling to find creative inspiration moving forward — allowed Banderas to “dig,” as he puts it, and relate on a deeper level, drawing on both the experience of his own heart attack in 2017 and his long personal relationship with Almodóvar.

MIKE CRISOLAGO: What was it like working again with Pedro Almodóvar, and playing a version of him in Pain and Glory, all these years later?

ANTONIO BANDERAS: It’s a beautiful story of a relationship of 40 years and eight movies and friendship and trust. And many things in the middle, because it was not a flat path for us. We had our ups and downs. And the creation of the [Pain and Glory] character, in reality, started nine years ago [making the film The Skin I Live In].

MC: What happened nine years ago?

AB: It was accidental … He called me again [for The Skin I Live In] and I went there with all of my American experience and I said to him, “Look at the type of actor I am now. I’ve learned a bunch of things and have new tools that I can use in order to create my characters.” And after a week rehearsing he said to me something like, “All those tools that you have, they must be good for your American directors but they don’t work for me. Where are you?”… I couldn’t believe the capacity he had to actually bring out of me a character that I didn’t even know I had. At that point I started a reflection of myself as an actor, that I should trust Pedro.

MC: And you did trust him when you filmed Pain and Glory nine years later.

AB: I put a lot of effort when he called me to do this movie and just cleaned myself from old patterns. I was probably a little bit locked into too many tools that I knew worked for me, tricks if you will, and I said, “Okay lets start from zero. I’m going to try and find myself in a different body, in a different look, in a different Banderas.” And recognizing many things, that actually I am grown up, that I am now a year from being 60 and that you shouldn’t be afraid of showing that to audiences and to yourself.

MC: In a recent interview you said, “When you start getting older, there’s space only for the truth.” What does the truth mean for you and in relation to this film?

AB: In a relationship with the film, there is a moment in which probably you start smelling the existence of death as something very certain. It’s the only certainty we have. And then you want to come to terms with certain things in your life — with your family, with your professional life, with your lovers. And that’s really what Pedro does … saying, “I want to say things that I never said but I wanted to say. I want to do the things I never did but I wanted to do.” And I think that’s one of the reasons the movie connects very strongly with many people, because there’s nobody who can look back and everything’s perfectly clean.

MC: Pedro said that this film is your rebirth as an actor and the start of a new era for you. How do you feel about that idea?

AB: I don’t know. I do feel like I took a step ahead. It has a lot to do with Pain and Glory and it has to do also with certain things that happened in my personal life — among them a heart attack that I had that actually showed me, exactly like Pedro is trying to express in this movie, to look back. Because when that happened, the things that I consider really important came up to the surface immediately and everything that I thought was important was not. It disappeared. So if I’m going to try to work less and work better, yes. I would love to do that … I’m not in a hurry for anything. I can wait. I have time. I don’t expect anything except the life that I have and the things that I am receiving — all beautiful and very welcome.

MC: What does winning Best Actor at Cannes mean to you?

AB: It was beautiful. I wasn’t expecting it, really. The night that I went to pick up the award at the Palais … I got to the top of the stairs and I think that [Thierry Fremaux, the director of the Cannes Film Festival] thought that I went to Spain or to London to my house and he said to me, “So how long did it take you to get back here?” I said, “Forty years. It took me 40 years, man.”

MC: Following your recovery from your heart attack, what advice can you offer for staying healthy and active as you age?

AB: Well, to follow all the prescriptions the doctors give and the advice they give. I was a smoker and it was gone like this [snaps fingers]. Cold turkey, stop. That’s rule number one. Then, exercise for me is very important. Don’t be in situations of stress — that’s very important. That’s more complicated for me. I live in situations of stress practically all the time. Take your aspirin every morning, so as to have your blood a little bit more liquid. If you follow all of those things, you do every six months your stress test, you’re going to be fine. But you have to do it. And drinking — not too much. If you drink a little bit of red wine a day, fine. But that’s it.

Pain and Glory is in theatres on October 18.

Robbie Robertson Talks TIFF, the Band and “Once Were Brothers”