On Mother’s Day, We Look at Some of Our Favourite TV Moms 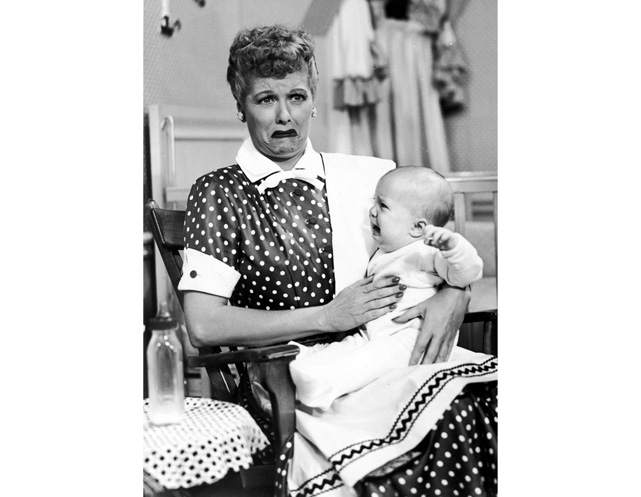 “Life began with waking up and loving my mother’s face.” — George Eliot

This Sunday, children across the country will celebrate Mother’s Day by honouring their moms in ways that they most appreciate. Some mothers want to enjoy flowers or chocolates, some enjoy a nice dinner while some like some precious alone time. Indeed, never under-estimate the gift of a quiet, solitary Sunday afternoon.

Still, while every mom is different, many share strikingly similar qualities — you know, like the propensity for licking their fingers and wiping dirt off your face even though you’re in your 50s. In fact, you could argue that most mothers fall into at least one of seven categories on our Zoomer Mother’s Day TV Mom Scale.

Lucy Ricardo from I Love Lucy

Ricky Ricardo: Did [Little] Ricky give you a tough day?

Lucy Ricardo: No, just the same as any other day: after breakfast, I put on his snow suit. I pull on his galoshes. I slip on his mittens. I walk him to the park. He chases the pigeons. I chase after him. He runs after the squirrels. I run after him. He gets on the swing. I push the swing. We go on the teeter-totter. He teeters, I totter. Then we leave the park and we walk home. I pull off his galoshes. I pull off his mittens. I pull off his snow suit. I tell him to go into his room and play with his teddy bear. And that is why you find me sitting here with my coat and my boots on.

You’re a trailblazer who won’t take no for an answer and still never fails to put a smile on your loved ones’ faces. When you think about it, it’s pretty amazing that Lucy and Ricky Ricardo became parents at all. To start, they weren’t allowed to say the word “pregnant” on television. Then there was that whole “sleeping in separate beds” situation. Nevertheless, as Lucy was prone to do, she found a way to defy the odds and get what she wanted. In this case, it was a son: Little Ricky. While other TV moms made raising children look like a breeze (see June Cleaver), motherhood, didn’t stop Lucy from getting into a hilarious jam every episode. Not only was she among the first television moms, but she was most certainly the funniest. And given the fact that the episode where she gave birth became the most viewed TV show in history — beating the presidential inauguration that took place a day later — it’s easy to see why Lucy Ricardo belongs at the top of anyone’s list of TV moms.

Leave It to Beaver by zoomermedia

June Cleaver from Leave It to Beaver

June: Dear, do you think all parents have this much trouble?

Ward: No, just parents with children.

You’re just about perfect. It’s almost unfair to include June on our list because she and husband Ward have become archetypes of unattainable parental figures. Nevertheless, June Cleaver remains a television icon and likely one of the first — if not the first — name you thought of when you saw this list. She may have come from a (seemingly) simpler time, and her life may be just a tad unrealistic, but we have to give her credit for being a loving, caring mom. Just one question: what’s with allowing your kid to walk around being called “the Beaver”?

Louise: Lionel, you’d better go to your room. I don’t want you to get hit by your father.

Lionel: Why would Dad hit me?

Louise: Because I’m not sure just where I’m going to throw him!

You’re able to roll with the punches and throw a few of your own. Being tough was a means of survival for Louise. Her family had little money when she was growing up, she lived next door to Archie Bunker for a time and she had to contend with her hard-headed husband and his equally dense relatives. Louise was a loving, nurturing mother, but when put in a similar situation as Edith Bunker she was more than willing and able to stand up for herself. On any given day she proved equally happy to bake her son a tray of cookies or whack her husband over the head with it.

Edith Bunker from All in the Family/Archie Bunker’s Place

Gloria: Well, that’s awful, even if he didn’t like your cooking.

Michael: Then why’d he call you “dingbat”?

Edith: Well, in them days, Archie was too shy to call me “sweetheart” or “darling,” so he called me “his little dingbat.” And you know what, ever since then, no matter how mad he says “dingbat,” I always hear a little “sweetheart” in it.

You are loving and accepting to a fault. After all, you’d have to be huge-hearted mom to put up with Archie Bunker for all those years, let alone marry him. Nevertheless, Edith was the type of mom who was always willing to lend a hand and consistently put others’ needs before her own. Children should be eternally grateful if their mom takes after Edith — and even more so if their father doesn’t take after Archie.

Susan: I just want you to know that I love your son very much.

Estelle: Really? May I ask why?

You know everything. Or, at least, you think you do. Estelle gleefully advised her son, George, on anything from religion to clothing to employment, whether he asked for her opinion or not. Estelle Harris, the actress who portrayed Mrs. Costanza, described the character to Zoomer as a woman who “lived in the same awful apartment with the same awful furniture for all those years. She was not mad about her husband and she had one son, who was a loser.” Still, despite her know-it-all attitude, she only acted as she did out of love for her son. Deep down, she was like any other mother — minus the easily-triggered temper, of course.

Vivian Banks from The Fresh Prince of Bel Air

Kayla Samuels: You don’t get it. I have four older sisters, all of them were mamas before they were eighteen, none of them finished high school. Everyone’s waiting for Kayla. I’m the last chance for this family and you have no idea how that feels.

Vivian Banks: Oh, I know how that feels and I know what it’s like to clean hotels in the morning and go to school at night just to get a diploma I never got.

Your passion for success at work burns as strongly as your passion for your family. Working moms like Vivian Banks know what it’s like to put in long hours and make sacrifices for their careers. Not only did Vivian go from high school drop out to a PhD touting professor, but she raised a family of four children as well as her nephew, Will, who came to live with the Banks’ when a couple of guys who were up to no good started making trouble in his neighbourhood. She followed her dreams and carved her own path when she could have easily just rested on her rich husband’s laurels. Moms like Vivian instil a solid work ethic and sense of pride of individuality in their children while also offering the parental love they crave. And, in perhaps her most memorable moment, Vivian proved she can do anything she puts her mind to when she nailed a dance audition, seen in the video above.

Marge Simpson from The Simpsons

Marge: How come they never call me fun mom?

Homer: A family’s like a team. On every team, you have the slam-dunking mega star and the referee.

You’re married to a buffoon and gave birth to a child that makes Dennis the Menace look like a choir boy and still find reasons not to run away. Understanding moms like Marge see beyond the inevitable dysfunctions every family experiences and love their partner and children unconditionally — even when they’re inclined to hop up from the dinner table and growl like wild dogs over the last pork chop.