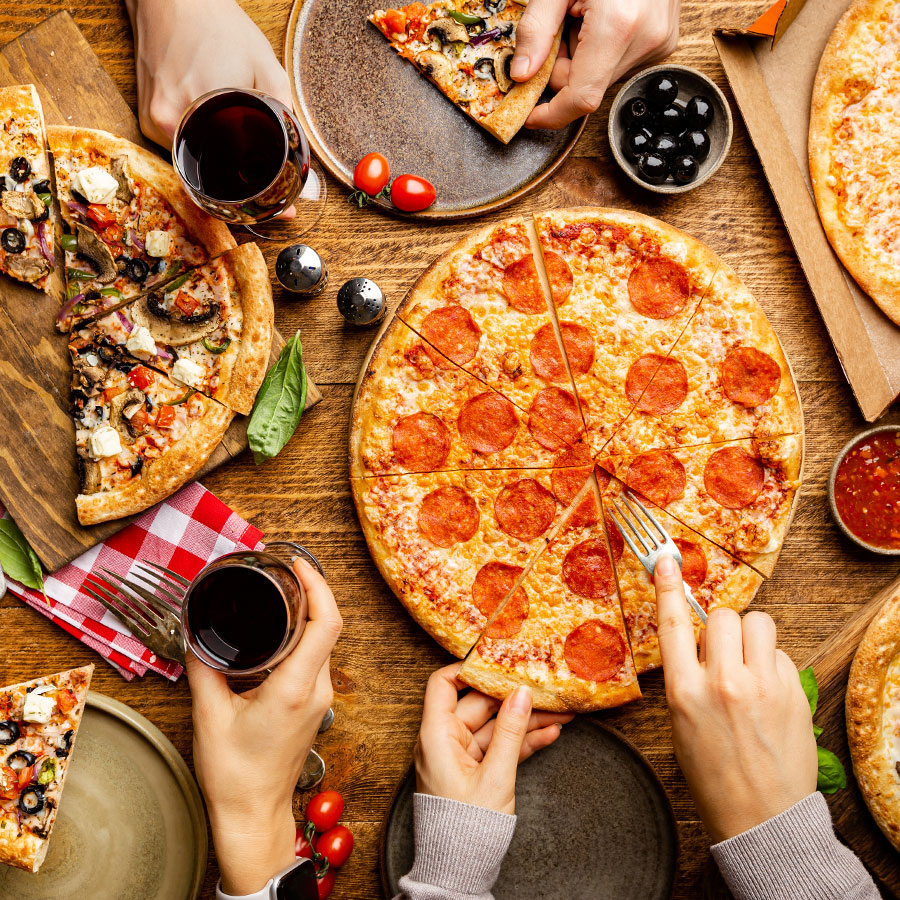 Pizza and a perfectly paired wine to accompany an acclaimed new Canadian film is just one of our expert's suggestions for crafting a cozy, entertaining and well-fed weekend movie binge. Photo: Roxiller/Getty Images

There has never been a better time to be a “couch potato.” The once-pejorative designation now instead may point to someone with their finger on the pop-culture pulse, as multiple streaming services compete for eyeballs with an often-dazzling mix of original and acquired content across all genres. Really, the amount of viewable stuff on offer is staggering.  And there’s always free-to-borrow DVDs at the local library with some also offering free streaming services. Plus, there’s video on demand.

Of course, one’s viewing selection is only part of an excellent night in, with food and drink combining to create the ultimate triumvirate. And since themes are fun, we humbly submit three: a buzzy recent film paired with something bubbly; a standout Canadian film paired with Canadian wine; and a classic film paired with a classic winery or varietal. In all three categories, we offer snack suggestions and high and low–end price points for wine because, sadly, they can’t all be $100 bottles.

Film: The Lost Daughter.  Actor Maggie Gyllenhaal’s feature directorial debut, based on her adaptation of Elena Ferrante’s 2006 novel about a woman on holiday suddenly forced to recall and confront thorny issues about motherhood, failed to land any of the three Oscars it was recently nominated for. But it sparked many, many conversations about the responsibilities foisted on women simply because of their biology, as well as society’s rigid conservatism when confronted with maternal behaviour that deviates from the norm.

Indulgent and/or Wallet-Friendly: This being post-Oscars week, let’s veer from bubbly but remain with white and suggest Riesling. Many people have negative ideas about Riesling, expecting the wine to always be obscenely sweet. True, Riesling is typically sweeter than whites like Chardonnay, Pinot Gris or Sauvignon Blanc, but it’s also divinely aromatic, with citrus and apple notes that beautifully complement fiery Indian dishes, which can overwhelm subtler varietals.

It’s also refreshing, which makes it a good companion for a film shot on the beaches of Greece. Many countries produce high-quality Rieslings, namely Germany — where it’s basically the national grape — France and Canada. Rieslings from the Alsace region can command big bucks, whereas Rieslings from South Australia are typically less expensive and showcase lovely minerality on the palate. Those determined to keep with the bubbly theme can opt for sparkling or effervescent Riesling. Thirty Bench makes a winner in this latter category.

Snack Options: Curry takeaway or anything Indian that suits your fancy.

Film: Beans. Writer-director Tracey Deer’s fact-based drama about the Oka crisis of 1990 — which found a small Quebec community’s Indigenous population challenging an incoming golf course and facing off against the Canadian government and the military in the process — puts this dark chapter of Canadian history into perspective from the POV of its title character, a whip-smart Mohawk girl coming of age in anxious times. It’s also wonderful, and it’s not just me who thinks so. Among the film’s many achievements, Beans recently won the Toronto Film Critics Association’s 2021 Rogers Best Canadian Film Award. It also won Best Picture at the 2021 Canadian Screen Awards and was second runner-up for the People’s Choice Award at the Toronto International Film Festival behind Kenneth Branagh’s Belfast.

Indulgent and/or Wallet-Friendly: Baco Noir. Like ice wine, this slightly sweet, slightly smoky red is distinctly (if not exclusively) Canadian, a hybrid of the French wine grape Folle Blanche and something rather ambiguous but native to, and abundantly found throughout Ontario, Nova Scotia, and a handful of U.S. states. Several things are unique about Baco Noir. Its inky purple colour belies its soft tannic punch while making it look dramatic in the glass. It’s best drunk young. It doesn’t need to breathe before drinking, and its relative sweetness — averaging about eight to 10-plus grams of residual sugar per litre — make it an unusually good match with anything grilled and with tomato-based recipes. Most Bacos, which are widely produced by Ontario wineries, are quite affordable; even a top-flight Wayne Gretzky Estate Series 2020 vintage rings in at just $30 (and with 8.1 g/l). Henry of Pelham Baco Noir is a favourite, and the just released 2020 Trius Distinction Baco Noir is comparatively dry with just 7.3 g/l.

Snack Options: Pizza. No matter the toppings, Baco Noir will complement them. I promise.

Film: The Big Chill. Director Lawrence Kasdan’s ensemble dramedy captured the zeitgeist of 1983 when it was released, and it holds up remarkable well almost 40 years later, no doubt because it corralled some of the very best actors of its era: Jeff Goldblum, William Hurt, Glenn Close, Kevin Kline, Meg Tilly, Mary Kay Place, Tom Berenger and JoBeth Williams. Hurt, who died on March 13, a week shy of his 72nd birthday, was one of Hollywood’s biggest stars of the ’80s, albeit not without controversy. His work here is a reminder why.

Indulgent and/or Wallet-Friendly: Retro, baby! Grab a bottle of something that was popular in the ’80s and is still available, more or less in the same form, today. We’re talking Blue Nun or Black Tower Riesling from Germany (that’s probably where your perception of tooth-achingly sweet Rieslings came from), Mateus Rose from Portugal, California Chardonnay from old-school wineries like Mondavi or Beringer or … wait for it … White Zinfandel, specifically from Gallo Family Vineyards. Legwarmers and shoulder pads optional.

Snack Options: Sticking with the retro-’80s theme, Sloppy Joes, spinach dip served in a bowl made out of bread or Hamburger Helper (try with plant-based ground round from Yves Veggie Cuisine, Beyond Meat or B.C.’s own Very Good Butchers to drive down the saturated fat quotient) would complete the throwback vibe.

The Best Wine, Eats and Stays on a Napa Valley Tour