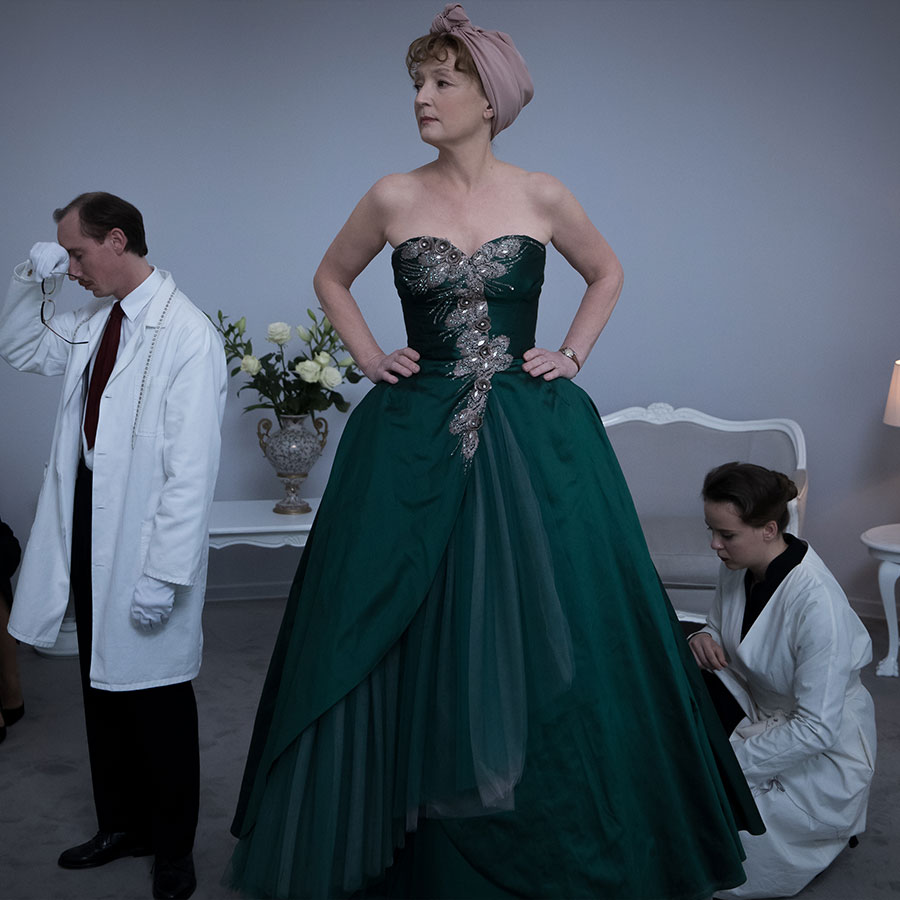 Lesley Manville, 66, stars in 'Mrs. Harris Goes to Paris,' about a London cleaner on a quest in Paris to purchase the Christian Dior dress of her dreams. Photo: Dávid Lukács /Ada Films Ltd - Harris Squared Kft

In romance novel circles, plots built around mature female characters with heroines past their childbearing years are called “seasoned romances.” What should we call movies featuring women of a similar demographic, then? Seasoned adventures, perhaps?

We’re going to need a catchy moniker, because Everything Everywhere All at Once and Good Luck to You, Leo Grande are two of the best new non-franchise films in a long time to revolve around older women and their self-discovery outside of marriage and children. Hopefully they’re only the beginning of an emerging wave of film (and TV and literature) interested in laying bare the challenging, glorious and sometimes madcap adventures embarked on in mature age.

Certainly, in recent years, Helen Mirren, 76, has been leading the charge against depictions of fading grande dames (à la Sunset Boulevard and What Ever Happened to Baby Jane?) or crones retiring to their dignified dotage (think: The Whales of August). Mirren’s turn as a wily retired spy in the Red action movies and, more recently, as the Shaw matriarch in the Fast & Furious franchise alone (where she finally got to drive!, which she says was the main appeal when she asked for a role) have stepped things forward. One could even suggest it was building from her 2003 hit Calendar Girls, when Mirren led a group of spirited Yorkshire women out of their comfort zone to bare all for a fundraiser.

Research from 2019 found that older women are often relegated to supporting roles in films — or are consistently portrayed as grumpy, frumpy or senile. There have, of course, been outliers — like Grandma, a 2015 comedy in which Lily Tomlin (then 76) stars as feisty, rascally Elle spending a frantic day trying to raise money to pay for an abortion for her granddaughter Sage (Julia Garner) that lands differently now that the Supreme Court of the United States has overturned Roe v. Wade. I’ve also grown fond of Grace Quigley, the inexplicable 1985 Katharine Hepburn and Nick Nolte buddy-comedy caper about euthanasia (yes, really — it’s streaming on Hoopla: a silver-screen icon, then 78, careening around New York City on a motorcycle with Nolte’s hit man is not an image easily forgotten). More recently, Linda Hamilton reprising her groundbreaking role as Sara Connor in Terminator: Dark Fate and Jamie Lee Curtis starring in the latest Halloween instalments — both women being in their early 60s — come to mind, while our breath is held for the upcoming historical epic Woman King, with Viola Davis, 56, as a fierce warrior-general (out this fall).

But as a rule in Hollywood and beyond, big-screen roles with true and positive depictions for women over 50 are the exception rather than the rule. That makes the small but meaningful new crop of movies about adventurous women in that age demo a refreshing change of pace — especially because industry players on both sides of the camera have been clamouring for them.

Just this past May, an open letter signed by more than a hundred actors and public figures from the Acting Your Age Campaign urged the entertainment industry to consider equal representation “to ensure that our generation of excluded women is the last generation of excluded women.” Emma Thompson (63), Brenda Blethyn (76), Keeley Hawes (46), Juliet Stevenson (65) and Lesley Manville (66) were among the signatories. “Ageism targeting women is an entrenched industry staple that is outdated, harmful and neglects the millions of audience members who appreciate seeing women over 45 telling the stories of our lives,” their letter contends. “A woman’s talent isn’t dependent on a calendar and it certainly isn’t the case for men. The parts offered too, to older women, are too often so narrow and stereotypically negative as to be stigmatizing in and of themselves.”

To that end, here, four new films look to combat that unfortunate trend.

Oscar-nominated for her indelible supporting role in the 2017 film Phantom Thread, Manville, at 66, stars in Mrs. Harris Goes to Paris (in theatres July 15) based on Paul Gallico’s 1958 bestseller about a London cleaner on a quest to purchase the Christian Dior dress of her dreams. It’s fitting that a Mrs. Harris remake comes on the heels of Emily in Paris, because the fun of going abroad to shake up one’s life (and this being England in the 1950s, shake up one’s social class as well) is itself a thrill. “Haven’t you ever wanted something so bad you could cry just thinking about it, laying awake nights dreaming of it?” is how Ada Harris puts it in the novel. Manville dressed the part at a preview in East Hampton earlier this month and the process of wardrobe recreation for the movie, based on Dior’s actual work, is thrillingly chronicled by Oscar-winning costume designer Jenny Beavan on her Instagram.

The idea of the Dior dress grips Mrs. Harris as an obsession, and she scrimps and saves (and has a bit of luck, rewarding her honest nature) to finally make the journey from her humble basement flat in Battersea to the City of Light. The new movie spends as much time fleshing out her London and makes setting up the quest all the more affecting, allowing the audience to vicariously enjoy her delight once she gets there. It involves a week of fittings for a haute couture gown but also a genuine curiosity about people, taking a chance to open herself up to love again, and taking in the sights on a moped with lovelorn Dior accountant André (for her adventure also includes matchmaking), played by Emily in Paris actor Lucas Bravo.

A 1992 TV movie adaptation starring Angela Lansbury, Omar Sharif and Diana Rigg — and directed by Lansbury’s son Anthony Pullen Shaw — played down the adventurous and determined qualities of Harris’s character and story and instead played cute, almost infantilizing her good humour as naiveté. Manville’s portrayal of a curious woman gamely up for adventure but limited by circumstance is, by contrast, much more affecting.

Good Luck to You, Leo Grande

In Good Luck to You, Leo Grande (now on Prime Video) another signatory of that open letter, Emma Thompson, 63, plays Nancy, a widowed schoolteacher in her early 60s who’s never had an orgasm. The buzzy chamber-piece movie chronicles a series of sessions and sexual experiences she hired a sex worker to help her enjoy. “I’ve never done anything interesting in my life,” she tells the 28-year-old sex worker of the title. “You’re the only adventure I’ve ever had.”

The premise deals with subjects such as sex work, intimacy and older women’s sexuality in ways not often depicted onscreen, as Zoomer recently covered in depth — because unfortunately and even today for most women the naming and articulating of desire is adventurous. Sometimes the role itself pushes at the boundaries of their own comfort, as Thompson has discussed in reference to her Leo Grande nude scene. In fact, director Sophie Hyde, 45, joined the two stars in nude rehearsals during which, as Thompson told Cinema Café, they “talked about our bodies, talked about our relationship with our bodies, drew them, discussed the things that we find difficult about, things we like about them, described one another’s bodies.”

Everything Everywhere All at Once

Meanwhile, two mature actresses — Michelle Yeoh, 59, and Jamie Lee Curtis, 63 — kick but in the lead roles of Everything Everywhere All at Once, an ingenious multiverse action fable that captures how much hurt and regret one must repress in order to live. Released in April and simultaneously weird and heartwarming, the film, about a Chinese American immigrant (and her angst-ridden queer child) bristling against the rut of her life running a laundromat, also happens to be a great, smart action movie. It’s been a coup not only for Asian representation but also for older Asian women. “Why is it that we older women cannot be the superhero?” superstar Yeoh asked (now rhetorically).

Discussion of Everything Everywhere’s themes and cast dominated social media for weeks around its early spring release, but if you need proof of an audience appetite for inventive fare that centres women of experience, look to the bottom line: last month the arthouse flick also became its studio’s most successful movie worldwide — overtaking both Ari Aster’s horror hit Hereditary and millennial darling Greta Gerwig’s Lady Bird by grossing more than US$80 million (to date).

And while we wait for Diane Keaton, Jane Fonda and the other members of the 2018 hit movie Book Club to release their next chapter — a girls’ trip sequel currently filming in Italy — Keaton, 76, both produces and stars in Mack and Rita (in theatres Aug. 12). It’s a charming twist on the Freaky Friday body swap plot and riffs on the adage, “If only I had known then what I know now.” At 30, Mack (Elizabeth Lail) is an old soul and after a regression therapy session, emerges with a body to match (Keaton) while on a bachelorette weekend in Palm Springs. Much of the movie the inimitably quirky Keaton doing her thing (stammering, gesticulating wildly, wearing circle skirts, belts, hats and gloves often all at once). But within that the movie tackles the issue of female invisibility and of being comfortable in one’s skin (whatever its collagen age). As fellow “wine club” members Lois Smith, Amy Hill, Wendy Malick and Loretta Devine look on, Keaton exemplifies the freedom that comes with age: an adventurous DGAF attitude when it comes to putting ice cubes in her red wine, becoming an ‘instagramma’ influencer sensation and flirting with her handsome 30-year-old neighbour Jack (Dustin Milligan).

‘Good Luck to You, Leo Grande’ Starring Emma Thompson, 63, Offers a Moving Exploration of Intimacy for Women in Middle Age and Beyond