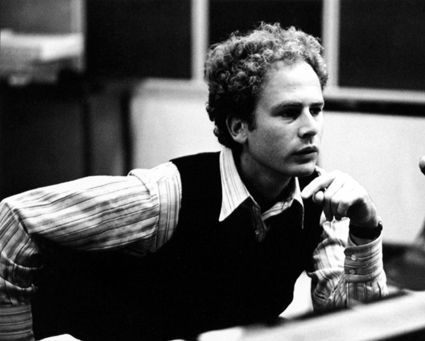 As a teenager, during the earliest incarnation of Simon and Garfunkel, he went by the stage name Tom Graph. Fans know him as Art and his friends and colleagues refer to him affectionately as “Arty.” Perhaps, though, there is no more apropos nickname for Arthur Ira Garfunkel than “The Singer.”

For more than 50 years, the legendary folk artist has taken the words and tunes of some of music’s greatest songwriters – most famously, of course, Paul Simon – and injected his trademark spine-tingling tenor, evoking an aura that’s at once both contemporary and timeless. Like a travelling minstrel of another age performing ballads for commoners and royals alike, Garfunkel’s illustrious status within the American music lexicon may occasionally be underestimated, though never undeserved.

With today’s release of The Singer, a two-disc collection of Garfunkel’s work handpicked by the artist himself, fans are treated to a selection of the songs that the man behind the voice believes showcase the best work his pipes ever produced.

“Never mind anybody else’s opinion, I know with my ears the best of any human being where the singing really happened in my throat – what were those great nights, who were the great musicians who gave me the greatest groove?” Garfunkel said from his hotel room in Greece. “Let me be the one who selfishly plays record producer and skims off the best of what I did as a singer – with and without Paul – over the five decades.”

It’s hard to argue with Garfunkel’s choices. From solo tunes like “Perfect Moment,” which he wrote himself, “I Only Have Eyes for You” and “All I Know” to classic Simon and Garfunkel offerings “Kathy’s Song,” “My Little Town” and “Bridge Over Troubled Water,” the selection provides a fantastic range of Garfunkel’s vocal talents.

“I wanted to focus on the singer as an instrument,” Garfunkel said, “as if I’m proud to be a virtuoso singer who can put out beautiful tones and be tender and be strong and connect to different lyrics.”

Of course, Garfunkel gives his friends and fellow artists their due on the collection as well. James Taylor and Paul Simon join in on multiple tracks, including all three performing “(What a) Wonderful World,” Graham Nash and David Crosby on “Breakaway” and collaborators Jimmy Webb, Maia Sharp, Leah Kunkel, Nicky Hopkins, and Michael Brecker, among others, in numerous other songs.

The collection is rounded out by covers, some of which include songs by the Beach Boys (“Disney Girls”), Carol King and Howie Greenfield (“Crying in the Rain”), and the James Dean and Natalie Wood classic “Two Sleepy People” from Rebel Without a Cause. As well, two new, previously unreleased tracks are included – “Long Way Home” and “Lena” – and liner notes written by Garfunkel himself accompany each song in the boxed set.

For fans, The Singer is a personal treasure trove of Garfunkel at his artistic best. But what of the next generation looking to discover the soul of “the voice” behind Simon and Garfunkel?

“I hope that they get the idea that the vocal is an instrument,” Garfunkel said.  “Just like Mark Knopfler is a great guitar player, I think Arty is a good singer and I want to show my various ways of being a good singer from tune to tune. But you have to listen and feel the sequence. That’s what I hope they get.”

The Singer is available everywhere music is sold. Click here for more information and a complete track listing.