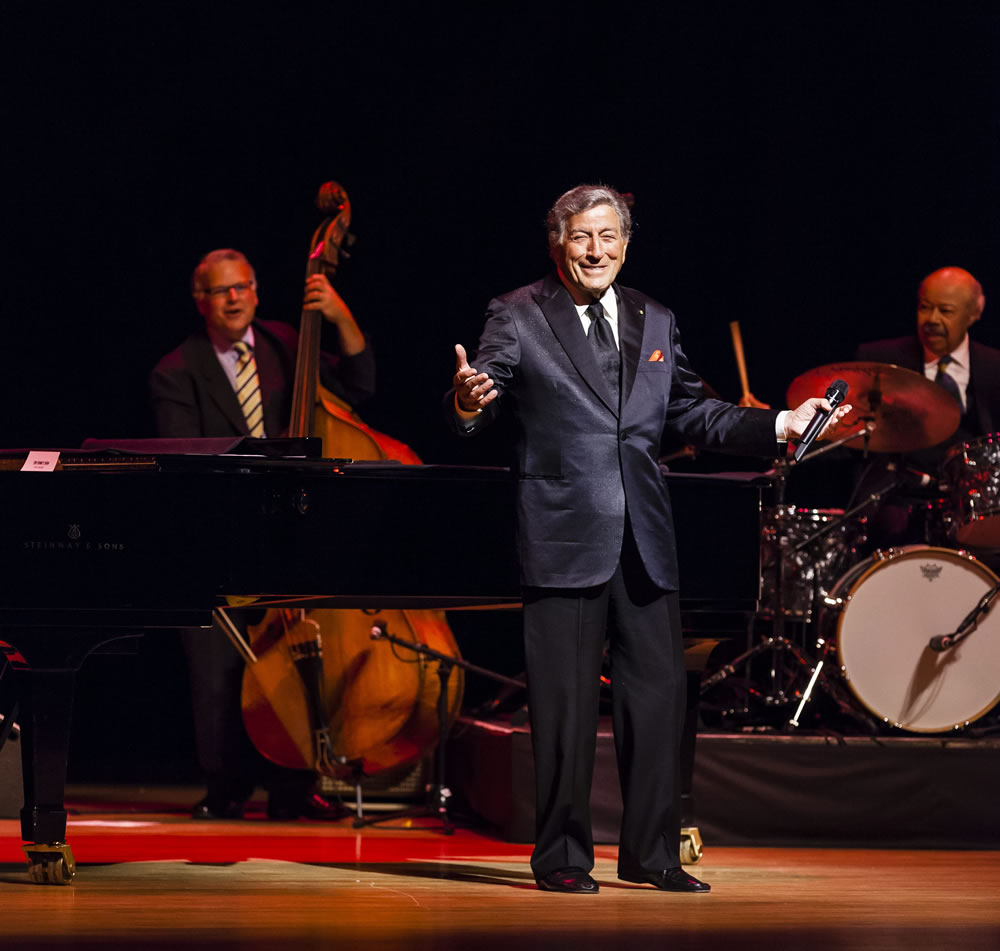 With the release of A Swingin’ Christmas, Tony Bennett proves he’s still got that swing. Hilary Kelley left her own heart with the crooner in Toronto

If music be the food of love, play on

Hilary Kelley: I have a mini six-degrees of separation with you: I travel to New York City frequently, and I always have the same driver. He told me that you were his client, too. He and I would have these conversations from LaGuardia into Manhattan. He told me: “You and Tony are my favourite customers because you two are real.” I think that you have transcended the generations, and you give us all such joy.

Tony Bennett: I love to do it. I could have retired 13 years ago. But I really like making people feel good. It really makes me feel good. And I have no idea of retiring.

HK: Some people can’t wait, but if you love what you do, there’s no such thing.

TB: The majority can’t wait. I have this saying, “I’ve never worked a day in my life” because I would sing and paint and I love doing both. And it’s always interesting. Never a bore, not tedious, not “Why am I doing this?” I don’t get into any of that negativity. The only request I have is that I want to learn more and more. That’s the drive I have, you know, and I just love it because it keeps me alive, actually, and I really work hard at staying well so I’m able to do it rather than have something that would detain me from doing it.

HK: You have such an extraordinary schedule. How do you fit in the painting?

TB: I paint everyday, but the secret is learning how to draw properly. I’m always drawing, always painting. I bring my watercolours with me when I travel. And at home, I paint with oil when I have time off. The beauty of travelling is that I go to every museum in the world and check out every museum. Six days ago, I was in Ottawa at a big cultural gala, which was wonderful with a big symphony and, near there, there is the [National Gallery of Canada]. You see the [Group of] Seven painters of Canada; and Canaletto is in there with all his great paintings. And you walk away with so many ideas, so many things you want to do.

HK: You’re the master of reinvention. You’ve never stopped. Not everyone knows that you studied art early on and then came back to it later.

TB: I went to art school. Now, I’ve got a painting entitled “Central Park” in the perm-
anent collection in the Smithsonian American Art Museum. And I did a portrait of Duke Ellington that I love.

HK: When you walk away from having an experience with a great work of art, there’s not much space for anything but joy.

TB: Absolutely right. My wife and I are starting Exploring the Arts, this concept of going to every public school in the U.S. and creating art programs in every one of them. We have more artists than any other country in the world. We have one school in NYC — my master was Frank Sinatra. He was 10 years older than I was, and he was my best friend and, because you can only name a public school in the U.S. after someone who is deceased, we call it the Frank Sinatra School of the Arts. And it’s very, very popular and successful.

HK: Does your daughter, Antonia, perform on A Swingin’ Christmas?

TB: She’s on this new CD. The whole album is swing. I figured at Christmastime, you know, rather than going the religious route and all that … there’s parties all over the place, and it’s the kind of album that if you put on at a Christmas party, it just has a beat going. It’s upbeat. There’s always something good happening … all good tempos that make people tap their feet and feel good.

HK: I think swing, like a lot of the music in the jazz realm, never goes out of style. And on this album, you’re working with the Count Basie Big Band.

TB: Swing’s a thing that was invented in America. Louis Armstrong is the biggest influence. Sinatra had a swing. Billie Holiday had swing. Everybody who sings the music of that era in the ’20s, ’30s and ’40s is all about swinging.

HK: The ’30s and ’40s were certainly a difficult time, and we’re in one again. I have to admit that I’m completely addicted to CNN. We’re so involved and filled with all of the intimate information, not only about the election but also what’s going on in these economically tough times.

TB: Television is really the greatest invention for propaganda. It’s all stilted. Really conservative. So if you’re liberal, you’re treated like a communist. They frighten everybody. And, when you throw fear into everybody, that’s the end of democracy. It’s very dangerous. Mussolini did that, created fear and that was the end of that society. You gotta watch it today because you can see where they’re going on television and you just say, wait a minute, this has nothing to do with the real people.

TB: Very nice. I did a painting from the window of the Falls, and it came out nice.

HK: I notice that you do a lot of cityscapes that are really fantastic. TB: It’s coming, you know …

HK: Is there somebody contemporary who you listen to?

TB: I like Michael Bublé. He’s a great performer. And I like Diana Krall. Wynton Marsalis has done a lot of good stuff, creating jazz concerts. There are a lot of good things out there. I’m doing an album next year with Stevie Wonder, and Quincy Jones is going to be the producer.

HK: You’ve had the opportunity to sing with so many of the greats — from Frank and all the guys up to Bono and our own k.d. lang — I loved the duet with her.

TB: We’re doing a benefit for a friend of mine who, at one time, was the richest man in America. He’s 95 next year, and he’s commissioned myself and k.d. lang. I just love her. Everything about her. We played in Australia for a whole month. She was phenomenal, so honest. Very genuine. My favourite story with her: I have a great friend who is one of the world’s most famous watercolourists, Robert Wade, from Melbourne, Australia. He invited us to his home, and he could never get over that, at the end of the meal, she turned to his wife and she said, “Would you like me to help you clean up in the kitchen?” And he never got over that. She is this big star and she’s so real.

In stores now, Tony Bennett’s A Swingin’ Christmas Featuring the Count Basie Big Band (Sony BMG) is only the legend’s second holiday album among his more than 100 album releases to date.