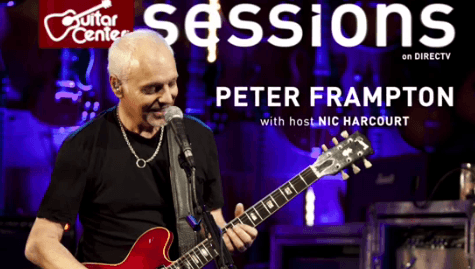 When Peter Frampton took the stage in San Rafael, Calif., in June of 1975, the 25-year-old singer with the slim build and long flowing locks had no idea that he was about to launch his career into the stratosphere. Songs from that performance, and subsequent shows in San Francisco and New York State – his first sets as a headliner – were weaved together on one record and christened Frampton Comes Alive! (FCA!). Within a year, the former Humble Pie band member went from recognizable solo act to superstar. FCA! – which spent nearly 100 weeks on the Billboard Music charts (10 of those weeks at number one) – became, at the time, the bestselling live album in the history of American music.

In 2011, Frampton embarked on the FCA! 35 tour, where he recreated the legendary live album 35 years later. The show is documented on FCA! 35: An Evening with Peter Frampton, a new three-CD and multi DVD/Blu-ray offering. The 60-year-old Frampton sat down with Zoomer’s Mike Crisolago to discuss fame, his disdain for music reality shows, the aftermath of FCA!, and what he really thinks of that album and how it came to define his career.

Frampton Comes Alive!, the fallout and what he really thinks of his iconic album

MIKE CRISOLAGO: On the new DVD, you note that you simply happened to capture a great night(s) on the original FCA! album. And yet, more than 30 years later, we’re still celebrating that performance.

PETER FRAMPTON: I’ve come to terms with the fact that it is what it is and that I have no idea why. There’s something about that night, that band, that material and just that period of time. Everything was ripe – we weren’t tired of the material, we were energized by it.

But it is surreal sitting here, nearly 37 years later, and new fans have just started listening to it. That is something that I’m humbled by because [of] the it factor that everybody in every generation will pick it up and like it and they’ll find that same thing that the people in ’76 found. But you can’t put your finger on it.

MC: It’s interesting, though, because you go on to say that the FCA! album was your defining career moment, whether you “like it or not.” I’m curious whether you, in fact, do like it, or not?

PF: [Laughs] I love it, now. [Pauses] Well, “love” is a strong word. [Laughs] I think I’ve come to terms with the fact that, if I’d have had my druthers, I wouldn’t have gone through the aftermath the way I did because I was totally deer in the headlights, confused, for the 1980s. [Laughs] And I’m not complaining, but you don’t realize how insane it is until you get to that point where you are that guy on the moon. But when I broke the biggest selling [live] record of all time tapestry, that’s insane. How did I do that? Why did that happen to me? It’s all downhill from here. You know what I mean?

And you ask people who are huge artists “What happens next?” and they go,  “I don’t have a clue. It’s your career.” So you’ve got no one to ask, and then all these business people come up and say, “I think you ought to do this and this and this.” And they haven’t got a clue, either. So, it’s been a long learning curve and I’m just better off for it.

MC: As someone who played and toured with a number of bands at a young age before hitting it big, what’s your take on reality music shows where acts are either formed by the producers or simply put on stage to be judged?

PF: I can’t stand any of it. To me, it’s like a talent show – and [they’re] partially there to be laughed at, to be picked apart. I think it belittles the artistry – I [don’t] want to see somebody crying because they can’t get a melody right. I don’t wish to be judged and I don’t wish to judge anybody. I know what it takes, when you have talent, to make it. And this, to me, isn’t an easy way of getting to the top. And if I’m wrong, I think that that sort of success is hollow in a way.

MC: Imagine if you did one of these shows and had a bad showing when you were with The Herd or Humble Pie. We may never have heard from you again.

PF: [Laughs] You know, everyone has a bad day. No one’s perfect. And you’re right, what if you do that non-perfect day when it’s the semi-finals, and you’re off and that record contract disappears? – Every one of those people is me. [Laughs] Slings and arrows! I mean, artists are sensitive. So, for the most sensitive people in the world to go put themselves out there to be shot down, it doesn’t make a whole lot of sense.

Songwriting, clarity and advice for the kids

MC: You’re still working on new material. How has your approach to songwriting and performing evolved since the days of FCA!?

PF: It’s more like it was in the late ’60s to mid-’70s now. After FCA!’s original success, I’ve been through all the periods of wondering what should be next, as opposed to writing what comes next and not worrying. So I’ve just gone back the last 10 years – Nov. 5 was my 10th new birthday, I’m sober 10 years – and I think that’s had a lot to do with clarity. [Laughs] And I am more prolific now, I think, in writing, than I have ever been in my life. I trust myself – my own decisions. And you know what? That’s created more things that people like than when I was trying to worry about what they might like.

MC: Hypothetically, if tomorrow’s hottest new act came to you for advice what would you offer?

PF: It’s difficult in one way because it’s a completely different business. Back then, I believe that the follow-up album to FCA! could have been three, four years later. It’s such a quick turnaround now. But what I would say to new artists who find themselves in that no man’s territory, you know – the final frontier, where no act has gone before – is just stick to your guns … What do you want to do next? You’re only as big as your last record and until you bring the next one out, it’s still the huge album. So you’re taking a big chance the next time you release something because it’s going to be compared to this biggie over here.

MC: You’re still quite active, both health-wise and in your career. Any tips for taking care of yourself as you enter into your 60s and beyond?

PF: (While) working, I realized in my mid-50s, I started to slow down a little bit. So, what makes me vital is taking care of myself. [Being] sober, working out three to four times a week, that helps me mentally. And really thinking about portion sizes and what I put in my body because it makes a difference. And, hey, I want to be as active as possible for as long as possible. My work is my passion, my addiction. And it just keeps going, and that keeps me young. Well, not young, unfortunately. [Laughs] Keeps me feeling young.

MC: And even after 37 years, your passion and energy for performing is still very evident.

PF: We have our good, very good (nights), and nights [Laughs] when we are tired. So I think that’s what’s kept me going, is to do a better show than I’ve done [previous nights]. And find something new. I look up at my band and it makes me smile on stage because they’re just all so good. I think it’s all to do with personalities as well as musicianship.

Friends – some lost, some found

MC: How much of this anniversary celebration is homage to band mates Bob Mayo and John Siomos, who played on the original FCA! album and who have since passed away, and your friend George Harrison, whose song “While My Guitar Gently Weeps” you perform?

PF: The whole thing is a tribute to Bob and John. We had their pictures up, and they’re in the DVD. Every night I mentioned them – and George Harrison – that was one of my all-time favourite covers. I was doing a 9-11 benefit in January of the [year following George’s passing]. I called everybody and just said – let’s do a tribute. And it tore the place apart so I don’t think we’ve ever done a show without doing it again.

MC: Finally, on the DVD you’re re-united with your beloved Les Paul guitar that you lost in a plane crash in 1980. What was the first thing that came into your head when you opened the case and saw that it was indeed your guitar?

PF: Well, I knew when I picked it up [in the case]. I felt the weight of it, and that’s when I knew this really could be mine because it’s one of the very early Les Pauls – all mahogany, no maple on the top. And the early mahogany was incredibly light. I didn’t even have to look at it. I [thought], â€˜If this is a Les Paul in here, this could be mine.’ And then I unzipped it and – as soon as I put my hand around the neck, I went, “This is my guitar.” I knew it, straight away.

Peter Frampton’s CD and DVD/Blu-ray FCA! 35 Tour: An Evening with Peter Frampton, is available in stores and online.