Can’t Cage This Animal: An Interview with Eric Burdon 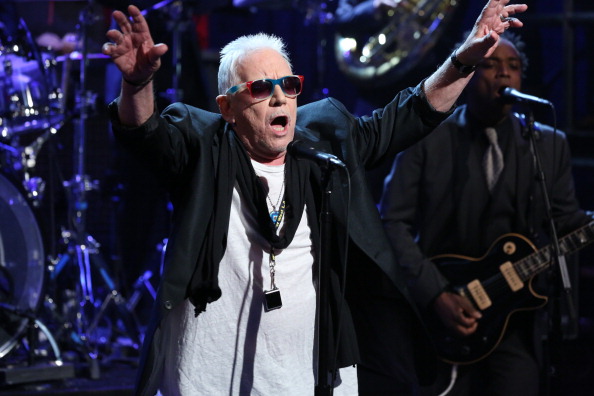 His white hair spiked and his glasses framed with rainbow-coloured rims, Animals front man Eric Burdon still looks every bit the rocker he was when he helped lead the “British Invasion” alongside bands like the Beatles, The Who and the Rolling Stones in the 1960s. Though the original version of The Animals broke up by 1968, Burdon’s distinctly aggressive, raw vocals on hits such as “House of the Rising Sun” and “Don’t Let Me Be Misunderstood” helped land the band in the Rock and Roll Hall of Fame.

Still writing and touring, Burdon, now 71 and living in southern California, pulls no punches when talking music, aging or his candid reactions to the untimely passing of friends like Jimi Hendrix, Jim Morrison and Janis Joplin. With a new album, ‘Til Your River Runs Dry, in stores, a show to play tonight at Casino Rama and a third autobiography in the works, Burdon recently sat down with Zoomer’s Mike Crisolago.

PART ONE: The Invasion, Drugs and the Death of Jimi Hendrix

MIKE CRISOLAGO: The British invasion proved one of the most monumental cultural shifts in modern music history. Was there competition between you and other bands like the Beatles or was everyone just happy to grab a piece of the pie?

ERIC BURDON: Well, when it started out, we were like brothers in arms. We were all friends and we’d get together and have a drink after a show. It was a real tight knit club of people. But then the big money started coming in, and the big agents and managers got their hands on the dough, and then there was a need for competition and so the camaraderie was lost by about ’67. I hated the expression British invasion. But we were young, we were from Britain and we were in America playing their music to them. That was a big thing to be able to pull off.

MC: On your new album, the song “27 Forever” evokes images of friends of yours like Jimi Hendrix, Jim Morrison and Janis Joplin, who all passed away at that age. Is it true that you played with Jimi Hendrix the night before he died?

EB: Well, 48 hours to be exact. It was really tough for Jimi to acknowledge people as friends because he was young, he’d just got out of the military, he was a stranger in a strange land [London]. He was dogged everywhere he went. Even if he tried to escape the world of drugs, he couldn’t. I tried to warn him and I think that’s what got me through my crush at 27. I was looking out for other people. Lord knows I was doing a lot of drugs at the same time, but you’ve got to believe in angels on your shoulder in that case. There’s somebody always looking out for you – well, for me, that’s been true.

MC: Jimi was also famously stopped at the Canadian border with drugs, including heroin.

EB: I believe, coming into Canada, he was set up – that somebody dropped a baggy in the back of his guitar case or whatever because Jimi had more sense that that. He was born and raised in Seattle –  right next to the Canadian border. He knows how tight it is at the Canadian border. It all smells to me. And at that point in time, he was getting really out of control as far as management went.

MC: Drugs were obviously prevalent on the scene at the time but, in your estimation, were there signs that something really bad was going to happen to Jimi?

EB: It was knee-jerk reaction when Hendrix died. I had a road manager who was thinking ahead of me, and he went to my apartment and found my 12-gauge shotgun and got rid of it because that’s where I was going. I was going to go get that gun and go after the guys that I felt were responsible – the people who were giving him the drugs and the people who were with him after the drug dealers were gone and he was under the influence. And, of course, I had no proof that they were responsible. It was a gut feeling. That’s why it’s great that my road manager was there to help me. Otherwise, I would have been in jail. His death stinks, I’ll tell you.

EB: I could see it coming. I knew (Hendrix) was in trouble but there wasn’t anything I could do about it and it was a shock. Jim Morrison – I could see he was in trouble and I knew it was coming, but it wasn’t a shock. Janis – man, it was pitiful the way she was towards the end. And it’s always down to a certain degree of anger that people around them weren’t there to help them. They were only too happy to keep feeding them. And we were targeted by dealers, especially when LSD was the thing. You had retired chemists who had the skills to make up different batches of acid … that was designed for certain artists. Pretty freaky stuff.

MC: How lucky do you feel that you survived that same drug-fuelled rock ‘n’ roll culture?

EB: I’m thinking, ‘What did I do right?’ that got me through that period. I’m glad I can’t do it anymore – that I’m happily married and settled down. Chasing tail is a lot of work. [Smiles] But the lack of me getting high and going on stage – it’s affected me in a way that I never thought it would. I’m more aggressive because I’m more aware of what I have to say, what I should be saying and how I’m going to say it. And, of course, that spills over into the recording process as well.

MC: What advice would you offer today’s generation of musicians when it comes to drugs?

EB: Get a real job. Read the law. [Chuckles] No, I wouldn’t think that I really could advise anybody because the one thing about junkies is they’re very focused. They’re only focused on their next hit so whatever you say it’s not going to make any difference.

PART TWO: A Life-Altering Accident, a New Album and What the Future Holds

MC: The recording process for ‘Til Your River Runs Dry took longer than any album you’ve done. Why?

EB: I said, when I started doing Q&As, I’m going to say ‘Yeah, I fell off my Harley at high speed on highway 10 with traffic buzzing around.’ [Laughs] No, one of the reasons was I had [a fall] and screwed up my back and had to have an operation. I was in real bad shape. I’m still a bit cagey about being onstage and especially in airports, where there’s lots of stairs. And no more motorcycles – my bike’s in the garage for good now. It signalled a lot of changes in my life. Maybe I had to make those changes anyway, with the aging process, and maybe it turned out to be a good signal for me to slow down. It was like a sucker punch from God.

MC: With the new album, you explore a wide array of themes, such as environmentalism and politics. As an artist, do you feel a duty to address such issues?

EB: You took the words right out of my mouth. I feel it’s my duty. I think that it’s the duty of every artist. When you look at the artwork of the great masters, like Dalli and Picasso, if you look for it, they’re making political statements. In fact, Pablo Picasso made the biggest political statement of any artist when he did the painting Guernica, which brought the light to the rest of the world that the German Air Force was bombing civilians in the town of Guernica. And those are the guys who I look to as heroes.

MC: You also sing about meeting with the President of the United States. If you did get an invite to the White House, what would you talk to him about?

EB: I wouldn’t talk to him. I’d just pass him a joint under the table. [Laughs] That song was written during the first Obama [administration)]. What I’m hoping is going to come out of [Obama’s presidency] is that [Michelle Obama)] is going into the books in the White House library, and she’s going to write a phenomenal book about the slaves who built the house. That’s one of the things that I’m hoping for. But there are a lot of crazy things about America. I mean, I love the craziness about the States, but then again there’s also some craziness that doesn’t quite work.

MC: When it comes to performing, how do you balance your new material and evolve as an artist when there are people who just want to hear “House of the Rising Sun” over and over?

EB: Yeah, people want me to stay where they first saw me and where they see me on television with the original Animals in archival stuff. That’s why I change bands a lot – so I can put new fire into the Animals catalogue. But the boredom element does creep in. That’s the worst thing in the world for an artist: to become bored. But my back catalogue – the anthem, hit songs – there’s enough of them to switch around on different tours. That way, it keeps it fresh.

MC: Back in the ’60s, you said that we have these great means for communication in television, radio and cinema but we don’t use them properly. Do you still feel that way?

EB: Well, television’s gone to the dogs. It’s the same pretty much everywhere. Okay, so the BBC produces some magnificent series. There’s a lot of good stuff as well. Look at Kathryn Bigelow, a female director doing guy stuff and showing a different side of the story without castrating the guys. So, hats off to her. The news media is the tragedy – especially printed media in America. But it’s not all bad.

MC: What goals do you have for your career?

EB: Well, the [third] book. The highest hope that I’d have for my writing is for it to make it to the cinema. Who knows? I’m making my own documentary at the moment. And after this album, I’m looking forward to getting into the studio with another album. I hope that it has the same magnitude. I hope so. The future looks good. Looks like there’s plenty to do for me.

Eric Burdon’s new album, ‘Til Your River Runs Dry, is available in stores and online. For info and tickets for his Casino Rama concert this evening, click here.