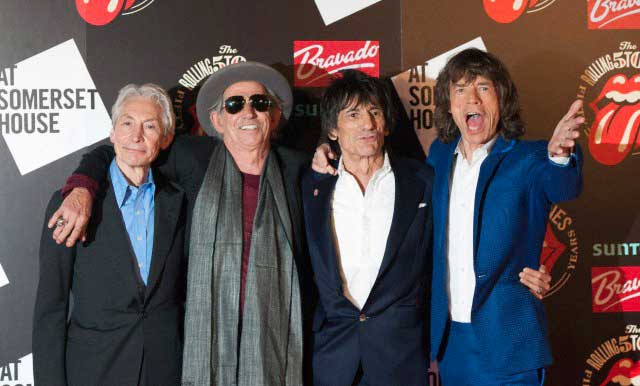 The Rolling Stones (L-R) Charlie Watts, Keith Richards, Ronnie Wood and Mick Jagger pose as they arrive for the opening of the exhibition Rolling Stones: 50 at Somerset House in London - Corbis

The Stones are coming! That’s right, the rock ‘n roll group will be rolling into Toronto to celebrate “Rolling Stones: 50 Years of Satisfaction”, an exhibit that opens today at the Rock and Roll Hall of Fame and Museum.

The exhibit will be interactive and honour band members Mick Jagger, 69, Keith Richards, 64, Ronnie Wood, 65, and Charlie Watts, 72, as well as past members. The exclusive exhibition will include 300 artifacts on display and chronicle the Stones’ journey from the very beginning.

Despite occasional rumours of the band’s pending retirement – with some critics even saying the Rolling Stones are past their prime and should retire – the band’s mentality is more  ‘rock till you drop’.  Guitarist Ronnie Wood recently told The Telegraph that the Stones will carry on performing until they can, literally, no longer stand up. “I think of Howlin’ Wolf plugging in to his kidney machine, however old he was, 80 or something, and still playing,” Wood said.

As part of their 50 & Counting Tour, the bad boys of rock will perform in Toronto at the Air Canada Centre this Saturday, May 25 and again on Thursday, June 6. (Go here for more information.)

The Rolling Stones, however, may have tamed their rock star personas a tad since their famous visit in 1977 when Keith Richards was busted for heroin. Though Richards still likes to get “pissed” from time to time, he told People magazine he has cleaned up his act.

“It’s dangerous when you start to attribute everything you do to what you’re hung up on, instead of realizing that even if you took a ton of acid you couldn’t write the greatest song if you weren’t capable of it in the first place.”

Watch some of our favourite clips of The Rolling Stones throughout the years.