Fallout from the G20 Conference and from its Security Efforts 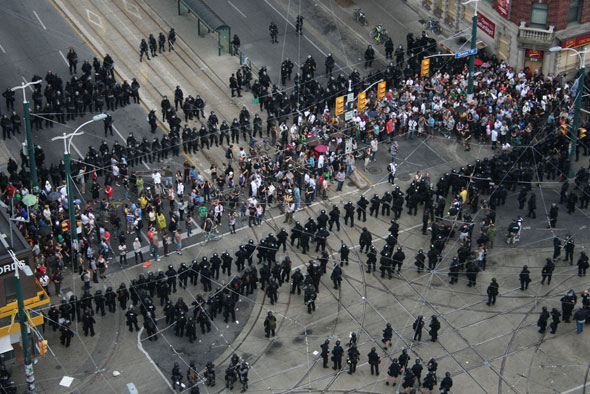 By Richard Rohmer
Probably every columnist/blogger/journalist in Canada has published an opinion (her/his own) on the federal “staged in Toronto” G20 Conference (on the one hand) and the security debacle that surrounded it just as hundreds of bad protesters plus innocent pedestrians were seized then imprisoned in cages or simply entrapped on the street.

For us Zoomers across Canada who witnessed on television and computer bits and pieces of both events thinking they were one and the same — melded, if you will — we now know that the two were in reality totally distinct in role, function and execution.

The word ‘execution’ wasn’t in any police enforcers vocabulary, but for those non-protesting citizens (including lots of Zoomers) who were caught in the police trap at Queen West and Spadina from about 6 p.m. to around 11 p.m. must have felt they were being executed. They were forced to stand (the hundred/two hundred of them including dogs) for that length of time in heavy, heavy rain under thunder and lightning clouds, no place to sit, no place to urinate or defecate, no food, no water and no police explanation as to why they were being held.

Of all the scenes of police action; of shots of the antics of the ‘anarchists’; of the tense confrontations between the marchers (whoever) and the police, that Queen-Spadina scenario on Sunday evening/night was the toughest to take, to watch, to understand. That is/was so given, among other things, that the G20 conference was over/finished and the grand leaders of the world were gone. They were on their big, comfortable aircraft on their respective ways home.

As a Zoomer, a senior lawyer/litigator, I fully expect that a large number of the citizens caught in that dreadful Queen-Spadina trap will already have been approached by gaggles of Ontario, B.C., Quebec and other lawyers who specialize. In what? Class actions, that’s what.

Up in Huntsville (the site of the G8 conference immediately before the G20 in Toronto) the OPP under the thorough command of Commissioner Julian Fantino (who leaves the OPP next month) provided solid security on land and on the waters surrounding Deerhurst Lodge where the eight leaders met. And Fantino’s OPP personnel had a strong presence in the huge police contingent that assembled in Toronto for the G20.

Apart from that Queen-Spadina incident the performance by the massive grouping of police in Toronto from Ontario and many provinces across Canada was the result of superior organization and conduct under the tested and true leadership of Toronto Chief Bill Blair. The ability of his multi-sourced staff to move and redeploy their thousands of people around Toronto by bicycle, bus or on marching foot to meet fast changing situations was remarkable.

There was not one instance of any police personnel who were confronted by “in your face” protesters backing down or giving in to the severe, visceral taunting that they were suffering. That took guts, discipline and training; and a dedication to responsibility and duty by each police officer with feet on the ground as a strong link in the cohesiveness of her/his particular unit whether from Calgary, Orillia, Montreal or wherever in Canada.

The physical damage to downtown Toronto was evidently both unacceptable and (even with a massive police presence) unavoidable. What that damage (combined with all the psychological/emotional hurt suffered by the hundreds of innocents who were locked up) means is that what the convenors of the future G20 meeting should strive for is finding a world meeting site that cannot be reached/accessed by the totally predictable bad people, the anarchists in black or their destructive colleagues/brethren.

Perhaps some remote island in the Indian Ocean with a huge landing runway (from World War II) would do the trick. I know of one and there must be many more.

Generally speaking, we Zoomers know that Toronto’s G20 conference and its resolutions; and the security efforts and costs to protect the invited heads of government/state are history. We hope that the costly Toronto lessons are not forgotten.

Then it’s on to the Queen and her visit to Toronto’s Queen’s Park on Tuesday, July 6th when this Zoomer (and family) will have the honour to be presented to Her Majesty for the fifth time!