With this week’s sentencing of former Illinois Governor Rod Blagojevich to 14 years in prison for political corruption and our own Defence Minister Peter Mackay in hot water over using a government helicopter to transport him back from a fishing trip, political scandals are very much on everyone’s mind.

As long as there have been politicians, there have been accusations of one of them misusing political office for personal gain. In fact, corruption scandals in Canada date back to our very first Prime Minister, none other than John A. Macdonald. So let’s take a look at some at the juicier federal scandals that have  made headlines, sparked outrage, ruined reputations and shaped history.

Summary: Macdonald and his Conservative Party receive payola from Allan in return for giving him the contract to build the railway in B.C. Smelling a chance to unseat Macdonald, the Liberals cry corruption. Although Macdonald strenuously denies the charges, he’s quick to gauge public reaction and is forced to resign. The reeling Conservatives lost the 1874 next election to the Liberals and Canada’s first major political scandal was born.

Summary: During the prohibition era, the federal Liberal government was charged with the task of making sure contraband liquor did not cross the Canadian border into the U.S. However, King’s own minister of customs and excise, Jacques Bureau, had his own views on the matter. In league with bootleggers, Bureau ignored the rules and allowed booze to flow freely across the border. Caught up in the growing scandal, King asked Lord Byng to dissolve parliament, hoping to call a snap election and defuse the accusations. Byng refused, King resigned and Conservative Arthur Meighen was asked to form a new government.

Summary: A great public outcry bursts forth when Conservative Fisheries Minister John Fraser is accused of ignoring his own public health officials and knowingly allowing a shipment of possibly tainted tuna to go on sale to the public. Fraser is ultimately forced to resign, with Mulroney denying any knowledge of Fraser’s wrongdoing. As scandals go it was tepid at best but that didn’t stop the Opposition Liberals from using it to hammer away at Mulroney’s credibility. It also marked the beginning of an annoying habit of the mainstream press that continues to this day: affixing the suffix “gate” to any scandal, ensuring the public realizes it’s serious.

Summary: Although Mulroney was no longer in politics, he was subject of an RCMP investigation that was probing into possible influence peddling complaints dating back to when he was Prime Minister. Were secret commissions paid to members of Mulroney’s government to push Air Canada to purchase a number of Airbus jets? Did Mulroney accept kickbacks? Mulroney denied everything, sued (and won) for defamation of character and the case was dropped. The embattled ex-PM however later admitted that he had received cash payments of $225,000 from Karlheinz Schreiber, a mysterious German lobbyist allegedly involved in the affair. 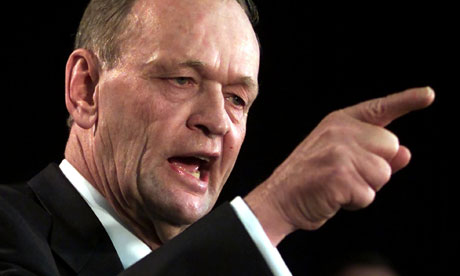 Summary: Jean Chretien had an ownership stake in a Quebec golf course and hotel. Before becoming prime minister, he sold his shares in the hotel to partner Yvon Duhaime. Later, when Duhaime applied for a loan to the federally run Business Development Bank of Canada, Chretien intervened on his behalf, phoning and meeting with the bank’s director in order to secure the loan. The scandal proved to be great fodder for Stockwell Day and his new Canadian Alliance Party, who used it to paint the Liberals as corrupt.

Players: Jean Chrétien, Paul Martin
Summary: This major scandal involved members of the Liberal party misusing funds that were intended for government advertising. Instead, the money was siphoned to firms that employed Liberal organizers and was used to help prop up the Liberal party in Quebec. The scandal caused a huge uproar, dominating headlines and causing the resignations of dozens of highranking Liberal ministers, bureaucrats and functionaries. The fallout from Adscam caused a split in the Liberal party between Chretien and new leader Paul Martin, which paved the way for the first Conservative minority government under Stephen Harper.

Player: Maxime Bernier
Summary: Foreign Affairs Minister Maxime Bernier is brought to the carpet for implications that his then-girlfriend, Julie Couillard, had romantic ties in the past criminal bikers from Quebec. Prime Minister Harper rejects calls for his resignation until it comes to light that, during a trip to Bucharest, Bernier had misplaced classified briefing documents in his hotel. The scandalmongers smell victory, Bernier resigns his cabinet post but runs for re-election in 2011, wins and is once again given a cabinet position!

Player: Ruby Dhalla
Summary: Liberal Ruby Dhalla, the party’s multiculturalism and youth critic, comes under fire over allegations that she has consistently mistreated her two nannies. The accusations include: making the nannies work 16-hour days, paying them in cash, forcing them to shine her brother’s shoes and seizing their passports. Dhalla resigns her post.