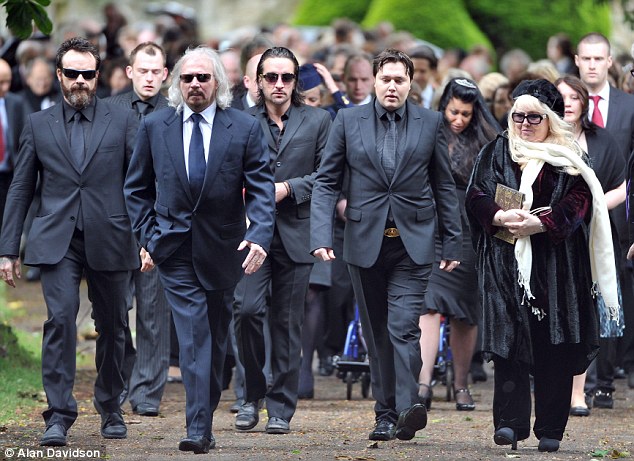 It was one of Robin Gibb’s final wishes to say farewell to the people of his beloved English hometown. Earlier today, escorted in a glass-sided white carriage adorned with flowers, the casket of the legendary Bee Gees singer made its way from his estate though the streets of Thames, flanked by loved ones and crowds of heartbroken fans, en route to his funeral.

“The three of us have seen a lot of crowds but I’ve never seen so much love in one crowd as I’m looking at today, for Rob, you know, for the music,” Barry Gibb, Robin’s older brother and last surviving member of the famed disco group, said during his eulogy. “And it’s an intense experience for me.”

Robin Gibb passed away from kidney failure on May 20 at age 62, following a battle with colon cancer among other ailments.

Four black horses, ornamented with golden treble clefs and led by a piper, pulled Gibb’s carriage while the singer’s wife Dwina, and three children, brother Barry, loved ones, and prominent friends such as lyricist Tim Rice, followed. Also accompanying the procession from Gibb’s home to St. Mary’s Church were Gibb’s two Irish wolfhounds – Ollie and Missy – who wore black bows. Mourners lined the street to greet Gibb on his final ride. Members of the Air Training Corps 594 Thame Squadron, in full uniform, arrived and paid tribute to Gibb for his work in honouring those who died in service of the Royal Air Force Bomber Command.

“Life is too short. In Robin’s case, absolutely too short,” Barry lamented. “We should have had 20 years, 30 years of his magnificent mind and his beautiful heart.”

“When you’re twins, you’re twins all your life. You go through every emotion,” Barry said of the relationship between Robin and Maurice. “And they’re finally together. I think the greatest pain for Robin in the past 10 years was losing his twin brother.”

A number of Bee Gees songs were reportedly played at the private funeral service at the request of Robin, including How Deep is Your Love and I Started A Joke. The singer was buried at St. Mary’s.

Robin Hugh Gibb was born December 22, 1949 on the Isle of Man. He co-founded the Bee Gees with brothers Barry and Maurice in 1958. The group went on to sell over 200 million albums and, in 1997, received induction into the Rock and Roll Hall of Fame. In 2004, each member of the group was made a Commander of the Most Excellent Order of the British Empire (CBE).

A public memorial service for Robin is expected at a later date.