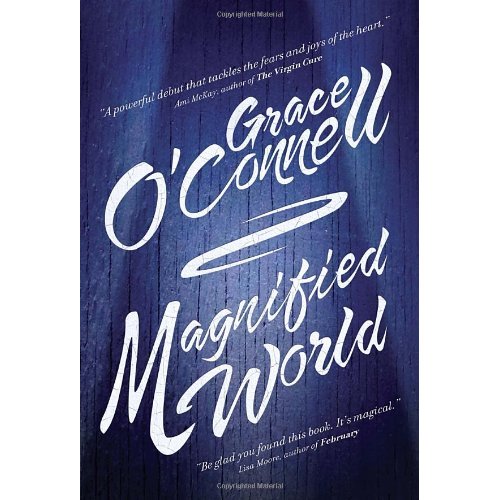 A pick in Great Cottage Reads in Zoomer‘s summer issue, Grace O’Connell’s debut novel Magnified World tells the story of Maggie, a 20-something dealing with puzzling blackouts and mysterious strangers in the wake of her mother’s suicide.

Athena McKenzie: How long did you work on Magnified World?

Grace O’Connell: It took five years. It changed so much from the original notes that I would say it was fully rewritten three or four times in that space. It was intense. Maggie was fully realized, but it was more as if I had to get to know her than her changing. She resisted getting known, which is consistent with the sort of person that she is. That took some time. The development of Carol [the mother] was what really shaped the writing process. She was more in the background in early drafts and things started to go a lot better when she became more central to the story.

AM: Why did you what to write about grief and loss?

GC: It started out differently really, more as a meta-narrative about writing. But it felt a little unmoored and too cerebral. I really wanted a strong narrative and a real emotional core. When I started examining the themes, it didn’t feel as pinned down as I wanted it to be. The grief came naturally out of exploring Maggie’s feelings about her mother and their relationship. That’s where the narrative took me. It was a little intimidating to go there because I haven’t lost a parent or any close family members really, so it was almost an appropriation of voice issue. Worrying whether it would ring true to people who have gone through these types of experiences – especially suicide, because it’s such an emotionally explosive issue. But it is really an incredibly individual thing. And I did quite a bit of reading about losing loved ones to suicide and the experience of being left behind in that situation. Which helped and was also very difficult at the same time. It was a dark period when I had to do all that reading.

AM: Sometimes Maggie, and thereby the reader, is unsure of what is real and what is imagined. Was that challenging to write?

GC: It was challenging to write. I was leaning toward a lot more ambiguity but I had early readers who felt very strongly that a more definite resolution was needed. In the end, it mattered less who or what and more what Maggie got out of it and what she was willing to do.

AM: The way you root the reader in the setting, Toronto is almost like another character. Was that intentional?

GC: In early drafts, it was an anonymous city, sort of a mash-up of Toronto, New York and all the places that I’ve spent time. As I went on, I realized that if I was going to write in first-person and write in Maggie’s voice – and she’s really pent herself up in such a small corner of the city – it needed to be grounded in details in order to read in a genuine way. Also, I think the city very much became an individual to Maggie in her life. Because she has limited herself and stunted herself in the interest of watching over her mother, the city becomes a friend to her, but also a parent – something that’s consistent and dependable when not very much else in her life is.

AM: What writers inspire or influence you?

GC: I had the opportunity to work with Lisa Moore when I was writing the book, which was amazing. Her prose style is so gorgeous, deft and light-handed but rips your heart out. That is something I certainly aspire to someday. I love her short stories; I think I’ve read Open and Degrees of Nakedness 10 times each.
A book that I read early on in life and one I was really impacted by was The Edible Woman by Margaret Atwood. I always saw a lot of parallel between Gil [in Magnified World] and Duncan, the character that Atwood’s Marian acts through in a very similar way to Maggie acting through Gil.