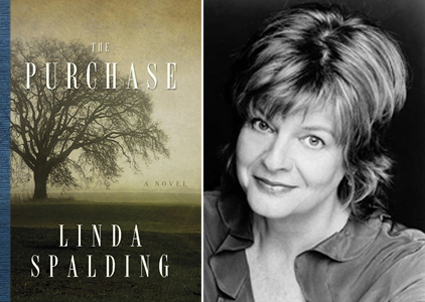 Inspired by the author’s own family, The Purchase tells the story of Daniel Dickinson, a widowed Quaker who is forced out of his fellowship in Pennsylvania in 1798. Resettling in the Virginia frontier, the firm abolitionist finds himself the unexpected owner of a slave, setting in motion a tragic chain of events that reverberates through his children’s lives.

Athena McKenzie: I understand that the story relates to your own family history in some way. Can you tell me about that?
Linda Spalding: Very far back. It was history I really couldn’t access, so I had to pretty much make it up. But I did have names and dates and interesting status data that still exists.  I found the deed for the land and all the interesting land transactions that were going on, which were very complicated – the way people bought and sold land in those days was amazing. It was just a fertile field for me. When I learned in childhood that we had slaves in our family way back and it was boasted that we were so wonderful because we’d freed our slaves, I thought, “Yeah, well, but we had them.What was that about?” And then I found out that we were Quakers when we first came to [America], so how did that happen? I became very interested in Quakerism in my teens and I did a Quaker pilgrimage to England with the Friends World, so I just knew enough about it to know how unlikely it would be that somebody who was an abolitionist would buy a slave. And buy more than one.

AM: What lead you to write the story now?
LS: I’ve been working on it a long time, I hate to tell you. I actually started it when I was working on my last nonfiction book. I think because I’d finally made the trip down to Virginia and saw it. Actually saw what remained of the first cabin, which is amazing. A pile of stone and boards but it’s there. That really hit me. And it goes on, the story goes on beyond where I tell it. It was the right time in my life.

AM: Was there anything else that really stood out for you when you were down in Virginia?
LS: I was down there for just a few days, and went to courthouses and libraries and looked at records. There is still so much Civil War passion and sentiment in that part of the world. I think that part of Virginia was part North and part South, though mostly South. But West Virginia, which is right about it, was a Northern State. It had actually split off. All of that stuff is still really relevant and I had never been in the South before, so I was fascinated.

AM: How do you approach writing fiction differently than one of your non-fiction works?
LS: Fiction is so much harder, I think. Non-fiction comes more easily to me because I always kept journals. Even as a child I got used to that voice in my head, so I could just think aloud, or on paper. Fiction is very different because I have to make up the plot. I can still hear voices and what was fun about this book was using the multiple point of view, which I hadn’t done before and it was challenging. But I find the plot thing very complicated. I’d be wandering off in too many directions.