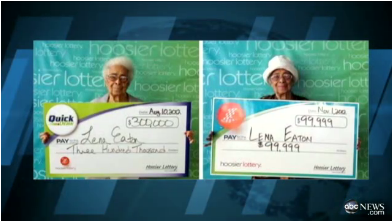 Maybe you’ve spent your life saying, “How great would it be to win the lottery!” And have dreamt of the trips you would take and the bills you could pay off if that day came. Well, don’t stop dreaming because 91-year-old Lena Eaton didn’t and she not only won the lottery once – but twice! The Indianapolis resident and great-grandmother won on a quick-draw ticket for $300,000 in August and again last week for $99,999 – against the odds of 646,000-to-one, no less. Eaton says some of the money will go to her house renovations, travel and her family – including her 20 great grand-children. Reports say the odds of Eaton winning two lotteries were one to 5.7 trillion. We’ve said it before and we’ll say it again – it’s never too late.