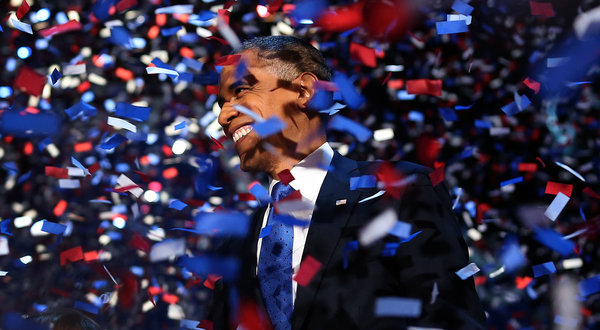 After a long, heated and costly campaign, U.S. President Barack Obama has overcome voters’ uncertainty about the economy and has been returned for a second term. Obama narrowly won the nationwide popular vote, 50 per cent to Mitt Romney’s 49 per cent, winning at least 303 electoral votes. However, Washington remains strongly divided with Obama’s fellow Democrats controlling the Senate and Republicans keeping the House of Representatives. In his acceptance speech early Wednesday morning, Obama said, “Tonight in this election, you, the American people, reminded us that while our road has been hard, while our journey has been long, we have picked ourselves up, we have fought our way back,” Adding, “We know in our hearts that for the United States of America, the best is yet to come.” Click here for his full speech.

Besides Obama winning a second term,  individual states also voted on a number of propositions, including:

Check out what all of the major news sites had to say about Obama’s win: