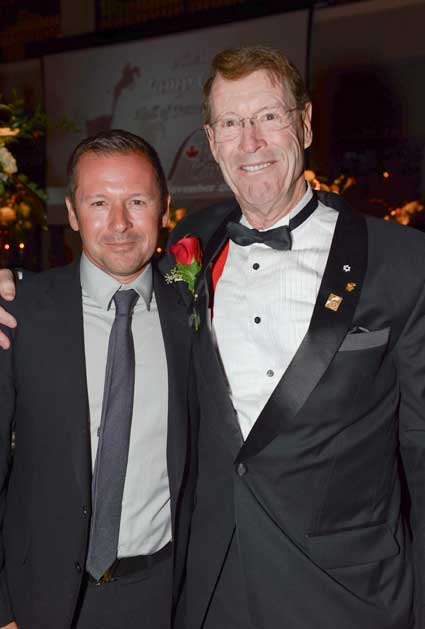 More than 300 members of the equestrian community filled the Liberty Grand to full capacity to celebrate the inductions of Millar, who set a world record with 10 Olympic appearances in London, and Hickstead, the horse who captured a nation’s heart with his winning style and who tragically died a year ago while finishing a show in Europe.

Fondly known as “Captain Canada” to his legions of fans, Millar made his Olympic debut in 1972 and has been named to every Canadian Olympic Team since. After joking that he would retire after the Olympic Games come to his hometown of Perth, Ont., Millar turned serious and said, “I love riding, I love the people in riding, but most of all, I love the horses. As some wise person once said, if you are lucky enough to find something that you love to do, you will never work a day in your life.”

“I would be lying if I said it gets easier,” said an emotional Lamaze, who won individual Olympic gold at Beijing in 2008 aboard the bay stallion.  “I am thankful to have had the honour of riding Hickstead; everything I ever asked him to do, he tried his best to answer.  It got to a point where I knew he wouldn’t make a mistake; it was up to me to get it right.  This induction is a wonderful recognition of his life and accomplishments.”