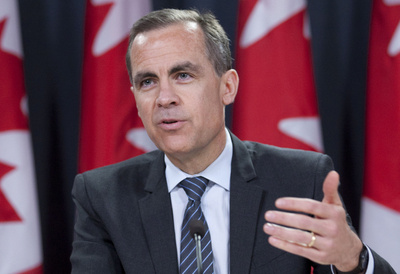 Finance Minister Jim Flaherty announced this morning that Mark Carney, Governor of the Bank of Canada since 2008, will be departing his post next year to take on a similar role with the Bank of England. The highly respected Carney, 47, is credited as the man who steered Canadian financial institutions through the worst of the fiscal meltdown, winning him plaudits worldwide. Carney will stay on with the Bank of Canada until July, 2013 at which point he’ll become the 120th person (and first foreigner) to head England’s central bank. The British pound surged on the news of Carney’s appointment.

Wall Street Journal: “the most qualified person in the world to be the Bank of England’s governor”

Jim Flaherty announcement: “Our financial system has consistently been ranked as the soundest in the world.”

Bank of Enlgand: “His reputation as an outstanding central bank Governor goes before him”