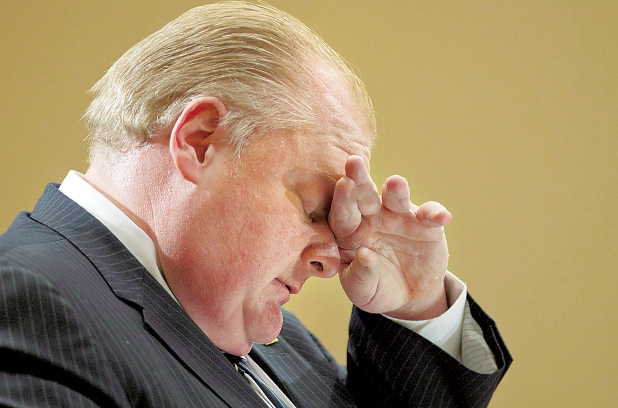 Rob Ford’s tenure as mayor of Canada’s largest city is over – for now. Justice Charles Hackland removed Ford from his post as mayor of Toronto this morning after finding him guilty of violating a provision in the city’s Municipal Conflict of Interest Act.

The charge was originally brought forth by Toronto resident Paul Madger, who earlier this year accused Ford of violating the act when, in 2010, he used city resources while fundraising for a football foundation in his name. A city councillor at the time, Ford was ordered to repay the money raised – $3,150 – and subsequently spoke in his defence and then cast a ballot in favour of himself when city council voted whether or not Ford should pay back the money. Madger’s claim that Ford violated the city’s Conflict of Interest Act resulted in today’s guilty verdict and subsequent removal of Ford from office.

Justice Hackland did show Ford some leniency, however, granting him permission to run for office in the future. Ford has 14 days to leave office. Until further plans are made, most believe Deputy Mayor Doug Holyday will assume the mayor’s chair.

“If they dismiss me from office … I will be running again,” the Globe and Mail quoted Ford as saying on news channel CP24 in August. “If the judge says I can run again and I lose my job, I guarantee I’ll just say, ‘When’s the next election?’ because I’ll be running for mayor.”

Ford’s removal from office follows a tumultuous month for Canadian mayors. Corruption scandals claimed the mayoral seats of both Montreal mayor Gerald Tremblay and Laval mayor Gilles Vaillancourt, both earlier this month, the later having served in his post for 23 years. Meanwhile, London, Ont., mayor Joe Fontana refuses to step down despite critics calling for his job as a result of fraud charges.

Suddenly, Calgary mayor Naheed Nenshi’s problems don’t look so bad. He lost a Grey Cup bet to Ford when the Toronto Argonauts defeated the Calgary Stampeders last night, meaning he has to donate his weight in food to a Toronto food bank and wear an Argos jersey during a city council meeting. Still, as the plight of other Canadian mayors has shown this month, it could be a lot worse.