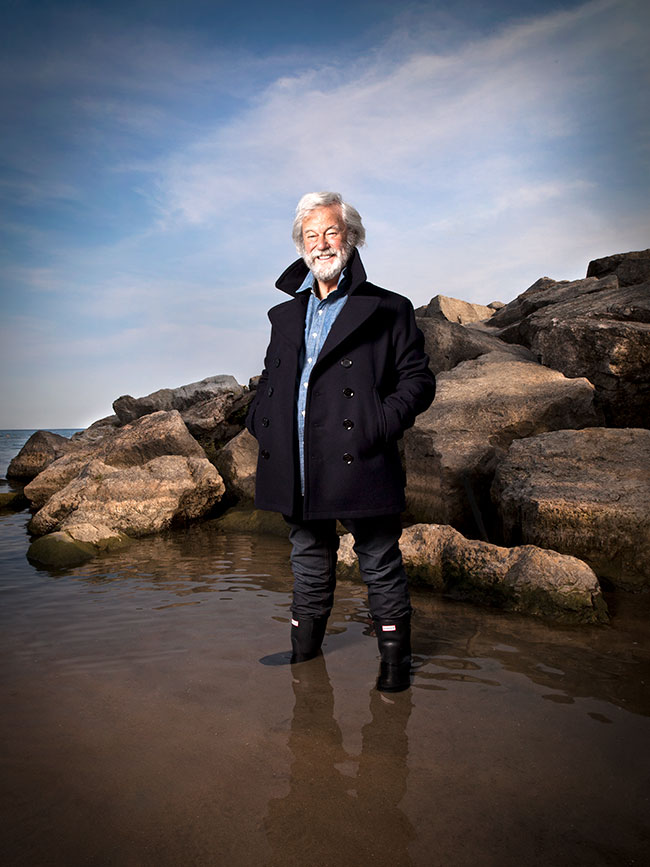 Gordon Pinsent as he appeared on the cover of Zoomer Magazine's November 2012 issue. Photo: John Hyrniuk

In celebration of Gordon Pinsent’s 90th birthday today (July 12), we’re revisiting our November 2012 cover story with the beloved actor in which he discusses acting, aging and his celebrated career.

Ever the rowdyman, Gordon Pinsent pens a candid memoir and looks to what’s next.

His voice is striking and familiar. The rich, lilting baritone turns heads as we walk across the beach, and he muses about the nearby bluffs, the white cliffs prominent against the cerulean sky. When we reach our destination near a peninsula of rocks, a female bystander loiters nearby until he speaks and then, with a contented sigh of “Oh, there’s that voice,” she wanders off.

Even under his lush beard and mane-like shock of white hair, Gordon Pinsent’s face is as recognizable as his brogue. At one point he expresses concern, an eyebrow raised as he gestures to his facial hair. Reassuring him that it lends a Hemingwayesque appeal, I’m rewarded with a long chuckle (it’s much later when I remember his voice work in the Oscar-winning short film The Old Man and the Sea).

The 82-year-old has grown the whiskers for his latest role, as fisherman and town’s statesman in The Grand Seduction – just one of many parts in a remarkable career. While the bulk of his memoir Next is a conversational exploration of his life through his work, more than 10 pages at the end catalogue “selected performances” since 1954, including appearances in almost every major Canadian television show. There are also his notable films, like The Shipping News and his stunning performance in Away From Her. And for some, he’ll always be The Rowdyman, the film he wrote and starred in back in 1972. It was one of the first feature-length movies made in Pinsent’s native Newfoundland, where he was born in 1930 and which he left in 1948 to pursue his acting dreams.

I’m also from the island, where Pinsent is adored. His stature there is only partly due to his success in the fickle world of show business. He has the ability to not take himself too seriously, a prized trait on the Rock. During my afternoon with him, watching the actor charm everyone we encounter, a song from The Rowdyman keeps popping in my head: “It’s a Lovely, Tell Your Mother Kind of Day.”

Director Sarah Polley, who has known him since she was a child, cast him in her movie Away From Her. She describes him as a true gentleman.

“He learned the crew list with the same intensity as he learned his lines. He makes everyone feel so appreciated. He is also one of the funniest people I’ve ever met,” she says.

Of course, for a certain generation, he was off the radar until “Canadian Icon Gordon Pinsent” hilariously shared tidbits from the memoir of “another famous Canadian, [the then] 16-year-old Justin Bieber,” on This Hour Has 22 Minutes in 2010.

“We got something from [Bieber] afterwards. It went something like, ‘Ha ha ha. He’s a funny man. He’s the perfect one to read my book. We should be able to laugh at ourselves.’ It was better than being taken to court,” Pinsent tells me.

Pinsent’s filmography reads distinctively Canadian, but for a time in the late ’60s and early ’70s, the actor was based in Los Angeles. In Next, Pinsent reflects on his time there and his roles in the original Thomas Crown Affair with Faye Dunaway and the campy Blackula – Pinsent just shakes his head and laughs when I mention the film – as well as his spots on television in shows like Hogan’s Heroes and Robert Wagner’s It Takes a Thief. After almost six years, Pinsent decided Hollywood was not a good fit.

“I had a dreadful time there really. I thought that I could use up to three lifetimes there just waiting in line for better material, for good opportunities. It was at the end of the golden era, and a lot of movie stars were moving over to television. The possibility of getting the best material or a good piece of material in town was very, very tough. I felt very strongly I didn’t want to hand my life over – the possibility of winning or losing in this business – to these people, just strangers.”

Although he tells me that leaving Hollywood is a decision he does not regret, an intriguing part of Next concerns his remorse for not going back to Los Angeles for the 2008 Oscars, the year Away From Her was receiving global acclaim and Sarah Polley was nominated for Best Adapted Screenplay and Julie Christie for Best Actress.

Rewatching the movie, I am once again amazed by Pinsent’s portrayal of Grant, a man losing his wife to the ravages of Alzheimer’s disease. It seems a glaring oversight that he wasn’t nominated for an Oscar along with Christie and Polley.

“I think he brings such depth and humanity to the characters he plays. In Away From Her he is the centre of the film. He is in almost every single frame. If the film works at all it is because of him,” Polley says.

Pinsent’s Toronto condo is a bright two-storey space, full of art: some connected to his career, including a large painting of the Rowdyman near the front door. Flashing a mischievous grin, Pinsent draws my attention to a statue in his living room, a dog he acquired when somebody told him he needed a pet. Behind it lies a small metal circlular lump that looks like something that needs scooping, an addition from actor and son-in-law, Peter Keleghan. Pinsent’s laugh is contagious and irresistible.

This enthusiasm underlies an openness that may explain his career-long habit of saying yes to any opportunity – one reason for his endurance and seeming omnipresence in the Canadian entertainment scene. But he tells me accepting a job is not always about the work.

He admits that filming in Trinity Bay, N.L. was part of the attraction to The Grand Seduction. Directed by Don McKellar, the film is a remake of the French-Canadian Le Grande Séduction. It tells the story of a small town trying to lure a doctor to their dying community in order to secure a new factory.

“I’m happiest when I’m in the middle of a group of people who are there for the right reasons … It gives me a chance to do good with talented people … and jump in the car and go see the brother.”

While Pinsent is animated as he discusses his only remaining sibling, his 90-year-old brother Harry, “the most unforgettable character,” he becomes more contemplative when he talks about his children. Leaning back into the throw cushions on his sofa, he takes longer pauses between sentences, his distinctive voice more measured and soft.

He has three children, Barry Kennedy and Beverly Pinsent, from his first marriage, and Leah Pinsent, his daughter with his late wife, the acclaimed stage actress Charmion King.

Although Pinsent did not raise Barry and Beverly, circumstances he recounts in Next, he says their relationship has “certainly turned out to be something to be really quite magical.

“They help make up a wonderful life for me … to know they have grown so wonderfully and that their outlook is extraordinary with not having had that time together.”

Pinsent was present for Leah’s upbringing, and he describes her as the force that keeps him going.

“Whether it’s having to do with my working life or private life, if it wasn’t for her, I don’t know what I would be doing.”

The loss of his wife, Charm, who passed away in 2007 from emphysema, still weighs on Pinsent and underscores the more emotional parts of his memoir. Along with the photographs of King on the grand piano, Pinsent points out the paintings of her he did himself, including a dramatic portrait in the front hall, done in red, from their years in Los Angeles.

“I’m not keen on that idea of letting go … those changes that have come about – let’s call it the aging process or the changing times – those things are hard to bear. I don’t like them.”

Chief among the things Pinsent doesn’t like about getting older is the attitude in his industry toward his 80-plus years.

“Now what that is is some sort of gothic idea that we have had drawn from former times when the word 80, the number 80 was the worst thing you could possibly be. If he’s 80, he must be falling apart and he’s not telling us. Well, I ain’t falling apart.”

Along with his other creative pursuits, Pinsent has been dabbling with poetry for as long as he’s been in show business. Throughout Next are enticing snippets of his poems. And now his verse has been set to music by Travis Good of The Sadies and Greg Keelor of Blue Rodeo. According to Pinsent, the album came about quite organically, when the three sat down to see if his poetry could be used as lyrics.

Which brings us back to Pinsent’s voice. When Good, Pinsent and Keelor released their CD, Down and Out in Upalong last spring, it included a second disc of Pinsent’s spoken verse over music. Like his memoir Next, the tracks speak to his roots in Newfoundland, the experiences of his career, his relationship with King and her loss. Watching Pinsent gaze out across the water, I think of the track “Let Go,” which is arresting in its simplicity and confessional overtones and all the more riveting when delivered in the seductive lull of Pinsent’s familiar burr.

“Let go voices I knew so well, let go. And let go fame that was so fleeting too. And the sweet, sweet pain of loving you, let go.”

This article originally appeared as the cover story in Zoomer’s November 2012 issue.

Elton John on Diana, Paul McCartney and Other Celebrity Encounters in His New Memoir “Me”