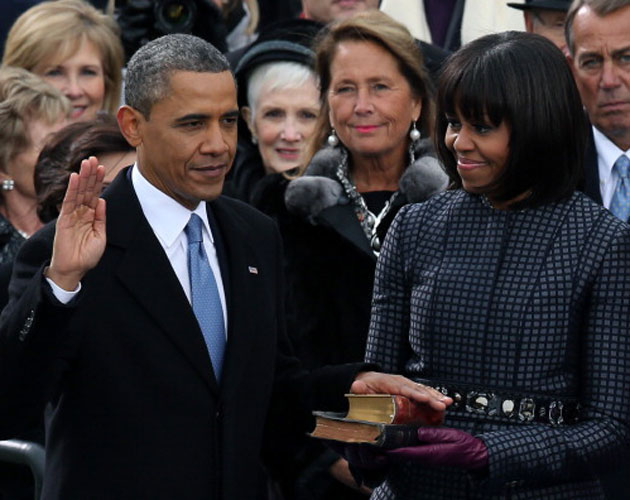 On an overcast Martin Luther King Jr. Day in Washington D.C., up to 800, 000 people crowded into The National Mall to watch as U.S. President Barack Obama was ceremonially sworn in for his second term.

Though President Obama’s official swearing in took place yesterday (by law, the oath of office must be taken on January 20th) today’s public swearing-in before a crowd of former presidents, celebrities and politicians echoed back to images of Obama’s historic inauguration four years ago.

Musician James Taylor then sang American The Beautiful before U.S. Chief Justice John G. Roberts Jr. swore President Obama in for the second time in two days. The president then kissed his wife Michelle and daughters Malia and Sasha as the crowd cheered and cannons fired.

Following the inauguration, President Obama’s inaugural address discussed the economic, social, and international challenges America has faced in the past decade, while offering hope for prosperity and equality for all Americans in the coming years.

“We have always understood that as time change, so must we…America’s possibilities are limitless,” Obama declared, harkening back to the optimism he inspired during his 2009 presidential run. “My fellow Americans, we are made for this moment and we shall seize it so long as we seize it together.”