From the “Foot in Mouth Dept.”: Japanese Minister Says Seniors Should “Hurry Up and Die” 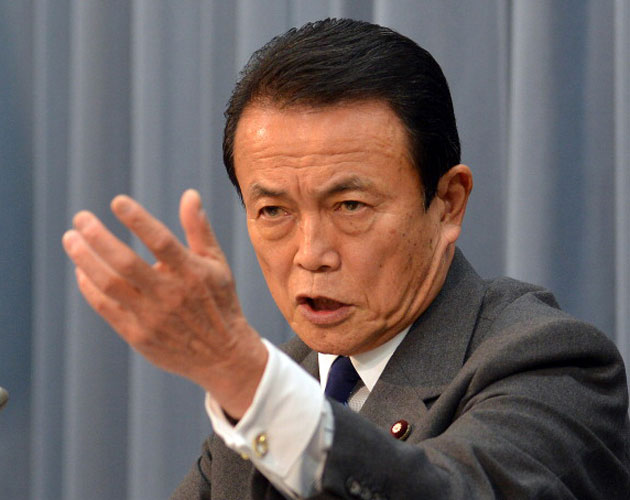 From Japanese finance minister Taro Aso, the man who once mocked “penniless young men” as not worthy of the respect of a spouse and referred to ill patients as “tube persons” comes this latest nugget o’ wisdom: in order to ease the strain of health-care costs on Japan’s lagging economy, seniors should “hurry up and die.”

You see, Japan has one of the world’s highest life expectancies. Consequently, they also have the oldest population. With reports that 40 per cent of the population is expected to eclipse age 65 by 2063, coupled with tumbling fertility rates and the country’s economic woes, something’s got to give. That something, apparently, refers to the pulses of senior citizens across Japan.

“Heaven forbid if you are forced to live on when you want to die. You cannot sleep well when you think it’s all being paid for by the government … This won’t be solved unless you let (seniors) hurry up and die,” Aso reportedly said at a government meeting regarding social security reforms.

Yes, Japan’s economy is in trouble. Why, you ask? One Bloomberg article provides quite an eye-opening read: huge government debt, low marriage and fertility rates, relocation to the west by female workers and Japanese companies, falling land values, national politics in a state of shambles and a lack of support for sustainable resources. And yet, somehow, the finance minister concludes that grandma kicking the bucket would help make all these bad things go away.

So who exactly does this is young, brash politician think he is? Well, to start, he’s 72 years old! Yes, a septuagenarian is imploring Japan’s seniors to stop living. Even better, he was once the country’s prime minister.

Once you’ve stopped shaking your head in disbelief, take note that the Bloomberg article pins the blame for the aging population quandary on the Japanese government itself, saying, “What makes the problem so serious in Japan is the country’s refusal to do what other countries have done: admit massive immigration of younger people from overseas.”

Aso apologized for his comments, noting he was referring to his own wishes if, one day, he’s in a state of infirmity. Or, in Aso-speak, if he’s ever a “tube person.”

Until then, he’s content to ensure his public image “hurries up and dies” before he does. A quick review of some of Aso’s greatest hits clearly shows his lips move faster than his brain.

He’s attacked seniors before – or at least the “feeble” ones he felt don’t take care of themselves. “I see people aged 67 or 68 at class reunions who dodder around and are constantly going to the doctor … Why should I have to pay for people who just eat and drink and make no effort?” he asked in 2008, evidently not recognizing that many diseases and ailments that accompany aging aren’t related to lounging on the couch eating Cheetos.

Then, of course, there’s his gem about wanting to transform Japan for the better. You know, the sort of country “the richest Jews would want to live.”

Put in the context of his history of verbal blunders, perhaps seniors shouldn’t take too much offense from Aso’s most recent comment. It’d be on par with finding offence with Archie Bunker for a racial jab or George W. Bush’s grammar – simply put, you know the guy’s not playing with a full deck, and few actually take him seriously.

If anything, it’s the people of Japan – especially the over-50 crowd – we should feel for. Not only does Aso seem to hold little regard for seniors, but he’s in charge of the country’s finances. A country in desperate need of rational ideas. A country, in Aso’s vernacular, that’s essentially an economic “tube person.”

You’d laugh at the irony if this weren’t so sad.