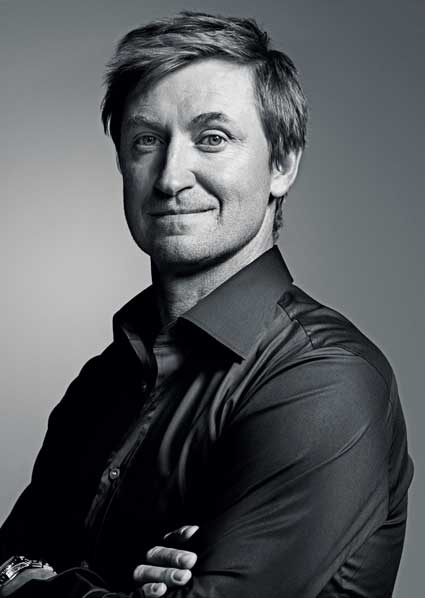 Perhaps the icing on the cake for Wayne Gretzky’s 52nd birthday on Jan. 26 will be a new job – and the answer to Toronto Maple Leafs fans’ fervent prayers. Rumours persist that the Great One (as he’s widely known in Canada) will replace Bryan Burke, fired president and general manager of the hapless hockey team. Read on for a look back at Zoomer’s very first cover boy (2008) and his conversation with Suzanne Boyd, the magazine’s editor-in-chief.

Canadian to the core. That’s why we chose him — the best-known Canadian of our era — to grace the cover of our first issue. He’s pretty much had an “age” named after him — hockey in the 1980s. Any assessment of his hockey accomplishments in the ’80s runs the risk of breaking down into worshipful babbling: 61 NHL career records, including seven NHL scoring titles, four Stanley cups, eight Most Valuable Player awards- Gretzky didn’t just break records, he obliterated them. His greatest record? Fifty goals in 39 games — which he set at 20 years of age. And let’s not forget Salt Lake City in 2002, when he managed Team Canada to an Olympic gold medal and re-established his place in the hearts of Canadians. Still in the mix, he coaches the Phoenix Coyotes,

Suzanne Boyd: This is a big year for you — it’s the 20th anniversary of your marriage and the trade to L.A. Your dad always told you: “Go where the puck is going, not where it’s been.” So where’s the puck going in the next 20 years?

Wayne Gretzky: I hope the next 20 years treat me as well as the last 20 years. I’m focused on my kids. I look forward to seeing them grow up and become adults. As for hockey, I enjoy coaching and hope I continue to have success within the NHL ranks. I love the competition and I love the team aspect and being around the guys.

SB: How is your dad Walter doing?

WG: My father is doing very well. He’s very active in charities, not only locally in the Brantford area, but all throughout Canada. I hope my children view me as a father the same way I view him.”

SB: Chris Chelios is 46 and still playing. Did you ever consider coming back after you retired in 1999?

WG: [laughs] Chris – he’s truly a gifted athlete who keeps himself in tremendous shape and still competes at a very high level. As for myself, I knew when I retired I made the right decision and, to this day, I still think I got out at the right time.

SB: The Phoenix Coyotes have a lot of young, exciting players. Are they ready for the playoffs this year?

WG: We do have a great, young, core group of guys. However, we have a lot to learn as individuals and also as a team. As for when we’ll make the playoffs, I’m not sure, but I do know that we’ll compete and work hard every night.

SB: As you were leaving our cover shoot in New York, you mentioned you were heading up to your vineyard. How much time do you get to spend in Canada?

WG: The NHL season allows time to visit Canada fairly regularly. As for the summer months, I enjoy getting back to Brantford to see my father, my brothers and my sister, but also to visit the winery in Niagara.

SB: You met your wife Janet on the set of Dance Fever. She’s in terrific shape. Do you work out together? Do you go dancing?

WG: We do work out regularly together. As for the dancing, I leave that to her.

SB: You’ve been a philanthropist ever since you instituted a charity event for the CNIB as an 18-year-old. What are your plans for The Wayne Gretzky Foundation?

WB: I’m very happy with where we’re at with my foundation; my brother Glen does a tremendous job running it for me. I look forward to continually being involved in supplying hockey equipment and ice time to underprivileged youth.

SB: Bryan Adams sang the national anthem at your last game in New York, and his was the last hand you slapped as you skated off the ice. What was it like for you to be photographed by him?

WG: Bryan and I have been friends for a very long time. Having him sing at my final game was truly an honour and one I’ll not forget. I admire Bryan’s work ethic and enthusiasm for photography, and I think he does an outstanding job with it.

SB: At 47, you are at the young end of the spectrum of the boomer generation — what we’re calling Zoomers. Do you think about getting older?

WG: I don’t concern myself too much with aging. I do keep myself in good shape and I enjoy every day as it comes.