Move Over, Alicia: Nine Celebs BlackBerry Should Have Made “Global Creative Director” 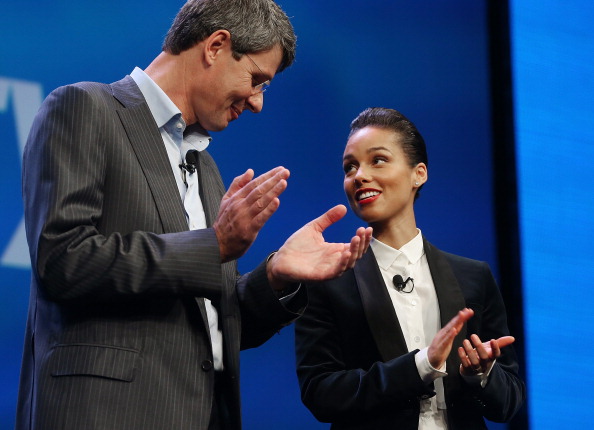 Along with the highly anticipated unveiling of the new BlackBerry 10 smartphone on Wednesday came the somewhat puzzling news that superstar singer Alicia Keys is the company’s new “global creative director.”

What, exactly, does that mean? No one’s really sure. What we do know is that Thorsten Heins, BlackBerry’s CEO, believes Keys, “will be bringing to us her enormous capabilities, as well as a vast network of relationships in the entertainment, social media and business communities, to help shape our brand and grow our business.”

Translation: she’s a celebrity with credibility among the youthful demo BlackBerry hopes to snatch from the clutches of iPhone and Android devices.

The 31-year-old Keys’ musical talent is undeniable, as evidenced by this ridiculously long list of her accolades and awards but, based on Heins’ statement, we believe there are other celebs BlackBerry should have considered for the global creative director post. Heins noted Alicia Keys would “help shape our brand and grow our business.” If you want to grow your business, look no further than domestic diva and confirmed BlackBerry user, Martha Stewart.

Think about it: she’s got celebrity clout. She’s a shrewd businesswoman (granted, you may want to keep her away from the BlackBerry stocks). And who could possibly be a more “creative” creative director when it comes to growing your business? Imagine a line of Martha Stewart knitted BlackBerry skins. Or an adorably crafty carrying pouch. Or a charging dock that that also serves as a potpourri holder. Can’t make those out of all the Grammys Alicia Keys has lying around, can you? We’re just going to put this out there: Brad Pitt. He’s a BlackBerry user and, as his Chanel No. 5 ad proves, he’ll shill a product in whatever ridiculous way you want – script unseen.

Picture Pitt, alone, onscreen, his genteel ruggedness bare in black and white, and you, lost in his beckoning eyes. Then, he speaks poignantly about infinity and the universe and journeys of enlightenment and any other cliché you can conjure before closing with, “Honesty. Truth. Love. 4G LTE capabilities. (Whispers) BlackBerry.” Okay BlackBerry, if you’ve got your heart set on a creative director from the 18 to 35 demo, consider these three candidates.

Justin Bieber: First and foremost, like BlackBerry, he’s Canadian! Secondly, he recently surpassed fellow pop superstar Lady Gaga as the most followed person on Twitter, closing in on 34 million followers. And where do many of those tweets originate? His BlackBerry! Now, look a few years into the future – can you say “BieberBerry”? We think you can.

Ashton Kutcher: He’s hip, has a proven history of investing in tech companies and is portraying Apple co-founder Steve Jobs in an upcoming biopic. How perfect would it be to stick it to the iPhone by having the guy playing its creator endorse the competitor?

Justin Timberlake: He uses a BlackBerry and, like Kutcher, is an A-list star who portrayed a major tech entrepreneur (Napster co-founder Sean Parker) in a major motion picture (The Social Network) and also has a history of investing in tech. You could boast, “He’s bringing BB back!” One office colleague of mine suggested that this whole deal is a case of “name recognition,” so to speak. Think about it: what major BlackBerry feature do users love? The keypad. Alicia KEYS … KEYpad.

In that case, why not partner with the aptly named duo of comedian Lewis Black and legendary rocker Chuck Berry? The hook: the new smartphone is the only thing that cheers the famously cantankerous Black up and, as a result, he rocks out with Berry on his latest hit “Roll Over iPhone.”

That’s right: “Roll over iPhone/And tell the Android the news.” We know what you’re thinking: Black and Berry weren’t the obvious choice? Believe it or not, no. Instead, we’ve got two words for you: Oprah Winfrey.

Simply put, Oprah can sell anything. Be it books, popcorn, Spanx, bakeries, or limelight-seeking medical professionals (Doctors Phil and Oz), Oprah’s millions of fans will literally buy whatever she tells them to. Heck, her endorsement sure didn’t hurt U.S. President Obama during his election run in 2008. We already know she uses a BlackBerry, so get her on board, and let the cash registers chime. Let’s be honest: this global creative director gig is a figurehead position. Alicia Keys isn’t sitting in on any board meetings or poring over any spreadsheets ahead of the quarterly investment report, so there’s no reason U.S. President Barack Obama couldn’t do this job. And the best part is, we already know he loves his BlackBerry. Remember when he was first elected to the White House and one of the few security concessions he refused to make was giving up the device? Play that up, give him the inside track on the newest BlackBerry models for Michelle and the kids, and the next thing you know he’s proposing tax increases for iPhone and Android users. Maybe we’ll even get a wacky Joe Biden cameo every now and then. And when President Obama’s term ends, we’re getting behind Hillary Clinton for global creative director in 2016.