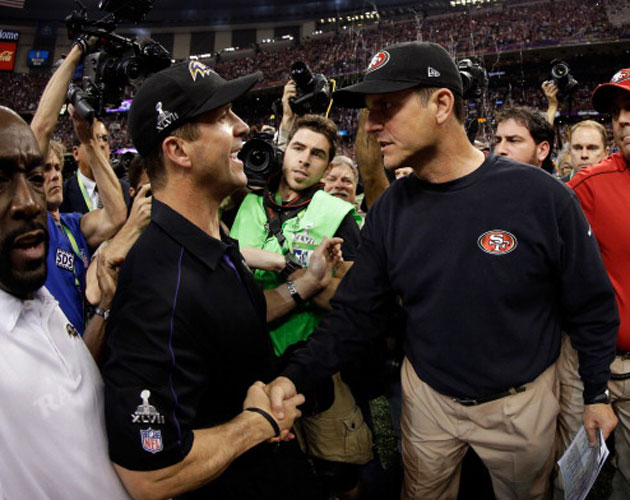 As players celebrated and confetti rained down on the field at the New Orlean’s Super Dome, marking the Baltimore Ravens’ Super Bowl victory over the San Francisco 49ers, two brothers met for an emotional handshake. The much-hyped Harbaugh Bowl was over: with John, 50, squeezing out an uncomfortably close win over younger brother Jim, 49.

While John was ecstatic over his team’s 34-31 victory, he struggled with his emotions as he met his brother and losing coach Jim for the traditional post-game handshake. “It’s a lot tougher than I thought it was going to be. It’s very painful.”

Undoubtedly, it was probably more painful for Jim. It’s always hard to lose a Super Bowl game, especially one where you had a real chance of winning and doubly so when it comes at the hands of your older brother. And Jim was not gracious in defeat. After the game, he complained bitterly (and correctly) about poor officiating decisions, which cost his team a chance at victory.

In a strange game, marked by a long delay when the power went out, Baltimore jumped out to a seemingly insurmountable 22-point lead but had to do everything they could to hold on to victory.

The night, however, belonged to Ray Lewis, the Ravens legendary linebacker who was playing in his final game. “It’s no greater way, as a champ, to go out on your last ride with the men that I went out with, with my teammates. And you looked around this stadium and Baltimore! Baltimore! We coming home, baby! We did it!”