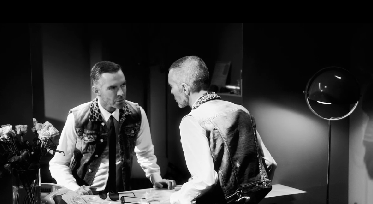 JULIE ENFIELD looks at fluidity in fashion through the eyes of dsquared2’s latest campaign, whose twin designers  pay homage to hitchcock and film noir with a gender-bending twist

If you ‘glamatize’ it, they will come,” explain Dean and Dan Caten, the Canadian twins behind the Milan-based Dsquared2 brand. As if on cue, they cross the contemporary divide between advertising and art. This goes far beyond the mere parade of clothing. This is life as it could be, as we want it to be.

As fashion fate would have it, advertising campaigns are now theatrical trailers where clothes become costumes in dramas that weave seductive, passionate stories around the lives we might possibly live – that we can only dream of. You’re not buying a dress, you’re purchasing entrée into a new identity, a secret world just behind the predictable one you inhabit. And this world, in its varied cachets, includes fragrance, cosmetics and decor. Indeed, the marketing is fierce and competition has pushed this art form into an Olympian realm, a de facto entertaining medium in and of itself.

And leading the ad pack? Dsquared2 ’90s “super-glamazons” (of course) with a tip-of-the-motorcycle-cap of acknowledgment to Peter Lindbergh’s photographs of Linda Evangalista, Naomi Campbell and Cindy Crawford decked out in minis, biker outfits and leather jackets.

Since their earliest days as flourishing designers back in the ’80s in Toronto, the Caten brothers have always delivered an ample measure of style, music and extravaganza. But this time, they break boundaries.

In their newly released 2013 advertising campaign video, Behind the Mirror, the 48-year-old fashionisti indulge their not-so-secret obsession with über-glam, making it perfectly clear that they won’t be boxed in by convention.

If pop culture is having a nostalgic Hitchcock moment right now, leave it to this duo to give it an-oh-so-modern spin. The doppelgänger theme of the twins’ video recalls Hitchcock at the top of his game in one of his most lauded films, Vertigo, in which the protagonist (played by James Stewart) falls in love with the ice queen  leading lady (Kim Novak). Did someone mention ice queens?

Filmed entirely in black and white, Behind the Mirror is a spectacular collaboration between the famed fashion photographers Mert and Marcus and Dsquared2. Clocking in at a mere one-minute, 24 seconds, it’s fashion-meets-drama-meets-art house noir.

The video opens with Dan (or is it Dean?) peering into a 1950s hotel room mirror with a strange, otherworldly gaze. An unsettling blend of violin accompanies his stylized movements as he languidly powders his chin and puts on a pair of sunglasses. Like Dorothy’s shoes in The Wizard of Oz, the sunglasses instantly transport him into a meticulously tailored montage based on a single high concept:
entering the mirror.

Enter Dean and Dan: as they walk, dance, crawl and strut through the mirror, transforming from man to woman, woman to man. But it doesn’t stop here. Each ensemble evokes a different persona from the gender-defying visionaries – all of them persuasive. It’s Hitchcock with a twist; the detailed scope of the twins’ charismatic spirit reveals itself and, for a moment, they are immortalized. You have to ask: what other designers can parade both their men’s and women’s collections with such potency and panache?

“Our 2013 campaign pays tribute to our flamboyant past,” explains Dan, who, along with his brother, Dean, double-handedly brought the fashion world to heel with their six-inch stilettos. “It celebrates the ’90s – those years of fun and adventure and it reminds us that even though today we find ourselves at the helm of a recognized global brand, it all started thanks to our alter egos.”

Menswear, womenswear, footwear, intimate wear, cosmetics, fragrance and, now, childrens wear – Dsquared2 is carried at Holt Renfrew and The Room at the Bay Vancouver – the “born in Canada, living in London, made in Italy” boy wonders from Willowdale, Ont., have been busy since their first appearance on the runways of Milan in 1994. Molto occupato. Their two most recent touchdowns in Canada included relaying the torch at the Vancouver Olympics and having their star embossed on the Canadian Walk of Fame. The duo’s clients go by first names only: Christina, Rihanna, Justin, Mariah, Fergie, to name-drop a few. And just when you thought you’d seen it all, think again.

Ultimately, Behind the Mirror is an intimate confession, a summoning of the designers’ history and a spectacular work of art. So engaging are the layers of visual impression, it takes a second – and possibly third – viewing to fully take in the surprise ending.

Here, ZOOMER catches up with the style stars as they criss-cross the globe.

Julie Enfield: So what is it about mirrors that attracts you both so much?

DAN: Mirrors reveal who we are, sure, but they also reflect our other self – our twin – our doppelgänger  – our double – our alter ego.

DEAN: The mirror is where we makes things right, but it’s also a new frontier where anything is possible.

JE: Few designers would dare to go where you have gone – to the other side. What’s it like?

DEAN: We don’t tiptoe around the fact that we love fashion. We design clothes that  we like to wear. For us it’s important to really get inside and experience the different ways in which both womenswear and menswear is evolving.

DAN: We’ve seen the mirror from both sides; not just what it’s like to wear something new but to actually be someone new with a fresh, new perspective.

JE: There’s a mirror-shattering scene in your new video campaign. Have you ever broken a mirror in real life?

DAN: Never. Never. Okay, maybe once. But that was more than seven years ago!

DEAN: I’m not answering that question!

JE: Hitchcock once said: “Suspense is like a woman. The more left to the imagination, the more the excitement …” What are your thoughts?

DAN: There’s a new generation of women who are succeeding in the world by listening to themselves. They want dreams and mystery as a part of their allure.

DEAN: The ending of our 2013 video campaign says
it all …

JE: How would you describe this season’s Dsquared2 woman?

DEAN: She is self-assured, vibrant and ultra-sexy, stepping out in her skyscraper bondage stilettos.

JE: What about the Dsquared2 man in the mirror. Who is he?

DAN: He’s classic yet punky. He’ s confident yet cool.

DEAN: His skinny tailoring comes accessorized with sunglasses, while his suitwear is offset by touches of denim, leopard skin and pins.

JE: If you could add an extra hour to each day,  what would you be doing?

DAN: Finishing the things I didn’t get to do the day before.

JE: Is the mirror a master, a diva or both?

DEAN: For me, the mirror is genderless – it’s a dreamscape where you can create your own reality.

DAN: It’s whatever you want it to be.

JE: If you could step inside the mirror, like Alice in Through the Looking Glass, what would you hope to discover on the other side?

DAN: An extraordinary and fabulous place where everyone gets along.

DEAN: A Barbie and Ken world in 50 shades of denim.

JE: Any parting words for us to reflect upon?

DAN: Find your own comfort zones. Be true to yourself. Live from the heart.