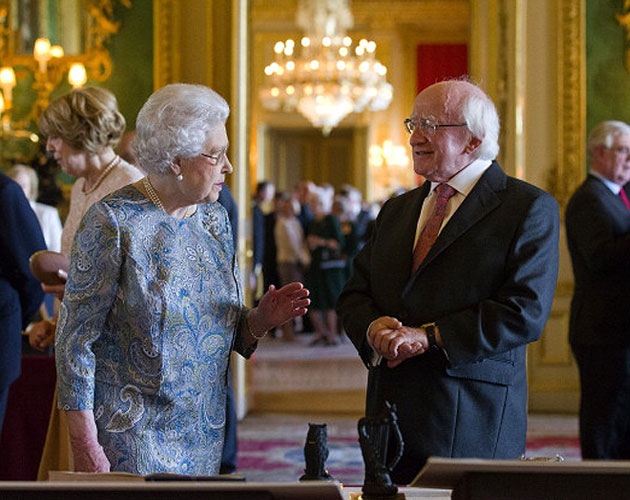 The two nations have had bad blood since – well, since a very long time – but then one day, they said, “This is silly! We’re neighbours. We should be … neighbourly.”

Such was the case this week when the Queen of England put on her hostess hat, pulled out the good china and threw an extraordinary welcome for Irish President Michael D. Higgins. It was the first time an Irish head of state had paid an official visit, and Queen Elizabeth made sure the occasion was marked with pageantry and polish. President Higgins was greeted by two princes (Charles and Philip), one Camilla and a throng of onlookers waving both Irish and British flags (the pick-up is always so important – just ask any frequent flyer). The town crier let it be known that the Queen had received her special guest (never mind email or text – where’s the sense of tradition in that?). The Queen and the President were then whisked away to Windsor Castle by horse-drawn carriage escorted by a fleet of (gentle?)men. Later that day, the sparkling dinner banquet that awaited them was the stuff of fairytale: a long, lavishly decorated table with enough room to seat a small duchy of dignitaries was topped with glittering dinner service and floral arrangements to rival estate garden topiaries. And the dinner attendees included celebrities like Dame Judi Dench (who looked so comfortable, so composed and so at ease we have to imagine that this is just another fabulous weeknight outing for her) and Daniel Day-Lewis, who is not only an esteemed actor but  one who holds both Irish and British citizenship – that Queen, she really knows how to stack a guest list!

Click through to see more of the official visit in photos >> The Queen of England and Irish President Michael D. Higgins Onlookers wave the flags from each nation. The Queen and the President are transported by carriage. President Higgins and the guards. President Higgins in conversation with a guard. Britain’s Queen Elizabeth II and Irish President Michael D. Higgins look at a fan as they view Irish-related items from the Royal Collection in the Green Drawing Room in Windsor Castle. Irish President Michael D. Higgins adjusts a ribbon as his wife, Sabina, looks on during his visit to Westminster Abbey before an Irish solider lays a wreath at the grave of the Unknown Warrior. Irish President Michael D. Higgins and Britain’s Queen Elizabeth II pose for a photograph ahead of a State Banquet during the Irish president’s visit. Queen Elizabeth II delivers a speech during a State Banquet in honour of the President of Ireland Michael D. Higgins.