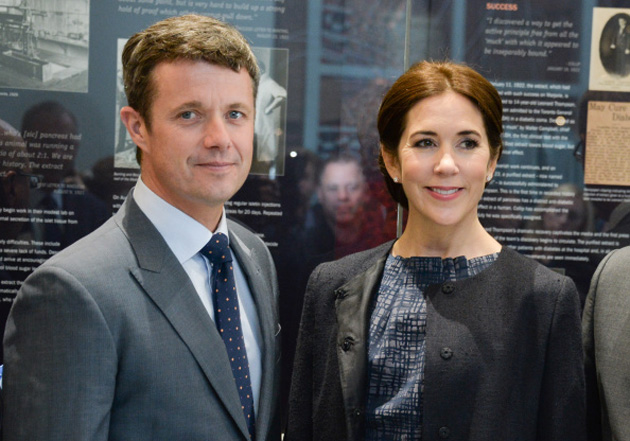 Real European royalty was hanging out in my Distillery neighbourhood on Thursday and I was hanging out with them.
His Royal Highness Frederik, Crown Prince of Denmark, heir to the Danish throne, was at the table beside me at lunch in the Fermenting Cellar and although we didn’t exactly rub shoulders, he was only a couple of meters away.
Alas, he was seated with his back to me so I couldn’t see his boyishly handsome face all through the meal or whether he finished his vegetables.
Maybe it’s because of Hamlet, but there’s something about standing beside the Prince of Denmark that’s special, beyond simply being in the presence of royalty.
Or maybe it’s because Danish modern furniture and Dansk tableware were the objects of desire during my young adulthood all those years ago.
And who could forget those yummy open-faced sandwiches at Georg Jensen on Bloor?
The future King and Queen of the Danes came to Toronto for a couple of days with a large trade delegation to encourage business between the two countries and to promote Danish companies and products, from underwear to insulation.
Mary, Crown Princess  of Denmark– an Australian by birth and upbringing — didn’t lose her composure for a moment when she stopped by the CR7 display of men’s briefs named for soccer star Cristiano Ronaldo.
Both the Prince, 45, and the Princess, 42, were dressed in shades of grey.
Her Royal Highness, a tall, slim Kate look-alike with shiny dark brown hair sleekly braided in a low bun at her neck, wore a knee-length dress, boxy black jacket and black stiletto heels with bare legs.
The couple who have been married for 10 years left their four children, including twins, back home at the castle.
After stopping at Balzac’s for coffee, the royals and their entourage visited every display of the Danish companies taking part in the trade mission, spread over three Distillery locations. Together, they sampled some of the foods, including familiar Castello blue cheese and Venskab beer, a tasty brew with an herbal hint that’s a collaboration between Ottawa’s Beau’s Natural Brewing Company and Denmark’s Kissenmeyer Beer; Venskab is available at LCBO.
Then, while the Prince visited the Danish building supply and industrial delegates, including Velux skylights and Roxul insulation, the Princess peeled off to the fashion and accessory exhibits.
Seeing the apparel of a dozen or so Danish fashion houses in the same place was a striking reminder of the simple elegant designs in muted neutrals that Denmark is famous for. Labels included Inwear and Whiite, which, a company rep confided, is worn by the Crown Princess.
On Friday, the royal couple will officially open a 3-week pop-up shop of Danish goods at the Bay in downtown Toronto.