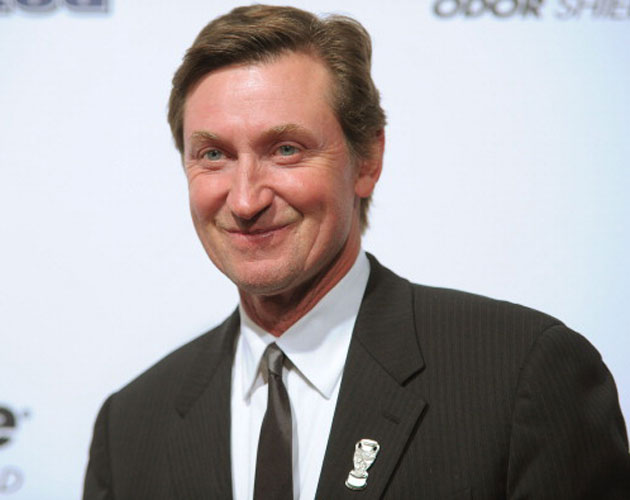 Today is birthday of hockey legend Wayne Gretzky. He turns 54. To honour one of this country’s most recognizable sons (with a nod to the fact he appeared on the first cover of Zoomer magazine), we’ve traced the top 10 milestones of the Great One’s life. Happy Birthday, Wayne! Scroll down for highlights of Gretzky’s career.

Born in Brantford, Ont., on Jan. 26, 1961, from his first time on skates, you could tell Gretzky was going to be a star. Young Wayne scored his first goal playing for Brantford at age 6. A few seasons later, he potted an amazing 378 goals in 72 games. Above his dad Walter talks about obsessed Wayne was with hockey as a child.

Stump your friends with this trivia question. Many forget that Gretzky’s first pro hockey experience came in 1977, in the now-defunct World Hockey Association. Playing for the Indianapolis Racers, Gretzky scored this goal against the Edmonton Oilers, a team he would later star for in the National Hockey League.  The play-by-play a announcer sums it up best: “I have a feeling that’s the first of quite a few we’ll be seeing from Wayne Gretzky.” Just for the record, here’s his first NHL goal.

Always a scorer, seldom a fighter, Gretzky did drop the gloves a few times, including this dance with fellow lightweight Neil Broten in 1982. After this, he decided to leave the fighting to the big boys. Although a lot of players tried to rough up Gretzky, not many were successful. Besides the fact his personal bodyguard Dave Semenko was always lurking close by, Gretzky was a shifty player who managed to avoid contact. Except for one night in 1981, when Keith McCreary, a little-known player for the Maple Leafs, caught 99 with his head down and really laid him out.

Despite all his astounding scoring feats and trophies, Gretzky’s team repeatedly failed to win a Stanley Cup. However that all changed in 1984, when he scored two goals defeating the New York Islanders to win hockey’s Holy Grail. As Bob Cole says in this video “He’s got to be feeling on top of the world now!”

When Edmonton Oilers’ owner Peter Pocklington got into financial trouble, he had to sell his most valuable asset: Wayne Gretzky. In August 1988, Gretzky announced in a tearful press conference that he had been traded to Los Angeles Kings. The reaction in Canada ranged from shock and disbelief to anger at Gretzky’s wife, Hollywood actress Janet Jones whom everyone felt was the force behind the trade.

When Gretzky moved to L.A., he became a North American sensation. This opened doors into the entertainment industry, including talk show appearances, commercials and his own Saturday morning cartoon (and later cereal) called Pro Stars, which appeared in the early ’90s. Skip to 2.38 in this video and watch cartoon Gretzky fight crime along with Bo Jackson and Michael Jordan. But his first foray into television came in 1981, when he made a cameo appearance on the Young and the Restless where he played a mobster from Edmonton. Sadly, there is no video evidence left of this soap opera appearance and his memorable line: “I’m Wayne from the Edmonton operation.”

In 1989, Gretzky scored a goal to pass Gordie Howe and become the all-time points leader in NHL history. Fittingly, he scored it against his former team, the Edmonton Oilers.

After L.A. owner Bruce McNall got into financial difficulties (a recurring theme) Gretzky was once again traded. He had a mostly forgettable stint with the St. Louis Blues before signing with the New York Rangers where he played his last game on April 18, 1999.

After retiring as a player, Gretzky switched his focus to hockey management. In 2002, he assembled a group of NHL players to compete in the Olympic Games in Salt Lake City. After Canada got off to a poor start, the Canadian media became highly critical of the team’s subpar performance. Sensing he needed to take the heat off the players, Gretzky held his now famous “crock of crap” press conference. This seemingly energized the team and they went on to win the gold medal against the U.S.

After Olympic glory, Gretzky, wife Janet and the couple’s five children moved back to L.A. In August 2005, he made the surprising decision to get back into the game as coach and co-owner of the Phoenix Coyotes. The Coyotes were a mediocre outfit and Gretzky had many frustrating nights. He stayed for three years before calling it quits. Gretzky now devotes much of his time to his charitable and business interests, including his winery in Vineland, Ont.  He was most recently in the news this past February, as part of the Olympic torch lighting ceremonies at the 2010 Olympic Games in Vancouver.