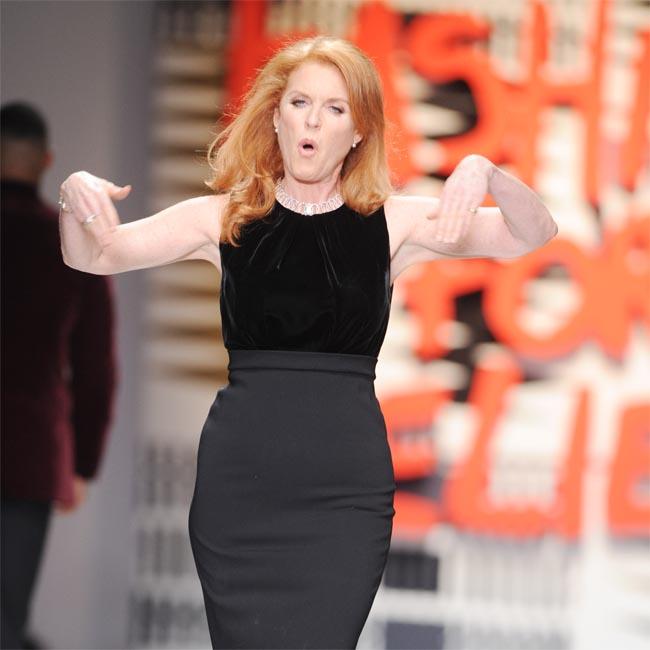 Sarah Ferguson took to the catwalk for the Fashion For Relief show yesterday (19.02.15).
The Duchess of York strutted her stuff on the runway at the event, which was put on to raise money for Ebola victims, at London’s Somerset House to launch London Fashion Week and received a great reception.
The 55 year old was cheered on as she strolled down the catwalk in a floor-length black shirt and a black top and appeared to be thoroughly enjoying herself as she stretched her arms out wide, pointed at herself and threw her arms around in a circle, all with a huge grin on her face.
When she got to the end of the runway she pulled off the standard model pose of one hand on her hip to perfection and turned to walk back.
Following the show, Sarah took to her Twitter account to personally thank Naomi for helping to put on the spectacle.
She wrote: “#FashionForRelief #london An amazing cause to support the fight against Ebola. Thank you @NaomiCampbell
“Help fight Ebola #FashionForRelief @ChildrenCrisis (sic)”
Naomi also took to the catwalk in a glittering gold outfit and fellow model Jourdan Dunn also wowed on the runway in a number of outfits, including a metallic checked minidress.
One of the main attractions of the night was the sight of former model Katie Price dressed in a black suit complete with black bow tie on the runway, while singer Pixie Lott sported a pair of fluffy rabbit ears.
Legendary fashion designer Dame Vivienne Westwood also walked the catwalk at the event.