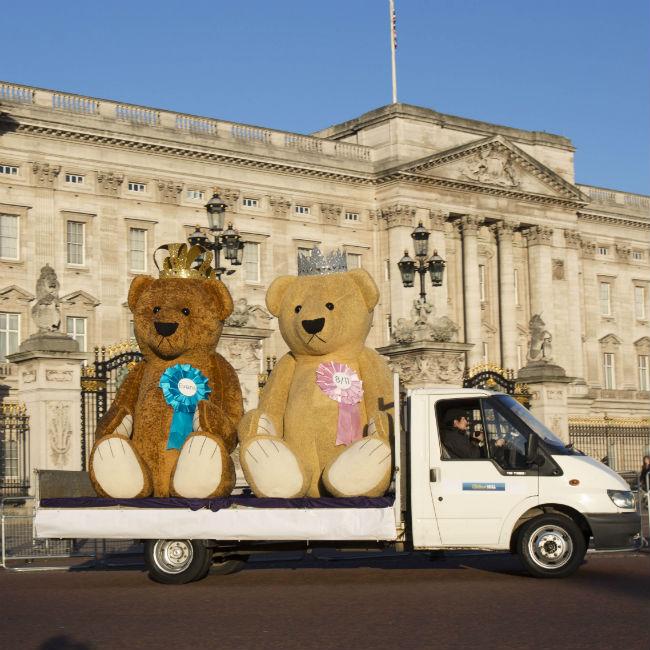 Britain’s Prince William and Duchess Catherine have been given two 10 ft tall teddy bears.
The royal couple have been gifted the two toys to celebrate the imminent birth of their second child, due later this month, with the cuddly creations spotted arriving at Buckingham Palace.
The giant bears were created by Britain’s biggest bookmaker, William Hill, who chose to make a male teddy and a female teddy, each bearing the odds on whether the new arrival would be a boy (evens) or a girl (8/11).
As well as the gender, the bookmaker is taking bets on the name, which will be chosen for the younger sibling to Prince George, with odds of 2/1 for it being called Alice, and 14/1 for James.
Spokesperson for the company, Rupert Adams, said: “We wanted to do something spectacular to show our excitement for the latest addition to the royal family. Royal baby fever has gripped the nation and punters are buzzing to find out whether it is a boy or a girl. The smart money is on a baby girl by the name of Alice born on the same day as her great-grandmother Queen Elizabeth – April 21st.”
Meanwhile, the least likely names for the baby have also been revealed, with Kanye and Taylor each having odds of 500/1.
The spokesperson added: “It is well documented that the William and Kate love their pop music so it’s not beyond the realms of possibility that they may choose a celebrity style name for the forthcoming baby. For those that fancy a longshot, Kanye and Taylor are the names that will give the best return.”