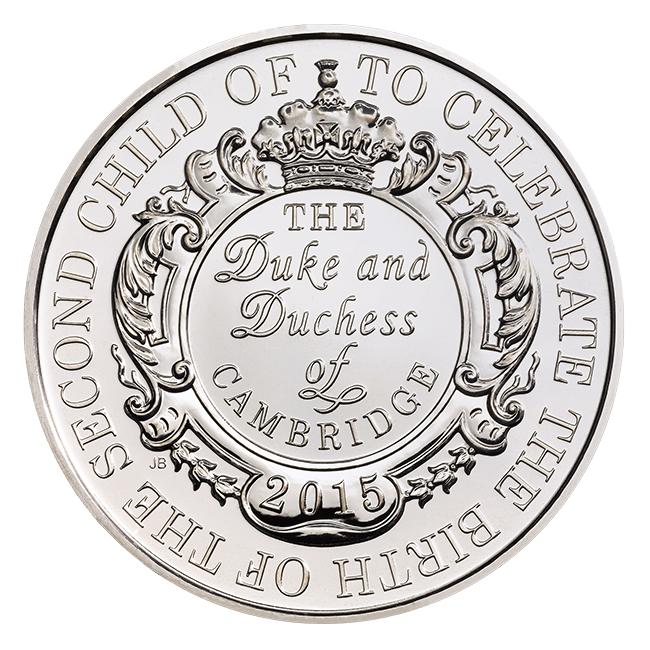 The Royal Mint have unveiled a £5 coin to commemorate the birth of the Duke and Duchess of Cambridge’s baby girl.
9,500 silver coins will be made whilst there will be just 400 gold ones. Both depict Britain’s Queen Elizabeth II on one side whilst the other side – designed by John Bergdahl – reads: “To celebrate the birth of the second child of the Duke and Duchess of Cambridge”.
Shane Bissett, Director of Commemorative Coin at the Royal Mint said: “The birth of a new Royal baby is a joyous occasion, not just for Their Royal Highnesses, The Duke and Duchess of Cambridge, but for the whole nation.
“It is only fitting that we commemorate this new addition to the Royal Family with the release of a special coin, just as we celebrated the arrival of Prince George.”
Duchess Catherine gave birth to the new princess yesterday at 8.34am and Prince William was later seen bringing the couple’s 21-month-old son Prince George to visit the little girl.
The exciting news of the birth was confirmed by a statement on Kensington Palace’s official Twitter account.
It read: “Her Royal Highness The Duchess of Cambridge was safely delivered of a daughter at 8.34am. The baby weighs 8lbs 3oz. The Duke of Cambridge was present for the birth.
“The Queen, The Duke of Edinburgh, The Prince of Wales & The Duchess of Cornwall, Prince Harry & members of both families have been informed. Her Royal Highness and her child are both doing well.”
The royal couple have since thanked the public for their well wishes.
The statement read: “The Duke and Duchess are hugely grateful for the messages of congratulations they have received from people all over the world. It means a great deal to them that so many people have celebrated the arrival of their new daughter.”