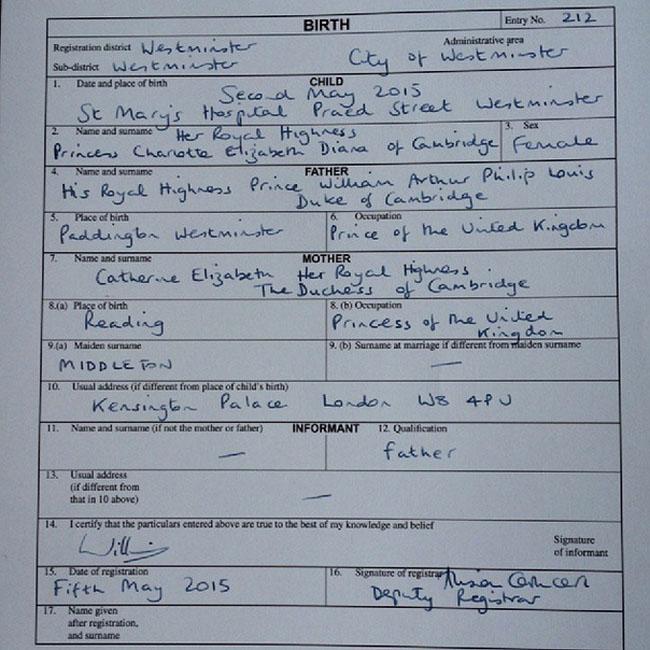 Britain’s Duke and Duchess of Cambridge have registered the birth of Princess Charlotte.
The couple announced the news on Instagram, just three days after the tot was born at St Mary’s Hospital in London on Saturday (02.05.15).
A statement from Kensington Palace read: “The Duke and Duchess of Cambridge have formally registered the birth of Princess Charlotte. The Duke of Cambridge signed the birth register at Kensington Palace this afternoon, witnessed by a Registrar from Westminster Register Office.”
In a snap of the form posted on the photo-sharing site, details of her parents have been filled in by 32-year-old Prince William, while the family’s address is listed as Kensington Palace, despite the fact they are planning to raise Charlotte at Anmer Hall on the Queen’s Sandringham estate in Norfolk.
The princess – whose parents announced they had decided to name her Charlotte Elizabeth Diana on Monday (04.05.15) – is now fourth in line for the throne, after her grandfather Prince Charles, father Prince William, and older brother, 21-month-old Prince George.
The registration of her birth comes after she was introduced to her great-grandmother, Queen Elizabeth II, at Kensington Palace earlier today (05.05.15).
On Sunday (03.05.15), the Duke and Duchess thanked people for their well-wishes, admitting it meant a “great deal to them” to have received such a positive reaction to their second child’s birth.
A statement read: “The Duke and Duchess are hugely grateful for the messages of congratulations they have received from people all over the world.
“It means a great deal to them that so many people have celebrated the arrival of their new daughter.”