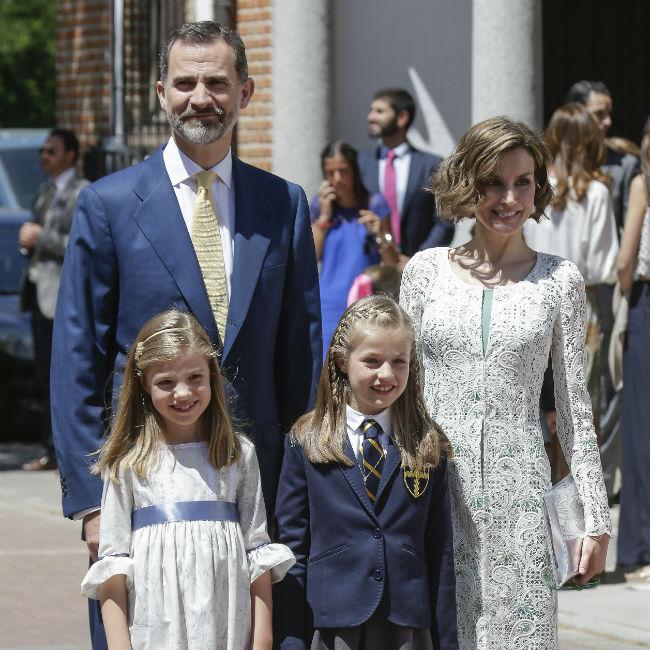 Princess Leonor of Spain had her First Holy Communion yesterday (20.05.15).
The nine-year-old heir presumptive to the Spanish throne was accompanied by her parents King Felipe VI and Queen Letizia of Spain, as well as her younger sister Princess Sofía, as she arrived at the Asunción de Nuestra Señora church in Aravaca.
The young princess was dressed smartly in her navy and grey school uniform, wore a rosary around her neck, and had her blonde hair swept back into two side plaits, while her eight-year-old sister Sofía wore a white dress with a big blue bow, and a headband to match.
The girls’ mother Queen Letizia wore a pale green dress and a white guipure lace coat, as well as some quirky transparent peep-toe heels.
As the family arrived, along with Letizia’s relatives and Felipe’s parents, Juan Carlos I and his wife Sofia, Princess Leonor politely turned to photographers and gave them a big smile and a wave and giggled with her sister Princess Sofia.
When Juan Carlos I abdicated the throne in favour of his son in June 2014, his granddaughter Leonor became the youngest heir presumptive in Europe, and, once she actually takes the throne, she will be Spain’s first queen since Isabella II, who reigned from 1833 to 1868.