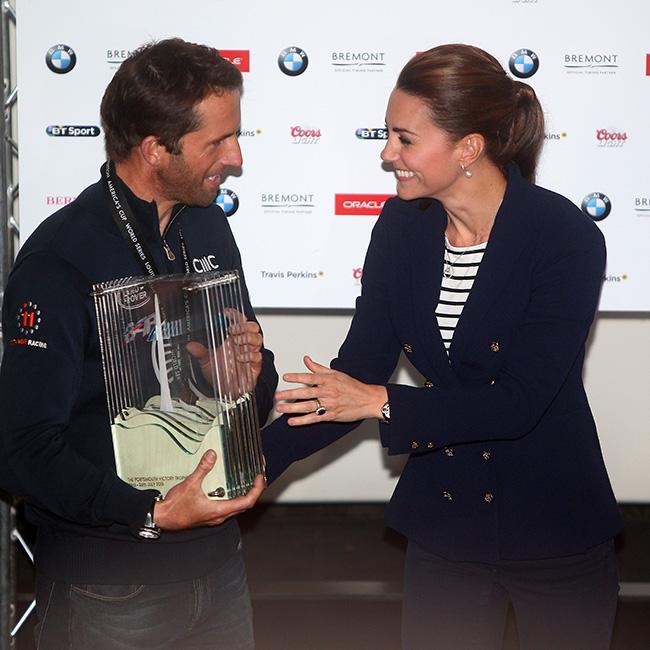 Britain’s Duke and Duchess of Cambridge presented Sir Ben Ainslie, with a trophy for winning the Portsmouth leg of the Louis Vuitton America’s Cup World Series race.
The gold medalist and his team celebrated with champagne at the event held in Portsmouth, England on Sunday (26.07.15), where Duchess Catherine and Prince William braved winds of up to 30-miles-per-hour.
The royal couple were spotted wearing matching fleeces at the celebrations after the Cup was called off because of the bad weather.
A woman called Ella, who gave the tops as a gift said they were both “very nice”.
She told the Daily Mail newspaper: “She [Catherine] said they were very nice. I’m sure they will fit perfectly.”
Early on Sunday morning, the Duchess and Duke were given a guided tour of the headquarters by Sir Ben, and Catherine even had a go on a sailing simulator.
The Duchess joined Sir Ben alongside a ship’s wheel and had to wear a pair of virtual reality goggles.
Catherine was overheard calling the experience “weird” despite being able to cope with ride, which makes you feel like you are sailing at 15 knots.
Ben Ainslie and his team celebrated with Moët & Chandon, the official champagne sponsors of the Louis Vuitton America’s Cup World Series in Portsmouth (Photo by Charlie Crowhurst/Getty Images for Moët)