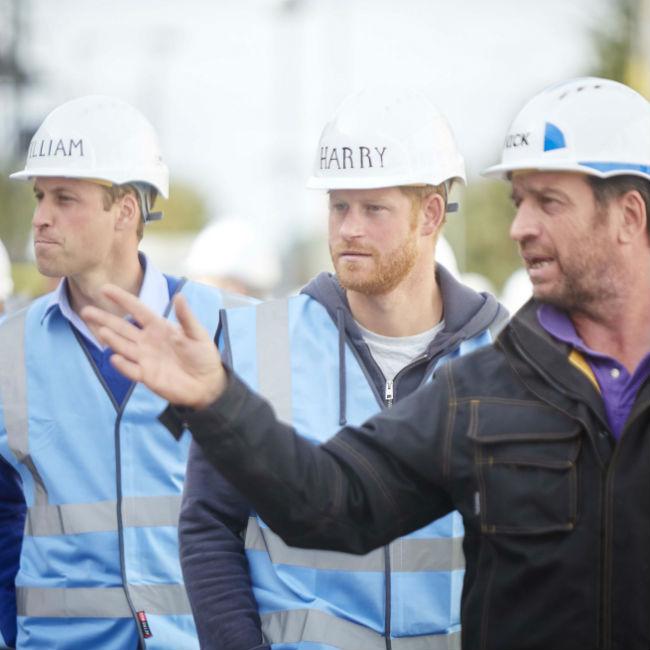 Britain’s Princes Harry and William joked with builders on the set of ‘DIY SOS’.
The 30-year-old royal and his older brother, the Duke of Cambridge, 33, joined forces with the show’s host Nick Knowles and a team of builders to help restore homes for veterans.
The brothers – who are the sons of Prince Charles and the late Princess Diana – poked fun at Nick and the other volunteers, claiming their own work was much better.
Pointing at Nick’s painting, William said: “I think yours is a little bit weak. Look at that [points to his own paint job], that’s perfect.
“What’s going on there? This is the first time you’ve done this, isn’t it?”
However, William – who has children Prince George and Princess Charlotte with his wife Duchess Catherine – wasn’t the only one to boast about his efforts as Harry also joked that the builders were welcome to watch him lay pavement slabs if they wanted to pick up some tips.
He said: “If you want to learn then stay behind and watch obviously.”
And the flame-haired prince was less than impressed when the show’s resident electrician Billy Byrne asked if he could refer to him as “sausage”.
Told that’s what he usually calls people, Harry replied: “If you’re going to call me sausage, it’s going to be a very long day.”
Harry and William appeared on ‘DIY SOS’ last night (14.10.15) on BBC One.