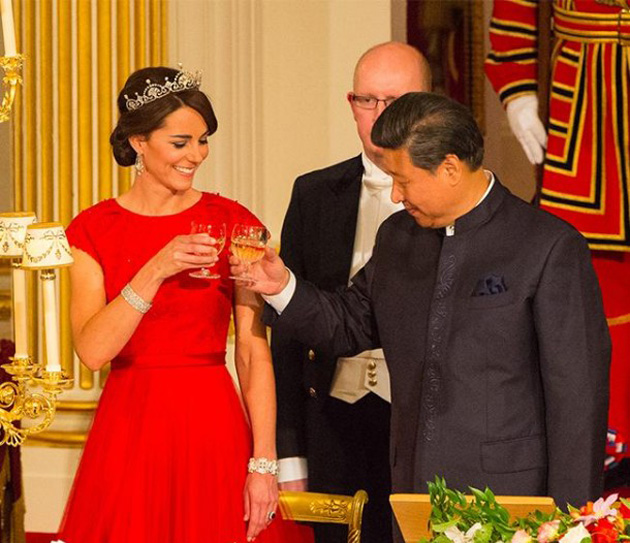 Britain’s Duchess of Cambridge stunned in a red dress and tiara as she took part in her first state banquet.
The 33-year-old royal chose a beautiful striking gown with capped sleeves and a belted waist – which was created by her favourite designer Jenny Packham – for the official engagement.
Fashion designer Elizabeth Emanuel – who co-designed the late Princess Diana’s wedding dress – said: “Red is very important as a statement in itself as it matches the colour of the Chinese flag and it means good fortune.
“It’s elegant and graceful, which shows off her figure as well. Even after her second child, you can see she has the most beautiful figure.
“She’s a young woman and the capped sleeves are perfectly appropriate and scooped neckline is elegant. Her hair in a chignon is beautiful as well. She just looks absolutely right for the occasion – glamorous but not over the top.”
The mother-of-two – who has five-month-old daughter Princess Charlotte and two-year-old son Prince George with her husband Prince William – also chose to wear the Lotus Flower tiara, first worn by the Queen’s mother in the 1920s.
Speaking about the stunning accessory, expert Leslie Field told PEOPLE magazine: “It’s one of the only two she has worn. She wore it for the diplomatic reception, which is a state occasion.
“It was worn by Princess Margaret when she was young and it has a youthful image. And it was originally the Queen Mother’s and she wore it as a young married woman as well.”