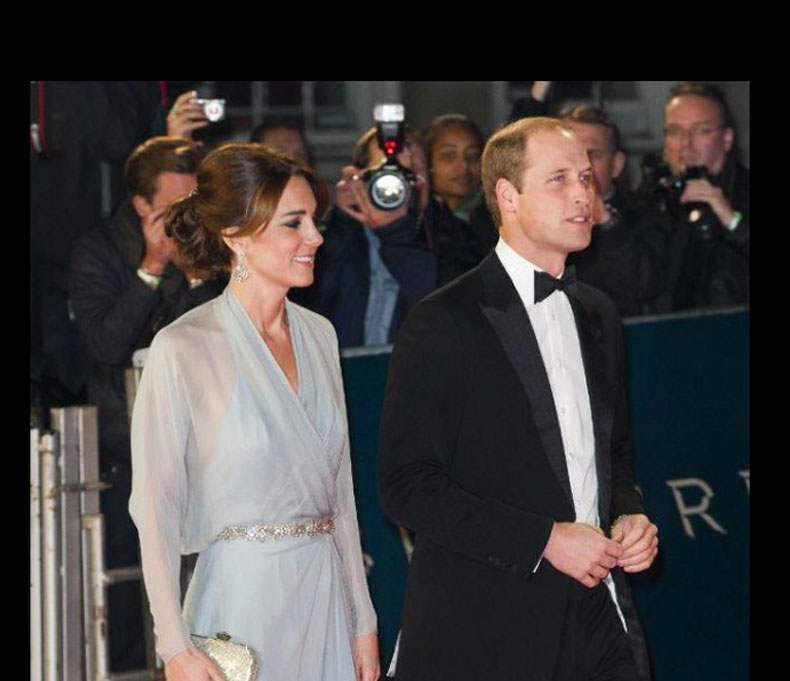 Duchess Catherine and Prince William attended the ‘SPECTRE’ premiere at London’s Royal Albert Hall on Monday (26.10.15).
The royal couple were joined by William’s brother Prince Harry as they mingled with the stars of the latest film in the spy franchise, including Daniel Craig, Monica Bellucci and Lea Seydoux.
Catherine wowed in a stunning semi-sheer gown designed by Jenny Packham.
The long-sleeved dress featured a crystal-embellished belt and gaped open at the back to reveal a hint of skin.
She carried a Jenny Packham clutch and wore a pair of Robinson Pelham earrings, similar to those her mother Carol Middleton has previously been seen wearing.
Catherine wore her hair in an elegant updo and opted for a pair of gold Jimmy Choo sandals.
Princes William and Harry were both dapper in tuxedos as they accompanied Catherine to the movie event.
The trio arrived at the premiere in a chauffeur driven Bentley and were met by the producers of ‘SPECTRE’, Barbara Broccoli and Michael Wilson, and director Sam Mendes.
The premiere of the movie was held as part of the CTBF Royal Film Performance, which is held annually in aid of the Cinema and Television Benevolent Fund, the charity for the UK Film, cinema and commercial television industries, dedicated to providing support for those working behind the scenes in times of hardship.
‘SPECTRE’ is the third Bond film chosen as a Royal Film Performance since its inception in 1946.