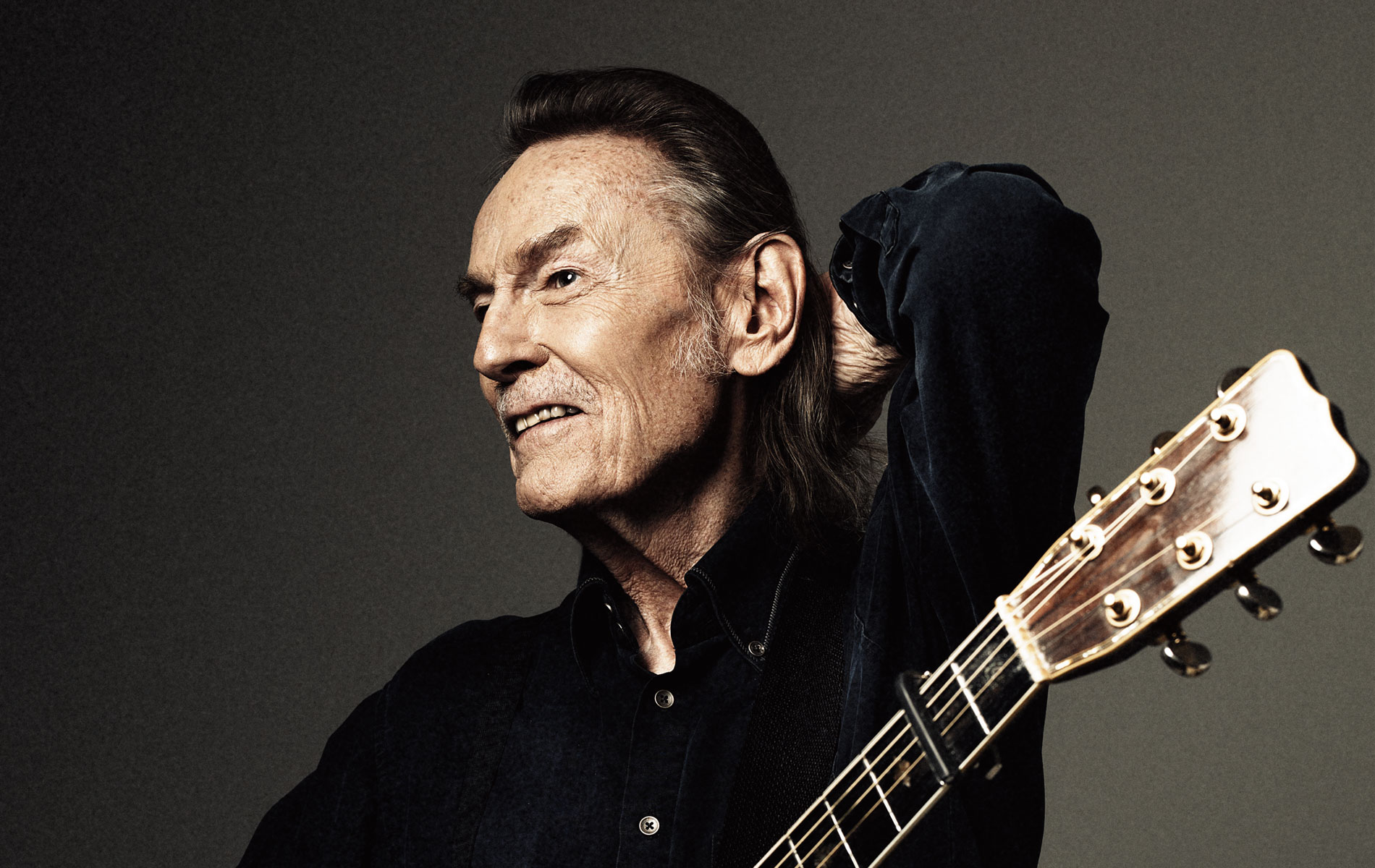 This month (Nov. 17), the Canadian folk icon Gordon Lightfoot turned 77-years-young. Here, read our interview with the singer, songwriter and national treasure from the March 2011 cover of Zoomer.

David Livingstone sits down with Gordon Lightfoot, singer and learns that rumours of his death are greatly exaggerated.

“When the skies of November turn gloomy.” With those spare words from “The Wreck of the Edmund Fitzgerald,” Gordon Lightfoot took ownership of fall in a northern land. He owns Canadian spring, too. In “Did She Mention My Name?” he refers to “when the late snow turns to rain” and, just in passing, nails another particular misery that belongs to this great land.

But on a November afternoon when the sky is doing exactly what he said it would, Lightfoot, looking out the window, pretends to see nothing more than signs that “there’s going to be snow tonight.”

He laughs after he says it, as if to acknowledge that he knows he’s done better, as if to say that his impersonation of homespun meteorologist is a pose. Still, don’t expect the lyricism of his songs to pour out of the man just like that.

“I’d have to start talkin’, like, in poetic terms,” he says, going out of his way to make himself sound prosaic.

“I can’t do that. I can only do that when I sing and play. I’m just a normal, everyday person.”

Even if his remark is taken as a reflection of his high opinion of everyday people, Lightfoot’s self-esteem stays within the limits of modesty and scarcely recognizes the many ways in which he’s exceptional.

A national treasure — institution, icon, beloved at home and one of Bob Dylan’s favourites, all that — he has managed to stay not forever young but forever cool, which is an even greater accomplishment.

On the subject of age, Lightfoot, who went 72 in November, says, “It doesn’t bother me.”  Near dying left him equally unfazed. When people wonder what it was like when a ruptured abdominal aneurysm left him unconscious for six weeks back in 2002, he tells them, “It was probably the most quiet, peaceful time I’ve spent in my whole life.”

And he can laugh about death. Last year, calling into a radio station that had reported his demise, a wildfire story said to have started on the Internet, he nixed the rumour and joked about all the airplay it got him.

That was clear from the minute he arrived at the Toronto studio where he was to be photographed and interviewed. He’s grizzled and skinny, with cheekbones like rocks, a strong profile, square shoulders that forbid bad posture and a pent-up energy he attributes to the four, five, six times a week he works out at a gym.

Meanwhile, it’s a lifetime of performing out on the road — 81 dates last year — that taught him to travel light. He knows what he likes to wear and how to carry it in one bag. Today, among the pieces he’s packing is a tapered and cropped blue velvet jacket that is practically foppish. “Black jeans,” says Lightfoot, “and it works.”

But when I ask if he’s vain, he answers,  “Ain’t we all,” again retreating into his de- fault disguise of being no one special.

Having grown up in Orillia, in rural Ontario, Lightfoot has always identified with the salt of the earth. Back in 1966, six weeks after the release of his first album, he told the Globe and Mail, “I guess you could call me a cosmopolitan hick.”

He still goes out of his way not to give himself airs. He’ll try to tell you his routine is “more mundane than most people would ever believe.” Outlining a typical day, he gets no further than “I get up early, at eight o’clock,” before he feels obliged to recognize that there are lots of people who get up a lot earlier.

“Running my little office … going to the gym … looking after my family” — Lightfoot doesn’t do a bad job of portraying himself as the guy next door. That doesn’t mean he’s lying when he sings about having been “stood up” and “shut down” or doing “what you don’t confess.”

Lightfoot’s personal life has not been all pussy willows and cattails. As a boy, he sang at weddings, tunes such as  “O Promise Me.” On his very first album, he became the hard-bitten loner, serving notice that he had commitment issues with “For Lovin’ Me” and “I’m Not Sayin’.” Sometimes he would choose music as a priority and lose a relationship. “That happened quite a few times.”

Drinking, which he quit in 1983, made for messes and regrets. However you calculate the convolutions of Lightfoot’s love life, he casts his romantic past in a kindly, sometimes comic, light.

Speaking of the first of two marriages (which ended in a 1973 divorce settlement that made the front page of the Globe and Mail), Lightfoot remembers his wife as “an excellent woman.”

Remembering the hip, circular high-rise apartment he moved into when he moved out of their home, he says, “I saw Toronto from quite a few angles,” and he’s not just talking about the view. “I actually didn’t have any choice with a lot of my moving around. I got told.”

Even when I mention Cathy Smith, the old girlfriend who dragged his name into tabloid territory when she was charged with having administered the drugs that killed John Belushi, Lightfoot breezes past the reference, saying nothing mean, only, “I haven’t seen her
for years.”

Today, he seems more than happy with his family of five children (aged 16 to 46, from three mothers) and four grandchildren. A modern father, he boasts, “I interact with them all.”

Lightfoot’s son, 29, and his cat live with him. Otherwise, he’s alone — not such a chore for a man who doesn’t mind saying, “I like to look after my own business and do stuff my way.”

At the shoot and during the interview, Lightfoot is accompanied by Bernie Fiedler, who used to run The Riverboat, the Toronto coffee house where he was instrumental in launching some of Canada’s most successful singer-songwriters, including Lightfoot, Bruce Cockburn and Joni Mitchell. Fiedler still runs an artist management company, but he explains his presence by saying, “I’m Gordon’s longest and best friend.”

Although Fiedler is involved with booking — a May tour is already scheduled for Ontario, including one of the concerts at Massey Hall that Lightfoot’s been playing since the 1960s at roughly 18-month intervals — he tells me, “Gordon more or less manages himself.”

When not on tour, Lightfoot prepares for the next one. There are practices with the band, some of whose members have been playing with him for more than 30 years. Since Lightfoot’s post-aneurysm recovery, they’ve been teaching themselves new tricks, turning what he calls “good solid tuning” into “absolute tuning,” an ideal that spurs them on.

Lightfoot listens to what’s on the radio and buys a few CDs, the last being the latest Neil Young, but otherwise he concentrates on his own music. He practises the guitar a lot while following the games on TV. And he follows them all: hockey and football, both the CFL and NFL.

Lightfoot, of course, has been singing even longer than he has been picking. He grew up under the influence of four aunts, on his mother’s side, who sang together. Their last name was Trill, as if that couldn’t be an omen.

“The voice is good,” says Lightfoot, assessing the current state of his baritone. “I’m very lucky.”

“What pleasure do you find in being able to sing?”

“I love the communication. It’s there and I can feel it. I really like performing live. Some maybe might say, ‘He’s doing that because he’s not doing the other. He’s not making records, so he’s performing instead.’ But I love to perform.”

Lightfoot last released a new CD in 2004, but he’s in no hurry to put out the kind of recording that veterans sometimes do to keep their hand in the game. He’s not interested in doing an album of duets — a shame since he would get to use what his aunts must have taught him about harmony. And he’s one of the few recording artists who has not issued a Yuletide collection, even though for almost 40 years he’s sung on Christmas Eve at Toronto’s Rosedale United Church.

Lightfoot sang in church as a boy and allows that whatever religion was instilled then lives on “to a certain degree.” As for politics, he says, “I’m not very political. I watch.”

And what he sees does not support any notion that much is changing. “I think history repeats itself. That worries me. That’s a little bit scary. I know that there are some mighty big things coming down in the next while – If you ask me, there are so many developments going on between nations — and the economy — it’s all very dicey.”

Wary of the times, Lightfoot is nothing but satisfied about the places he’s been. A veteran of some of Toronto’s loveliest and priciest residential neighbourhoods, he maintains a small-town boy’s appreciation for the city. “I love Toronto. I was happy to be able to live here early in my career.”

He comes closer to gushing when I ask him about Canada. “I think it’s the best country in the world,” he says.

“What makes it that?”

“What it is,” he answers sparely, dropping all sentimentality. “It’s a huge country. A lot of it is virgin territory. A lot of it’s cold. It’s very cold.”

And he’s been to every bit of it. For 10 years, from 1973 to 1983, major canoe expeditions in northern Canada were routine. “It was absolutely unbelievable. You had to be there to believe.” You also had to be a “little bit masochistic” to do it in the first place, to think of “20 miles a day of hard track” as fun.

Despite occasional lapses into studded denim with white boots, Lightfoot is tough and has taste. Not guarded — he doesn’t have to be. Having stuck to high musical standards throughout his career, he instils respect without insisting on it, somehow managing to convey an expectation of gentlemanly conduct from others in return for his own.

Talk of taste, of course, is the kind of potentially pretentious thing that Lightfoot likes to avoid.

“What offends your sense of taste?

“Nothing really. I just take people the way I find them. I’m not judgmental. I’m a patient person.”

“No question. I’m serious,” Lightfoot allows, adding, without needing to, “But I’ve got a sense of humour that comes out every once in a while.”