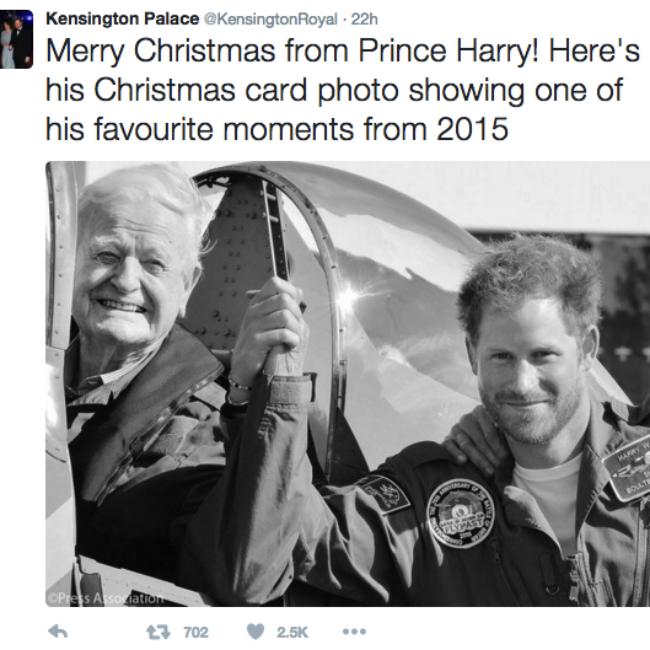 Britain’s Prince Harry’s Christmas card features a photo of him and war veteran Tom Neil.
The 31-year-old royal has had a busy year touring Africa, carrying out military work in Australia and New Zealand, receiving a knighthood from his grandmother the Queen, being involved in the Rugby World Cup and meeting the Obamas, but has revealed one of his favourite moments of 2015 was meeting Neil at the Battle of Britain flypast in September.
The official Kensington Palace Twitter account posted a photo of Harry’s festive card alongside the caption: “Merry Christmas from Prince Harry! Here’s his Christmas card photo showing one of his favourite moments from 2015.”
The image shows a clearly thrilled Prince Harry holding hands with 95-year-old Neil at the event at the Goodwood Aerodrom in Sussex, South West England, which took place on the flame-haired royal’s 31st birthday.
Harry had been due to take part in the flypast to mark the 75th anniversary of the victorious Battle of Britain.
But when one of the aircrafts was deemed unserviceable, Harry gave up his seat so Neil and two other wounded servicemen could take part as scheduled.
Other members of the royal family have also recently revealed their Christmas cards.
Harry’s father Prince Charles and his wife Duchess Camilla chose a photograph of them cuddling up to each other in the countryside during the summer while his brother Prince William and his wife Duchess Catherine opted for their family portrait photographed by Mario Testino at Princess Charlotte’s christening in July.
And Prince Philip chose a photo of himself and the Queen arriving at Royal Ascot earlier this year.