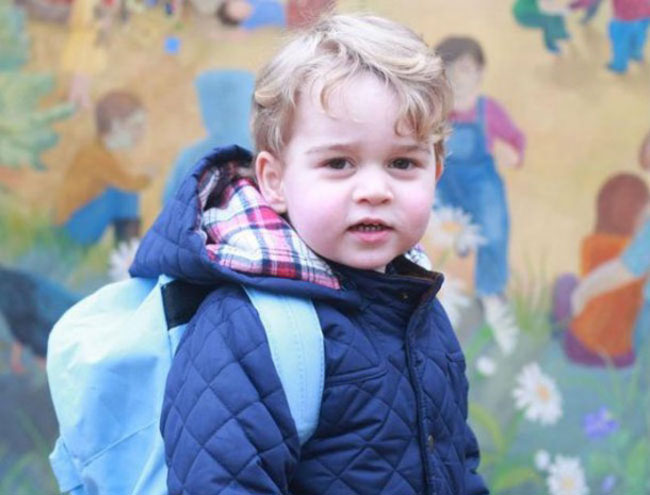 Prince George’s first day at nursery “went well”, according to royal sources.
The adorable tot, who turns two-and-a-half later this month, started the Westacre Montessori school in King’s Lynn, Norfolk on Wednesday (06.01.16).
His mother, the Duchess of Cambridge, turned photographer to capture the little boy’s journey into the school.
Wearing a padded blue coat and blue backpack, George looked excited as he headed inside, stopping to point at a colourful mural outside the property.
A source told Hello! magazine of George’s start at the school: “He’s going to be attending part time for a handful of hours per day. Both the Duke and Duchess dropped him off today and it seems all went well.”
The Duke and Duchess drove George to the school from their Norfolk home, Anmer Hall.
The nursery costs just £33 a day, £5.50 an hour, and is housed in a former chapel.
After it was announced last month that George would be attending Westacre, a spokesperson for the school said: “We are looking forward to welcoming George to our nursery where he will get the same special experience as all of our children.”
The Duke and Duchess are parents to George and daughter Charlotte.
In a recent interview, Prince William spoke about how his life has been changed by becoming a father.
On ‘When Ant and Dec Met The Prince: 40 Years of the Prince’s Trust’ earlier this week, William said: “I’m a lot more emotional than I used to be. I never used to get too wound up or worried about things.
But now the smallest little things, you well up a little more, you get affected by the sort of things that happen around the world or whatever, a lot more, I think, as a father. Just because you realise how precious life is and it puts it all in perspective.”