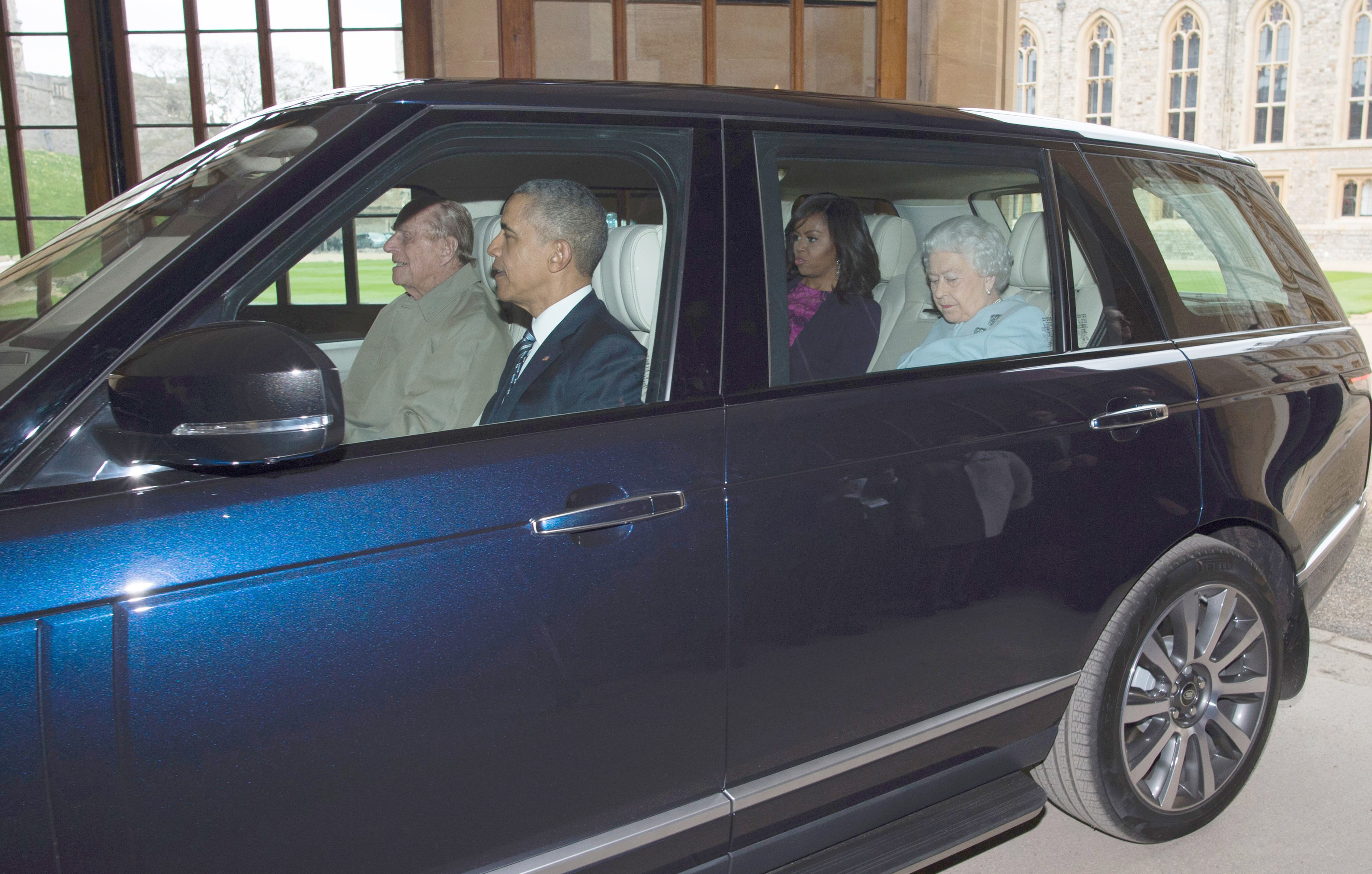 It’s sounds like the set-up for a joke but upon U.S. President Barack Obama’s arrival, alongside First Lady Michelle Obama, at Windsor Castle for a lunch double date with Queen Elizabeth II and Prince Philip earlier today, the Secret Service, Marines and body-armoured police on hand watched on as the most closely protected man in the world – who usually gets around in a tank-like, shotgun-armed Presidential Cadillac dubbed, “The Beast” – hopped into the front seat of a Range Rover driven by the 94-year-old Duke of Edinburgh.

Keep in mind that, in contrast to “The Beast’s” armour and shotguns, the Range Rover is equipped with “Rain sensing windscreen wipers” and something called “Follow-Me-Home lighting.” Still, the foursome enjoyed the ride from the lawn to the castle — a distance of about 400 yards — where they had lunch before the President departed to meet British Prime Minister David Cameron. Later today the President and First Lady will enjoy dinner with Prince William, his wife the Duchess of Cambridge, Kate Middleton and Prince Harry at the royal couple’s Kensington Palace residence.

A photo of the drive shows a strange seating arrangement, however, with the Queen tucked in the back with the First Lady while the President rides up front with the Prince. We’d have thought that President Obama would have sat in the back with the Queen, given they were the two principle leaders on board. The watching American press corps was caught on mic asking excitedly, “Is Obama actually going to drive?” perhaps thinking of Jerry Seinfeld’s series Comedians in Cars Getting Coffee where he drove a car around the White House grounds with a security guard not authorizing him to drive through the gates and off the grounds. President Obama has said that he misses the mundane things like walking around the block unrecognized and alone. And yes, driving.

That’s not Prince Philip’s problem, as it’s clear he has never stopped driving despite his advanced age, proving that all his “motor” skills remain in tact. After all, a day after the Queen’s 90th birthday celebrations, which kept Her Majesty and Prince Philip quite busy, the couple was all smiles as they spent time with the Obamas. And it’s no surprise really, given the schedule the royal pair keeps. Between appearances and trips and other public responsibilities, their calendar is busy enough to tire out monarchs half their age. In fact, they perform twice as many or more royal duties in a year more than the future King, Prince William, and Duchess Kate. We hope that Prince William and Kate Middleton enjoy the same stamina the Queen and Prince Philip do. Not a lot of young people are up early and ready to go for lunch the day after a major birthday bash!